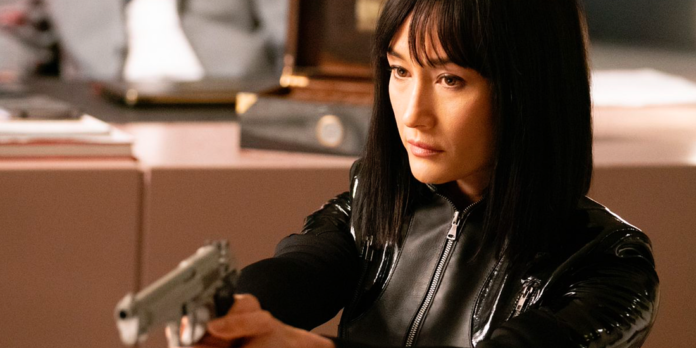 THE STORY – Rescued as a child by the legendary assassin Moody, Anna is the world’s most skilled contract killer. However, when Moody is brutally killed, she vows revenge for the man who taught her everything she knows. As Anna becomes entangled with an enigmatic killer, their confrontation turns deadly, and the loose ends of a life spent killing weave themselves ever tighter.

​​With the endless amount of action films that get released every year, it becomes necessary to find some methods of innovation to make a new project stand out. Generally, this would require some creativity in the storytelling but can also come down to casting a new light on the characters themselves. No matter what may be dangled in front of an audience to elicit the aura of novelty, the strength of the narrative takes precedence. “The Protégé” often struggles to have a cohesive story told in an engaging way. Yet, there is just enough to be entertained due to a strong lead and skilled artistry behind the camera.

The film centers around Anna (Maggie Q), a skilled assassin whose proficiency is thanks to the tutelage of Moody (Samuel L. Jackson). Moody is another assassin who rescued Anna as a child after a brutal attack in her home country. They now eliminate those who they deem to be evil-doers in exchange for vast sums of money. However, after prodding around for information regarding a particular case, Anna discovers Moody has been brutally murdered. This sends her on a path to find those responsible for his death, the individuals who happen to be the same ones looking to kill her as well. She ends up crossing paths with another experienced criminal (Michael Keaton), and the two partake in a dangerous game of cat and mouse, with Anna falling deeper and deeper into the conspiracy that will test every ounce of strength she possesses.

It’s pretty apparent that Maggie Q provides a striking presence as the film’s protagonist. She handles all of the action set pieces with a magnetism that is fierce and attentive. Not only that, but she also manages to carry the emotional beats well, even if those elements are not the most complex. Q is still the central fixture to most of what makes the film successful, and she commands every frame with a poise and ferocity that is entirely captivating. There is an awkward attempt to set up a combative romantic rapport with Keaton, which generally falls flat, but he still brings a fun sense of energy to his role, making him an inviting figure to watch. Jackson brings what is expected of him: a jovial yet curt personality with flavors of his “Pulp Fiction” performance. Films of this caliber are not particularly worthy of praise from the ensemble, and apart from the lead, there isn’t much here that meets the level of extraordinary.

The level of quality regarding its spectacle is what ultimately matters most in a film of this nature, and director Martin Campbell has had plenty of experience of delivering superb experiences. While he may have an inconsistent resume, helming two of the absolute best James Bond films and “The Mask of Zorro” fills one with confidence. There is undoubtedly an expertise on display in the filmmaking, with dynamic compositions and a playful style that sells the harsher tone. Indeed, while definitely aimed as low-stakes entertainment, the violence is graphic and potentially off-putting. However, this does help to establish the severe world these characters inhabit and, in truth, adds a greater euphoric emphasis when these moments are completed. There does remain an acknowledgment of its silliness, and the film blends these opposing tones rather gracefully. One can imagine that such a bloody display will be polarizing, but the lack of sanitizing these grizzly actions is a welcome change from the more generic action sequences in most films today.

The most glaring issues of the film, unfortunately, lie in its screenplay. Richard Wenk’s script is often an empty exercise that follows the breadcrumbs of an uncompelling mystery whose twists and turns are less than stimulating. The plot machinations often steer into the needlessly convoluted territory, peppered with clunky dialogue, stale humor, and ungainly banter. This is particularly felt in the finale, which loses an incredible amount of steam. At this point, the pacing gets lethargic, and the story chugs along to an anti-climactic ending. The main characters are given the most basic of backstories, which is more than can be said for the precession of hollow caricatures that make up the supporting cast. One is not necessarily expecting the most outstanding examples of prose, but the uninvolving setup and some questionable Asian representation make the story itself inert.

It’s hard to say anything is astounding about “The Protégé.” The subpar writing weighs down even the more successful elements, as the flat execution and wooden storytelling make the narrative fall apart the longer the film progresses. At the same time, one can also acknowledge the slick artistry of the filmmaking and the talents of the cast, nearly all of the latter due to Maggie Q’s commanding turn. It’s doubtful many will find this to be a wholly adequate submission of a uniquely expressive action film. Yet, it does contain some aspects that make it worthwhile, if not wholly successful.