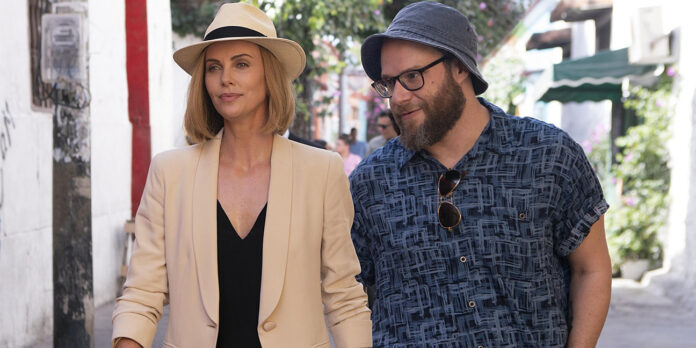 THE STORY – Fred Flarsky is a gifted and free-spirited journalist who has a knack for getting into trouble. Charlotte Field is one of the most influential women in the world — a smart, sophisticated and accomplished politician. When Fred unexpectedly runs into Charlotte, he soon realizes that she was his former baby sitter and childhood crush. When Charlotte decides to make a run for the presidency, she impulsively hires Fred as her speechwriter — much to the dismay of her trusted advisers.

​​”Long Shot” is a heartwarming story about being yourself and constantly standing up for what you think is right even if those in charge do not agree. This romantic, political comedy is filled with laughs and love from start to finish. The chemistry between Charlize Theron and Seth Rogen is wonderful. The political side of the film is timed flawlessly for our current climate making the film a bit more layered than your standard romantic comedy. O’Shea Jackson Jr. steals every single frame he is in and deserves to be in just about every movie that is made. The story does get a bit formulaic at times and most of what we’re seeing on screen, we’ve seen countless times before. But the chemistry between the characters and the comedy makes “Long Shot” worth seeking out.

After losing his current journalism position Fred Flarsky (Seth Rogen), reunites with his very first crush Charlotte Field (Charlize Theron), the current Secretary of State. Charlotte is soon announcing her run for President of the United States and decides to hire on Flarsky as her speechwriter. While attending different political outings the two begin to grow fond of each other and eventually begin falling in love.

The comedy within “Long Shot” is both smart, topical, and genuinely funny. It perfectly nails its jokes not only through timing but delivery as well from the actors. Each member of the ensemble is downright perfect in their inflection of jokes and silly situations. Aside from the comedy, the chemistry that Theron and Rogen share between one another within the romance is a pure joy to watch. It feels so genuine and is truly romantic at times while also having a side order of raunchiness, making the film the perfect trifecta in terms of genre. O’Shea Jackson Jr. is another brilliant addition to the cast because he absolutely steals the show. Whenever he is on screen almost all of his interactions and jokes are hilarious without ever missing a beat. Jackson’s presence proves that he should be in more comedies so he can flex that muscle more.

As if Charlize Theron hadn’t shown off her range enough to us throughout her career, she is continuing to just dazzle us with whatever role she is cast in. She’s absolutely excellent in this film and her performance never stumbles. Not only does she nail the more intimate and romantic scenes but her comedic timing and delivery are just immaculate. Theron is really what elevates this project to the next level, bringing it to a new platform aside from just being a simple romantic comedy.

The only downside to “Long Shot” is that it can be a bit formulaic at times. From the beats of the story and the way everything sort of unfolds it’s pretty easy to say, “we’ve seen this before.” Boy and girl fall in love, something separates them, but they’ll eventually wind up back together. We’ve seen it countless times and this film just follows in those footsteps. This is a pretty easy flaw to ignore though since you are constantly spending your time laughing and swooning over Theron and Rogen’s relationship.

“Long Shot” is a hysterical and timely film that has loads of heart behind it and within it. It was easily one of the bigger surprises to me here at the South By Southwest film festival. It does veer into some familiar territory that we have seen one too many times before. But that easily gets cast aside when we see just how much fun the cast is having. Charlize Theron is impeccable as always. Her chemistry with Rogen is incredibly rewarding. And O’Shea Jackson Jr. steals every single scene that he is apart of. “Long Shot” will be an enormous hit with audiences this summer.