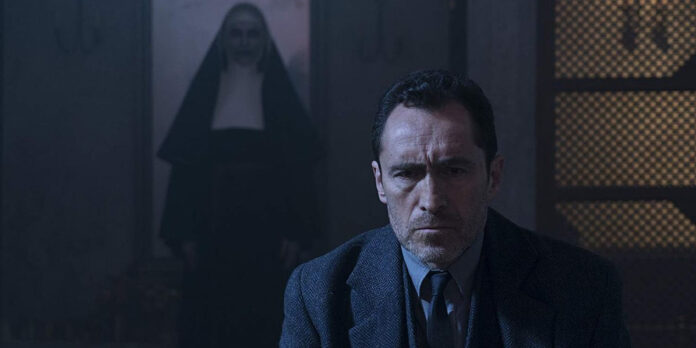 THE STORY – When a young nun at a cloistered abbey in Romania takes her own life, a priest with a haunted past and a novitiate on the threshold of her final vows are sent by the Vatican to investigate. Together, they uncover the order’s unholy secret. Risking not only their lives but their faith and their very souls, they confront a malevolent force in the form of a demonic nun.
​
THE CAST – Demián Bichir, Taissa Farmiga & Jonas Bloquet

“The Conjuring,” the main series of the ever-expanding “Conjure-verse” franchise, pits Ed and Lorraine Warren, two paranormal investigators, against unholy terror and satanic spirits aplenty – it’s part of the job description. With a demonic entity donning a habit introduced in “The Conjuring 2,” it was only a matter of time before the series spun-off into full Catholic Church territory. And so it is the case with Corin Hardy’s “The Nun,” which follows “miracle hunter” Father Burke (Demián Bichir) and young novitiate, Sister Irene (Taissa Farmiga) on a Vatican-ordered journey to a remote abbey in Romania, where the two are tasked with investigating the state of things in the Carta Monastery after news of a suicidal nun comes to light.

In somewhat of a return to the atmospheric qualities of “The Conjuring,” “The Nun” is shot in a steely gray and blue color palette and cinematographer Maxime Alexandre does a fine job of replicating the original’s dynamic first person pov camerawork. Unfortunately, little else about this spin-off resembles the wildly effective first installment. It’s a shame given Hardy’s potential, especially following his satisfying first feature, the supernatural horror film “The Hallow” (2015).

You would think that what is essentially a haunted castle set in 1950’s Romania would lend itself fabulously to the unsettling austerity of a gothic horror tale ala “Crimson Peak,” but in this case the almost over-saturation of tombs and desecrated altars and menacing black crevices galore feels a lot like going through one of those seasonal haunted houses at amusement parks. Add to this a lame, medieval era backstory to explain the cursed history of the abbey and “The Nun” leans into the realm of hokey monster movies. While there are some eery set pieces, and harrowing aerial shots of the impressive abbey (Romania’s real-life Corvin Castle), the technical and design elements are cheapened by an industrial-level assembly line of generic horror movie scare-tactics. There’s no build-up or sense of mounting tension that isn’t prematurely interrupted by a tired, by-the-book jump scare. Whatever creep factor the titular nun acquires in “The Conjuring 2” is quickly washed out as she makes her appearance too often and too early on in the film.

Guided by hunky local and tonally disruptive comic relief force, Frenchie (Jonas Bloquet), Irene and Burke venture out to the monastery grounds that people and animals alike avoid at all costs– its painfully obvious from the first moments the team arrives at a cross-encrusted stretch of creepy forest that the place is haunted. A particularly eventful overnight stay at the castle would seem enough to determine the state of things at Carta Monastery, but clearly, the duo’s sense of faith and duty are strong, as they stick around to carry out their mission with no qualms, deliberations, or even a clear-cut objective. We’re meant to assume this, of course, because Irene and Burke’s paper-thin characterizations do nothing to account for some inexplicable narrative details and flagrant plot holes.

Bechir and Farmiga do the best they can with what they’re given– especially Farmiga whose individual bits are the strongest parts of the movie, owing in part to her character’s symbolic (and aesthetic) juxtaposition to the dark color palette and crazed demonic nun-like apparitions that we encounter. We also learn Sister Irene has quite a powerful gift, not unlike her older sister, Vera Farmiga’s character in “The Conjuring” (though the two are unrelated in this instance). A sequel that elucidates Irene’s mysterious origins seems like a natural progression for “The Nun,” unfortunately this first effort won’t have many people caring what’s in store.