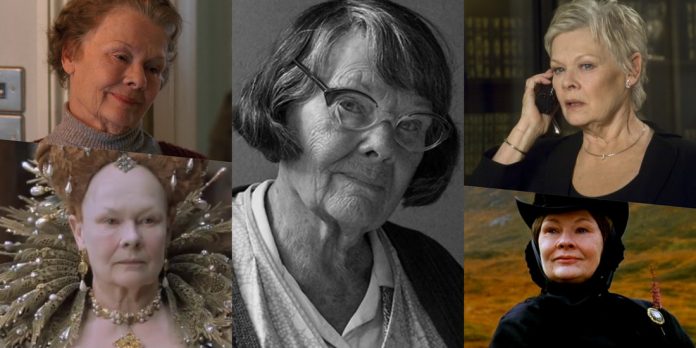 Dame Judi Dench is a figure so revered and beloved that it shouldn’t have been a surprise to anyone to hear her name called on February 8th as one of the Best Supporting Actress nominees for her work in Kenneth Branagh’s “Belfast.” Beginning her career like so many great dames and sirs, Dench started on the British stage at the prestigious Old Victoria theatre in London. Starring as classic characters such as “Ophelia,” “Juliet,” “Lady Macbeth,” and the West End’s first Sally Bowles, Dench acted sparingly on film until the late 1990s when she became the major name of British and Hollywood cinema that she remains today.​

Readers and film lovers may be surprised to learn that Dench only received her first Oscar nomination at the age of 63 in 1997 for her leading role as Queen Victoria in “Mrs. Brown.” In a year where four legendary British actresses were nominated in this category (Dench, Helena Bonham Carter, Julie Christie, and Kate Winslet), the award went to American Helen Hunt for her performance in “As Good as It Gets.” Many felt Dench should’ve won this year, but her make-up win was coming sooner than people expected.

The following year, she received praise for another regal role, this time as Queen Elizabeth I in John Madden’s Oscar-darling “Shakespeare in Love.” This was not the only portrayal of Elizabeth Tudor at the 71st Academy Awards ceremony, as Dench’s future co-star Cate Blanchett was nominated for the titular role in “Elizabeth” and lost to that year’s fellow co-star, Gwyneth Paltrow. Dench’s own award is notable given the brevity of her performance, clocking in at only eight minutes of screen time. Considering the goodwill she had built up the year before, the memorable impression her performance leaves in such a short period of time, and the then aggressive campaign tactics of Harvey Weinstein at Miramax, Dench secured her first, and to this day, only Oscar win.

Dench is tied for fifth alongside several other actors for receiving the most Oscar nominations, having garnered a total of eight in a quarter-century. Two years after her 1998 win, she was again recognized by the Academy for her supporting role in “Chocolat,” as well as the following year for her leading performance in “Iris.” Considering her proliferation in prestige, critically acclaimed films, casual Oscar fans are often baffled by the fact that Dench has only one Academy Award to her name, having not been decorated with a parade of golden statues comparable to the likes of Meryl Streep, Katherine Hepburn, or Frances McDormand. She has, however, received substantial recognition from other awards bodies, having won ten BAFTA Awards (four for television and six for film), seven Olivier Awards, a Tony, and two Screen Actors Guild Awards.

With two more respective Oscar nominations for her contrasting performances in the musical “Mrs. Henderson Presents” (2005) and dramatic “Notes on a Scandal” (2006), Dench’s status as one of Britain’s and the world’s most talented actresses was securely cemented by this point. At the same time, she had established a career beyond kitchen-sink dramas and biopics and delved into the blockbuster world with her performances as M in eight “James Bond” films from 1995-2012, throughout the tenures of Pierce Brosnan and Daniel Craig. Her final appearance in “Skyfall” garnered her substantial praise, with critic Roger Ebert declaring that the film “at last provides a role worthy of Judi Dench.” She would go on to receive BAFTA and SAG nominations for her swan-song performance in the film before handing off the M role to fellow Brit, Ralph Fiennes. Her very presence in the Craig franchise indicates an elevated sophistication, the likes of which the cinematic 007 franchise had never seen up until that moment.

While gaining international recognition for her Bond performances, Dench continued to confirm herself as a titan of British cinema, playing such quintessentially British roles as Queen Victoria (again) in “Victoria & Abdul” (2017) and Shakespeare’s wife Anne Hathaway (not to be confused with the Academy Award-winning actress) in “All Is True” (2018). Her recent performances have seen her cross the Irish Sea to the Emerald Isle. In 2013, she received her seventh Oscar nomination for her titular performance in the Best Picture-nominated “Philomena,” based on the true story of Philomena Lee, whose illegitimate child was taken by Catholic nuns and given up for adoption in America. Once again, Dench was up against fierce competition, this time losing to past “Notes On A Scandal” co-star Cate Blanchett for her tremendous role in “Blue Jasmine.”

Dench has been associated with Sir Kenneth Branagh since his 1989 directorial debut “Henry V,” in which Dench played Mistress Quickly, a fictional inn-keeper who appears throughout the Henriad. Branagh continued to cast Dench in supporting roles on stage and screen, as an elaborated version of Queen Hecuba of Troy in “Hamlet” (1996), Princess Natalia Dragomiroff in “Murder on the Orient Express” (2017), Anne Hathaway in the aforementioned “All Is True,” and Commander Julius Root in “Artemis Fowl.”

The essence of their relationship is perhaps best captured in “Belfast,” Branagh’s most recent directorial effort for which Dench has, somewhat surprisingly, been nominated for her latest Academy Award for Best Supporting Actress. I say surprisingly because many expected her co-star, the Critics Choice, Golden Globe, BAFTA, and SAG-nominated Caitriona Balfe to get nominated, but voters instead turned to Dench. Half-Irish herself, Dench plays what amounts to Branagh’s own grandmother. As Granny, she spends much of her screen-time spoiling her grandson Buddy (Jude Hill as Branagh’s stand-in) while offering sage advice to his parents tasked with difficult life decisions during the Troubles. No stranger to being a supporting player in a Best Picture contender, Dench’s performance has generally been overlooked by critics and audiences in favor of Caitríona Balfe (whose nomination, as mentioned before, seemed almost guaranteed) and Ciarán Hinds (who did secure a nomination for Best Supporting Actor). It is Dench, however, who gets the film’s final words, providing another emotionally impactful performance in a concise period of time as she encapsulates the internal conflict that resonates so strongly with immigrants bound so tightly to their homeland.

This year, all of Dench’s peers in the Best Supporting Actress category are first-time nominees, all of whom offered unique performances deserving of their nominations. Could this result in another Best Supporting Actress win for her? It’s doubtful that at the age of 87, Dench will lose sleep at night thinking about her chances of winning. Perhaps she’ll be the good-luck charm, though, that could lead to another Best Picture victory for “Belfast” just as she was for “Shakespeare In Love” in 1998 when it overthrew the Best Picture frontrunner, “Saving Private Ryan.” However, what her nomination does indicate, is a great appreciation by her acting and filmmaking peers, along with her ability to create memorable, stand-out performances with lengthy or short amounts of screentime. She has no intention of retiring, and we have no intention of ever doubting her again.

What are your thoughts on Dench’s Oscar nomination for “Belfast?” Which of her Oscar-nominated performances is your favorite? Let us know your thoughts in the comments section below or on our Twitter account.