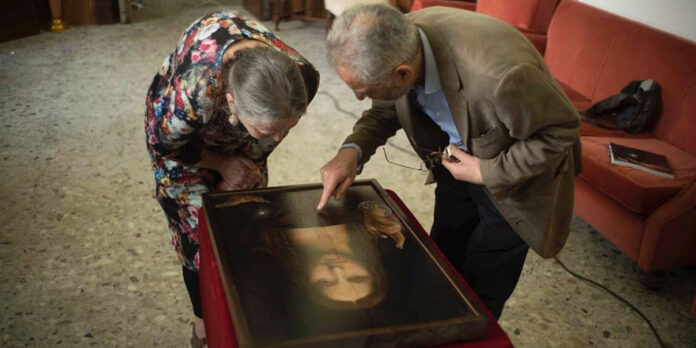 In 2005, a painting was bought at auction for less than $10,000. After years of painstaking restoration work, Christie’s announced in 2017 that they would be auctioning the painting, which they dubbed “The Last Leonardo”: The “Salvator Mundi,” a painting of Christ making the sign of the cross with his right hand and holding a crystal orb in his left, believed to be a long-lost painting by Leonardo da Vinci, one of less than ten that have been universally attributed to the master. For the first time in its history, the auction house worked with an outside agency to advertise the painting, with over 27,000 people turning out to view it as it toured Hong Kong, London, San Francisco, and New York. The painting sold for over $450 million at the auction, making it the most expensive painting ever sold at a public auction. The painting then disappeared, not seen by anyone since. How and why this painting could be lost for so long, sell for so much, and then become lost again is the story of Andreas Koefoed’s “The Lost Leonardo,” the most gripping, surprising documentary about art restoration you could possibly imagine.

Given the story’s real-life twists and turns (which will not be spoiled here and which you shouldn’t spoil for yourself by searching the web for info about the painting), Koefoed didn’t have to do much to make this such a thrilling yarn. But the director has a true salesman’s love of a good story, and the film has a palpable glee in leading the audience down the long and winding road of the painting’s history. The story begins at the beginning, with two of the men who bought the painting to have it restored.

Immediately, the audience is thrown into a world with which they will likely be unfamiliar, the world of fine art and art restoration. Thankfully, every subject in the film is well-spoken and seems to relish the opportunity to demystify the art world and their position in it. The notoriously insular art world is very much one of the film’s main characters – its atmosphere, its movers and shakers, and its very foundations are the nexus around which the film is built. The tangled web that emerges from that center ends up touching on international business, tax law, and global political structures on its journey around the world, going to places you would never have imagined at the film’s start.

In addition to the murderer’s row of art dealers and scholars who testify to the painting’s quality and history, Koefoed has marshaled lawyers, journalists, museum workers, and bankers from all corners of the globe to help unravel the story of this painting. Many have their reputations on the line, and half the film’s fun is in trying to figure out who to believe most. The one miscalculation the film makes is that Koefoed errs slightly too much on the side of those who think the painting is genuine, giving too little depth to the arguments of those who dispute the painting’s provenance (especially the abundantly salty art critic Jerry Saltz, who provides some of the film’s most entertaining commentary).

In the end, “The Lost Leonardo” isn’t about whether the painting is really by Leonardo, but rather what the possibility of that being true means to the world at large. As the film’s scope gets more expansive and Koefoed reveals more of the canvas he’s working with; it becomes clear that tracking the painting’s origin and restoration, as well as its attribution, is just one piece of the puzzle. By the time you realize that the film’s hook was only the tip of the iceberg, Koefoed has strapped you in tight, ready for the wild ride that the film’s second half is going to take you on. Come for the mystery of the “Salvator Mundi,” stay for the look at how the art world can affect the whole world’s balance of power.