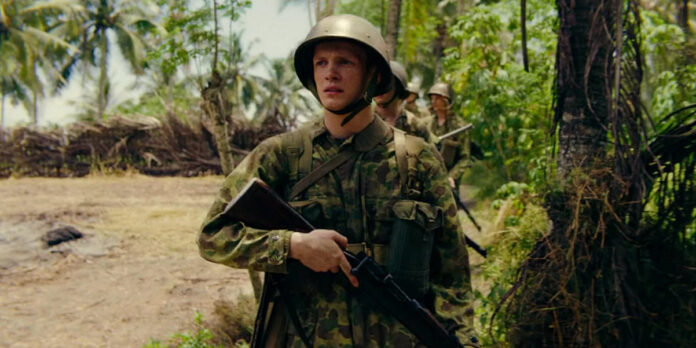 THE STORY – A soldier, deployed to suppress post-WWII rebellion in Indonesia, finds himself torn between duty and conscience when he joins an elite task force led by an increasingly ruthless commander.

​​​War movies often give us a chance to learn more about the history of our world and the tragedies and injustices that have befallen innocent people. “The East,” a Dutch film by Jim Taihuttu, gives us a glimpse into the Indonesian War of Independence, one that many likely didn’t learn about in school or even know existed. Through the eyes of a young soldier, who slowly resents what his particular unit is doing to the people of Indonesia, we see another example of colonialism, racism, and thirst for power in the world.

Johan de Vries (Martijn Lakemeier) joins the Dutch armed forces thinking it’ll be a simple task of keeping neighboring villages safe from rebel forces. Initially, he’s kind compared to his fellow troops, all childish and after local women, and tries to help the villagers and let them know they can trust him. He may also be trying to right the wrongs of his Nazi father, and he tries his best to make sure the other men in his unit don’t find out about that part of his family’s past. Johan later meets a mysterious captain, known only as “The Turk” (Marwan Kenzari), and begins to change. After one member of his unit is killed, Johan even becomes thirsty for vengeance against the rebels.

After Johan proves himself to be a loyal soldier, The Turk recruits him and many other soldiers to an elite unit, where troops wear green berets of their own, similar to the United States Army Special Forces. Soon, however, Johan sees the mysterious captain for who he really is and begins to question the unit’s entire operation to stop the rebels. Amid all the war action, we see another timeline: Johan returning to the Netherlands after his service, where he looks like he’s been haunted by his past.

Taihuttu doesn’t try to paint the Dutch as saviors, despite soldiers at the beginning of the film repeating they’re helping Indonesians. Instead, he shows an authentic, racist, and horrible history, and it’s not too hard to draw parallels to the Vietnam War. Dutchmen were sent to Indonesia to fight an invisible enemy, thinking they would-be heroes, but in the end, so much blood ended up on their hands. It’s hard to watch many moments in this film, and Taihuttu intentionally wants audiences to know and see just how damaging this war was to the people of Indonesia.

Even though the subject matter is new, the film might not seem that different from other war movies. It’s another “good guys doing bad things” kind of movie, rather than one focused on the conflict and why the Dutch were needed there. Focusing more on that would have enhanced the film and allowed audiences to really dive deep into the subject matter. There’s also an unnecessary romance with Johan and a rivalry with another soldier that doesn’t add much to the story overall. Again, it seemed like many of the same ideas from previous films were reused in this one instead of allowing this story to carve out its own identity for itself.

The pacing of the film also gets thrown off mainly when moments from Johan’s present are shown. The tension and suspense that fuels the war is wholly suspended when we go to the Netherlands — a place where there’s rarely anything equally exciting taking place, aside from the ending of the film. Those moments just needed better timing to make them work. Still, the cinematography in the two timelines is strong, with the lush green hues of the Indonesian setting significantly contrasted with the gray, bleak backdrop of the Netherlands.

There are several strong performances in “The East.” Lakemeier plays two characters especially — one from his past and one from his present — and they’re entirely different from each other. The fresh-faced soldier who had high hopes during the war looks totally defeated and haunted in the present. Lakemeier manages to command both versions quite well. Kenzari, though, steals the show as the mysterious Turk. He doesn’t let you know much about him early in the film, but he later makes you wish you never were introduced to him. The ease Kenzari shows as he’s inflicting pain on others is simply terrifying.

“The East” doesn’t do much different when telling the story of the Indonesian War of Independence, but it does bring a new subject matter to viewers’ attention that continues to show the painful side of war. The pacing is off at times, but solid performances from Lakemeier and Kenzari capture people’s attention. Perhaps this film inspires more war films, especially ones tackling lesser-known moments in history. Just as “The East” shows the injustices that took place in Indonesia, more stories deserve to be told.