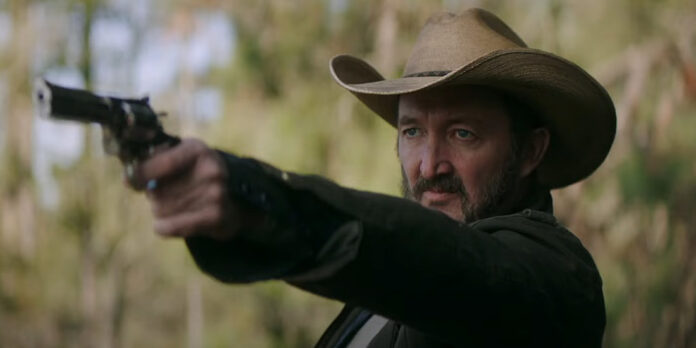 THE STORY – A local sheriff pursues a group of modern-day outlaws after they commit a horrific crime in a desolate Southwest town. When a professor and her husband cross paths with the criminals, everyone gets drawn into a spiral of violence and retribution where morality becomes ambiguous and survival is the only option.
​
THE CAST – Ali Larter, Ralph Ineson, Tahmoh Penikett, Ron Perlman, Kyle Schmid, Dakota Daulby, Camille Legg & Tom Stevens

A nihilistic western set in the modern-day with gravelly voiceovers pontificating on the meaning of life about the consequences of innocent lives getting caught up in a crime gone awry. I’m not talking about “No Country for Old Men.” I’m referring to the “The Last Victim,” which lurches along its way to the finish line, trying so hard to be Joel/Ethan Coen and Cormac McCarthy without understanding what made that masterpiece of a film work as well as it did.

You’ve got “The Witch’s” Ralph Ineson employing his admittedly very cool sounding voice to spew vague platitudes about fate and the changing nature of life both through narration and onscreen. The problem is they’re just that. Platitudes. Late-night college bull sessions. “No Country For Old Men” was trying to say something very specific about clinging to meaning and morals in a dark modern world. Ineson’s narration here sounds as though it is scripted in terms of “you know what would sound cool?” without going any deeper than that. As for the story, a crime has indeed gone awry, resulting in multiple murders. And you’ve got the innocent bystander caught up in the aftermath of the murder (Ali Larter) and thrust into a cat and mouse game with a world-weary sheriff (Ron Perlman) trying to figure out what’s going on.

What’s presented here is all very familiar, but none of it works as well as you’ve seen in the past. Credit should be given where credit is due, though. Like “No Country for Old Men,” this is a gorgeous-looking film. It may not be Roger Deakins for sure, but cinematographer Lukasz Pruchnik has run with a presumably smaller budget and created striking images with some dynamic camera work to compliment the film’s harsh narrative. He and director Naveen A. Chathapuram stage some individually tense scenes. In particular, the opening murder is well executed. The problem is that the plotting is generally thin. And for what is attempting to be a tight cat-and-mouse chase film, the majority of the film simply isn’t as tense as it wants you to believe. The screenplay’s moments of unintentional comedy doesn’t help things as the film struggles to find a consistent tone throughout. Neither does a distracting, over-the-top soundtrack. Think of it as the Western equivalent of “Con Air” LeeAnn Rhimes needle drops. The sound design is, for lack of a better word, interesting. It’s impressive but calls attention to itself too often, often to the story’s detriment. Sometimes it’s exceptional work, but the best sound shouldn’t leave one noticing it consistently. And there’s some noticeably clunky ADR work to boot.

Ali Larter does her very best charting a character’s descent from an almost comically upbeat introduction to a stone-cold killer, while Ineson and Perlman are always reliable. However, the script takes Perlman’s character to an unsatisfying and absurd third-act conclusion which further dampens the film’s overall impact.

In short, “The Last Victim” is a film that is very much not as smart or as thrilling as it thinks it is. It owes a lot to films such as “No Country for Old Men” and “Hell Or High Water,” but only in the most basic sense, while doing very little to distinguish itself. It suggests director Chathapuram and cinematographer Pruchnik have a future if they can get better writing to work with. And its cast is sturdy and reliable enough to make it at least watchable. It won’t ruin anyone’s career, but this is just one of many of the neo-noir westerns in the past two decades that will be instantly forgotten.