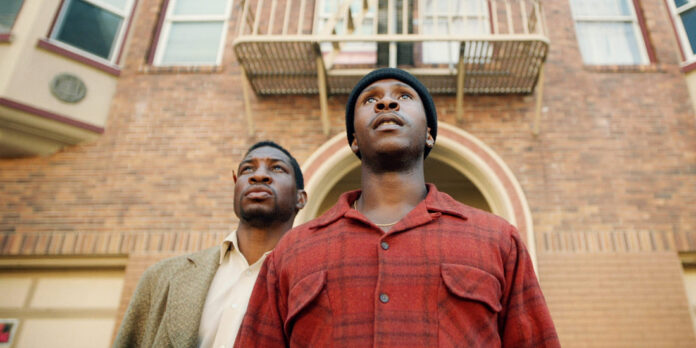 THE STORY – Jimmie and his best friend Mont try to reclaim the house built by Jimmie’s grandfather, launching them on a poignant odyssey that connects them to their past, even as it tests their friendship and sense of belonging in the place they call home.
​
THE CAST – Jimmie Fails, Jonathan Majors, Danny Glover, Tichina Arnold, Rob Morgan, Mike Epps, Finn Wittrock & Thora Birch

Writer/director Joe Talbot has officially announced himself as a loud and exciting new voice in the world of feature filmmaking. Co-written by Rob Richert and based on equally stunning new leading star Jimmie Fail’s own life, Talbot’s exploration of home, identity and gentrification is a gorgeous, vibrant and awe-inspiring feature film debut that will cause many to turn their heads and take notice of the film’s creator, stars and crew members, all of whom bring something original to the table to make “The Last Black Man In San Francisco” stand out amongst the other independent films you will see in 2019.

Jimmie Fails (Played by newcomer Jimmie Fails) is a homeless black man living in modern-day San Francisco with his best friend Montgomery Allen (Jonathan Majors) at Montgomery’s blind father’s home (Played by Danny Glover) in a garage. Coasting through life and looking for an escape, Jimmie finally finds a solution when the house his grandfather built with his own hands (he famously called himself the first black man in San Francisco) goes up on the market due to a dispute between the owner and her sister. As the unofficial caretaker of the house (he routinely performs maintenance on it despite the owner’s insistence that he should not), he decides to move in with his own belongings, even though he has not put down any money on the home to officially claim it as his own. As Jimmie and Montgomery settle in and attempt to make a new life for themselves in the large and expensive house, away from poverty and their current lives, Jimmie’s delusion that the house belongs to him by right begins to get the better of him.

I cannot overstate how stunningly beautiful this film is. Every shot, every frame, every gorgeously composed piece of music by Emile Mosseri (Go download this right now). “The Last Black Man In San Francisco” has a lyrical power that cannot be overcome. It’s simply undeniable. Talbot’s use of slow-motion, deep focus framing, sun-drenched and vibrant cinematography (Provided by Adam Newport-Berra) will make your jaw drop multiple times throughout. His storytelling is both classical and contemporary, as it invites us into modern day San Francisco, asking us to be moved by its historical landmarks, mundane trappings, rich history and diverse lifestyles inhabited by its various tight communities. For a film that focuses so intently on the theme of home and what it means to us, Talbot captures the physical essence of it with his setting so gracefully. He matches that quality with his portrayal of home not just through the setting but also through the people we interact and live with on a daily basis.

Jimmie Fails and Jonathan Majors have such a lived in and deep established human connection as friends who are as close as brothers. Their relationship is one of the best on-screen portrayals of friendship I have ever seen and it’s not driven as much through their dialogue or the story but how deeply they embody their characters through their performances. There’s so much depth, preceding character building, and humanity that shines through every glance, line-reading, and action that you cannot help but be moved by Jimmie’s plight to feel like he belongs and Montgomery’s desire to protect his friend from not only the world but from his own delusions.

Where “The Last Black Man In San Francisco” may lose some people is with its screenplay. As stated above, the dialogue and story are not necessarily the strongest. Joe Talbot does not hold our hand and walk us through his story beat for beat as we expect it to play out. Dialogue meanders and feels broken up at times through the film’s pacing. By the time we get to an “art imitating life” theatrical play in the third act directed by Montgomery where he even admits “it doesn’t really have a plot yet,” we start to feel the film’s runtime and begin to wonder if Talbot will be able to pull this entire thing together by the end. However, “The Last Black Man In San Francisco” is less a film you watch in a more traditional sense and is instead one you observe, feel and think about long after the credits have rolled.

Joe Talbot and his collaborators are more concerned with theme, atmosphere, and emotion rather than telling a straightforward story for the masses. It’s this lyrical quality that makes “The Last Black Man In San Francisco” a staggering work of art, with many takeaways and levels of interpretation. Jimmie may have come from the streets but his life is not determined by only one thing, as he longs for a better life for himself. “The Last Black Man In San Francisco” is not just one thing, as it wants to be something more. It’s about home, friendship, family, our history, our present, our future, our lies, our truths, our hopes, our dreams…our lives. It’s a film which I’ll continue to re-visit time and time again because for me, cinema is my home and Joe Talbot has crafted a piece of cinema that I forever want to live in, in its purest and most artistic form.