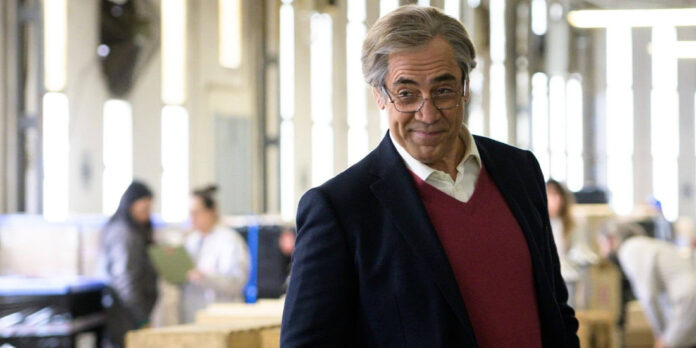 THE STORY – Awaiting a visit by a committee that could give his company an award for excellence, the owner of an industrial scales manufacturing business tries to resolve any problems from his workers.

There are many hallmarks to an enticing drama that can keep one invested in the characters’ plight. It can be grand spectacles that emphasize a scale in scope and storytelling or the more intimate approach that hones in on the minutiae of a character study, examining the more human conflicts that arise through daily interactions that inform more of an emotional state. Either strategy can be effective, but something about the latter can give way to fascinating stories that connect on a more poignant level. “The Good Boss” is a film that aims for this objective. While the execution is not always the most alluring, it still exhibits a captivating narrative grounded by a compelling central performance.

The film centers around a chaotic week for Blanco (Javier Bardem), the CEO at a well-respected Spanish factory known for manufacturing industrial scales. There’s quite a bit on Blanco’s plate as he desperately organizes his business for the upcoming inspection, where he could be the recipient of a prestigious award. However, he finds obstacles at every turn. The company’s downsizing has resulted in one employee, Jose (Óscar de la Fuente), protesting right outside the grounds, which causes a disruption; Blanco’s employee and longtime friend Miralles (Manolo Solo) is facing domestic troubles which causes negligent job performance; Blanco has begun an extramarital affair with the new intern Liliana (Almudena Amor) that soon reveals its own complications. It’s a complex set of incidents Blanco must navigate to put out multiple fires at once and ensure this tiny sliver of his legacy remains intact.

For an actor who is as prolific as Bardem is these days, there doesn’t seem to be too many opportunities to demonstrate his broader abilities. His persona has become attached to devilish roles such as “No Country for Old Men” and “Skyfall,” but there haven’t been many instances to present a quieter, naturalistic side. He is afforded such a chance here, and it’s quite captivating to see him carry this grounded screen presence. Few histrionics are displayed here as Bardem embodies a heavier demeanor, one that feels suppressed by the mounting pressures of his environment yet still portrays an affable charm that is subtlety effective. He also taps into a sly cunningness that maneuvers through the delicate prism of obstructions. It’s pretty commendable how Bardem can achieve a performance that is engaging despite never veering off into bombastic territory. It’s proof of his wider range, as he finds the humor and devastation in an ordinary man faced with a difficult set of circumstances.

As one could imagine, not too many other cast members make quite as much of an impression as its leading protagonist – though there are still some endearing turns. Solo captures manic energy that can occasionally slip into a broad caricature. Still, he plays as an interesting foil to the character of Blanco, acting as a sort of manifestation of the more frantic degradation boiling underneath his hardened exterior. Amor’s playful energy showcases a nice tension with Bardem, though an underwritten character stunts her impact. The ensemble is sprinkled with other fine additions, such as de la Fuente as the protesting employee and Fernando Albizu as a genial security guard. Yet all are merely background for Bardem, which is understandable.

When it comes to the efforts of writer-director Fernando León de Aranoa, the results are much more middling. This isn’t to say his filmmaking abilities are at all wholly incompetent, merely mundane in the delivery. As only serviceable, there isn’t much to the craft that warrants any notice but would be commendable enough in assistance for this material. Still, the direction is unremarkable and is used only for the illustration of this story, which has some impressive weaving and maneuvering through the intricate plate-spinning that teeters on a razor’s edge. While it can be blunt at times, with hit-or-miss comedic bits and diverging subplots that are not particularly of note, the examination of moral ambiguity that elicits a complicated feeling of encouragement is a fascinating exploration. The tone may not be groundbreaking, but witnessing the cracks in a steely façade slowly give way to a bubbling tension is appealing to watch.

Some may remember during the most recent Cannes Film Festival that several films seemed to be garnering comparisons to “Uncut Gems” and the stressful plight of Adam Sandler’s protagonist, and it’s interesting that “The Good Boss” seems to be yet another film this year that could fit this description. Its portrait of a manic series of events that lead to a disastrous escalation of a conflict that must be tactfully steered through is the foundation of this film’s story, and its achievements are not always wholly successful. The screenplay has a solid foundation that is not always served by bland filmmaking. Yet, elements of its structure are amusing, and the central performance from Bardem does express some deeper layers to his talents as an actor. This study of small-scale drama may not be the most innovative, but it produces an inviting aura worthy of discovery.