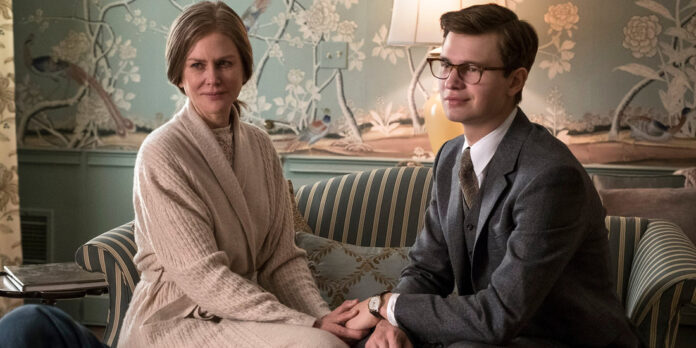 THE STORY – Theodore Decker was 13 years old when his mother was killed in a bombing at the Metropolitan Museum of Art in New York. The tragedy changes the course of his life, sending him on a stirring odyssey of grief and guilt, reinvention and redemption, and even love. Through it all, he holds on to one tangible piece of hope from that terrible day — a painting of a tiny bird chained to its perch.
​
THE CAST – Ansel Elgort, Oakes Fegley, Aneurin Barnard, Finn Wolfhard, Sarah Paulson, Luke Wilson, Jeffrey Wright & Nicole Kidman
​
THE TEAM – Gabriela Cowperthwaite (Director) & Brad Ingelsby (Writer)

​​​​​Adapting a novel to the screen is a tricky business. Adapting a novel as dense as Donna Tartt’s Pulitzer Prize-winner “The Goldfinch” is even trickier. The story of a young man who loses his mother in a tragic accident and finds a place in the insular, upper-class world of art and antique dealing as he grows up is a lot of novel to cut down to a digestible size. Even at two and a half hours, John Crowley’s film version of “The Goldfinch” feels compressed, sacrificing plot development for the sake of character development to the point where it becomes completely unbelievable.

Unfortunately, this is not one of those long films that just flies by. “The Goldfinch” feels every one of its 149 minutes. It takes its time wallowing in the grief of its main character, as he goes from New York to Las Vegas and back, then to Amsterdam and back again. And since the film is shot by the legendary, Oscar-winning Roger Deakins, there’s certainly plenty of pretty to look at. Nearly every shot in “The Goldfinch” is lovely enough to frame and hang on a wall, which is appropriate for a film that is very much concerned with art and the idea of it living forever. Composer Trevor Gureckis works overtime to complement Deakins’s gorgeous images with a gorgeous score, and the two in tandem do more to push the film’s emotional moments than anything else in the film.

Not that the performances are terrible. Ansel Elgort and Oakes Fegley ably carry the film as the older and younger versions of the protagonist Theo, although neither is great. Nicole Kidman manages to be both remote and warm as the mother who takes in this young damaged boy and slowly comes to care for him as her own. Luke Wilson curdles his natural charm to play Theo’s deadbeat dad, and Sarah Paulson is a hoot as his trashy girlfriend. And Jeffrey Wright tears into the role of the antique store owner who becomes a surrogate father to Theo with his usual weary strength and passion. They’re all good. Even the child actors are good at sneaking in some humor into the airless affair (Finn Wolfhard’s slightly overcooked Russian accent notwithstanding).

But what it all boils down to is the screenplay, and for whatever reason, Peter Straughan is simply not up to the task at hand. The lyricism of Tartt’s novel is mostly gone, and most of what survives is relegated to a voiceover that Elgort can’t deliver impactfully. The last act comes out of nowhere, taking a sudden left turn from which the film can’t recover. There are a few scenes here and there that do work, though, and what impact the film has can be traced back to these moments, where Straughan manages to connect people dealing with different stages of grief and depression and draw parallels between them. But Tartt’s novel is about so much more than that, and those other threads never come together in a satisfying or meaningful way.

It’s unfortunate because there’s a lot of talent on display in “The Goldfinch.” Give it some more breathing room by turning it into a miniseries, and hire a stronger writer, and this could have been a worthy adaptation. But as it stands, “The Goldfinch” is that most disappointing of literary Oscar season film festival debuts: “The Almost, But Not Quite.”