The Divide Between Critics & Audiences This Awards Season 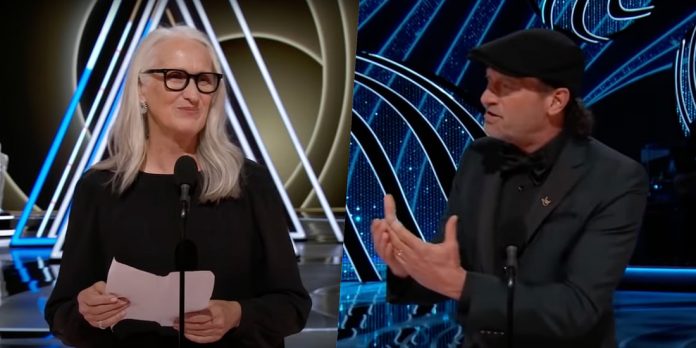 ​No matter how one values or doesn’t value the critics’ section of awards season, their results were pretty clear this year. Their overwhelming choices included “The Power of the Dog” for Best Picture, Jane Campion for Best Director, Benedict Cumberbatch for Best Actor, Kristen Stewart for Best Actress, Kodi Smit-McPhee for Best Supporting Actor, Ariana DeBose for Best Supporting Actress, “Licorice Pizza” for Best Original Screenplay and “The Power of the Dog” again for Best Adapted Screenplay. But on Oscar night, every single one of those critical winners except for Campion and DeBose lost in the biggest divide we’ve seen between Academy voters and critics of this era.

Someday the 2021/22 Oscars and awards season will be remembered for more than just one particular winner, even if that day won’t come anytime soon. But on the off chance we ever talk about anything else from this season again, it may be worth noting how Oscar voters and critics/Film Twitter were as far apart as they’ve ever been this past year, at least when it came to major wins. When the likes of “Green Book” and “The King’s Speech” won Best Picture, and when critical sweepers like Ethan Hawke and Lupita Nyong’o weren’t even nominated, it was easy to point out how the Oscars and critics were on increasingly different pages. But even in those years, the results on Oscar night and over months of regional and non-industry awards matched up far better than they did this year.

In the eight major categories, the Academy and critics only agreed on two top choices in 2021. 2020 was a far different matter, as they agreed on “Nomadland’s” Best Picture win, Chloe Zhao’s Best Director win, the acting victories of Daniel Kaluuya and Youn Yuh-jung, and “Promising Young Woman’s” Best Original Screenplay victory. Critics didn’t see the two late wins for “The Father’s” Adapted Screenplay and for Anthony Hopkins coming, much like most everyone else didn’t, and were literally split between Carey Mulligan and eventual Best Actress winner Frances McDormand. But otherwise, both the industry and critics were on the same page more often than not.

This was the case in 2019 too, although the Academy ignored all of Nyong’o’s critical Best Actress wins for “Us” and didn’t even nominate her. Otherwise, they fell into line honoring “Parasite” for Best Picture and Best Original Screenplay and also agreed with critics about Bong Joon-ho, Brad Pitt, and Laura Dern. If it were up to those critics, the Academy would have also chosen Adam Driver over Joaquin Phoenix in Best Actor and “Little Women” over “Jojo Rabbit” for Best Adapted Screenplay, yet it was not to be.

In that most infamous year of 2018, Oscar voters went out of their way to defy critics and pick “Green Book” for Best Picture and Best Original Screenplay, Rami Malek over the snubbed Ethan Hawke for Best Actor, and Mahershala Ali over Richard E. Grant in Best Supporting Actor. Yet even then, they still sided with critics in giving Olivia Colman Best Actress, Alfonso Cuaron Best Director, Regina King Best Supporting Actress, and “BlackKklansman” Best Adapted Screenplay. In that incredibly divisive year, the Oscars and critics still matched up twice as much in the major categories as they did in 2021.

The only time Academy voters and non-industry voters disagreed as much as they did in 2021 was actually in 2014. In that year, the Oscars famously snubbed critical sweepers “Boyhood” and Richard Linklater for “Birdman” and Alejandro Gonzalez Inarritu in Best Picture and Best Director. They were one of the few groups to choose Eddie Redmayne over Michael Keaton for Best Actor, broke a near season-long tie between Julianne Moore and Rosamund Pike in Best Actress for Moore in an industry sweep, and gave “Birdman” and “The Imitation Game” screenplay awards instead of critical champions “The Grand Budapest Hotel” and “Gone Girl.” Aside from season-long supporting sweepers J.K. Simmons and Patricia Arquette, Oscar voters and critical voters agreed on pretty much nothing in 2014 in ways that wouldn’t repeat for another seven years.

Yet, for all the great and small differences between these two very different voting bodies, such years are rare in the preferential ballot era. Despite some very major disagreements in some instances, the Academy and the critics have usually agreed at least half of the time on winners in the major categories. In fact, they were almost perfectly matched in 2013 when Chiwetel Ejiofor was the only critical favorite in the eight above-the-line fields to lose on Oscar night – only for that brief harmony to fall apart the following year. Maybe a year like 2021 is an exception rather than the coming norm in that context. It already was before the Oscars, considering how one movie dominated the critic’s circuit like none in this era. Whether it was because critics loved “The Power of the Dog” that much or because there were very few “artsy” alternatives considered for wins this awards season, critics and non-industry voters pretty much put all their eggs in one basket in ways they didn’t even do for “The Social Network,” “Moonlight,” “Roma,” “Parasite,” or “Nomadland.”

“The Power of the Dog” set a record in “winning” five of the eight major categories in critic awards season, including Best Picture, Best Director, Best Actor, Best Supporting Actor, and Best Adapted Screenplay. Only “12 Years a Slave” was that dominant in one season during the preferential ballot era, as it won the most critic awards in Best Picture, Best Actor, Best Supporting Actress, and Best Adapted Screenplay. Yet it also won three of those four categories on Oscar night, while “The Power of the Dog” only won one of the five categories it had swept for months.

Of course, the story of awards season when it comes to the actual movies is how “CODA” defied these stats and mostly every other in existence. With its only critical Best Picture awards coming from the Nevada Film Critics Society, the Chicago Independent Film Critics Circle, the Satellite Awards, and the Hollywood Critics Association, and its only screenplay awards coming from the Utah Film Critics Association, the Hawaii Film Critics Society and the Hollywood Critics Association before it won BAFTA and the WGA, “CODA” was the least critically honored Best Picture winner since “The King’s Speech” overtook “The Social Network” in 2010. Nonetheless, Troy Kotsur was at least the second biggest critical winner in Best Supporting Actor behind Smit-McPhee, before he swept the late industry awards.

If “The Power of the Dog” was a once in an era critical sweeper, “CODA” was a once-in-a-generation Oscar underdog sweeper, at least in the three categories it was nominated for. But the divide between critics and the Academy wasn’t just reflected in those categories. Cumberbatch kept racking up Best Actor critic wins, although Will Smith was heralded as the eventual Oscar winner since Telluride – regardless of everything else those pundits didn’t see coming. And unlike in 2018, a critical Best Actress champion for playing a British royal figure didn’t hold off an overdue late favorite at the end, as Stewart’s numerous regional wins for “Spencer” only barely got her in the Oscars field before Jessica Chastain conquered it. Meanwhile, “Licorice Pizza” was the majority choice among critics for Best Original Screenplay, but not by a wide enough margin over eventual Oscar winner “Belfast” – and certainly not by the wide margin “The Power of the Dog’s” adapted screenplay had over “CODA” and every other contender before its loss.

One of the outrages on Oscar night was the telecast’s apparent disrespect for artsy movies, with notable jokes at the expense of “The Power of the Dog” and “The Last Duel.” Critics did seem to have an influence on voters during the nomination process when they helped push “Drive My Car” into several major categories, and “The Power of the Dog” became the most nominated film of the year. But when it came time to award such movies any Oscars, almost none of them won anything while the more populist movies swept. So in that regard, the show’s apparent disdain for more critically favored movies only reflected the will of voters at the very end. The proof is in the results of Oscar night and critic awards season, as they have never been further apart in this era than they became in 2021. But between “The Power of the Dog” and its debatable strength as a frontrunner, “CODA” breaking every rule for Oscar wins since the 1930s, the inability of other critical favorites to win major awards despite getting big nominations, and the other unique circumstances that favored lighter fare this season, it is still easy to hold out hope this is only an outlier.

Next season, there probably won’t be one singularly dominant film among critics, and there likely won’t be another late phenomenon like “CODA” either. Maybe then critics and Academy voters can agree on both nominating critical darlings and giving them Oscars as well, even if they do agree only a little more than half the time instead of a quarter of the time. But if they disagree at the same rate on Oscar night 2023 as in 2022, for whatever reason, then there really will be something to start talking about.

​What did you think of “CODA’s” Best Picture victory? Do you think we’re living in a time where the divide between critics and audiences is greater than ever before? How do you feel about it and which side do you lean on? Please let us know your thoughts in the comments section below or on our Twitter account.