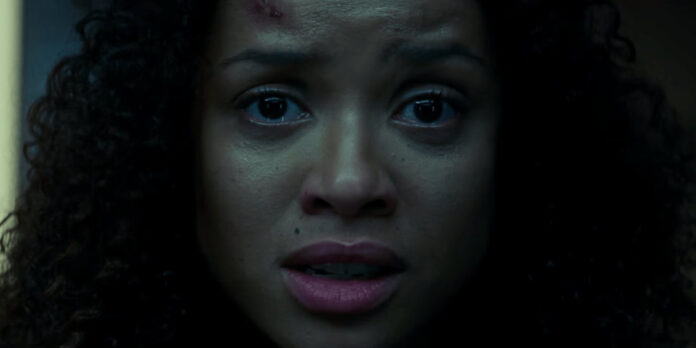 THE STORY – Orbiting a planet on the brink of war, scientists test a device to solve an energy crisis, and end up face-to-face with a dark alternate reality.

​Approximately six hours before writing this review, I had no idea when the mysterious new “Cloverfield” movie would be seen. Continuing the new tradition of brilliant marketing campaigns for this series, Netflix decided to drop a teaser trailer for “The Cloverfield Paradox” in Super Bowl LII, mere hours before releasing the film to the public. It was a genius marketing strategy, but ultimately has no effect on the quality of the film. In the end, the film is never as surprising and exciting as their marketing tactics.

Directed by Julius Onah, “The Cloverfield Paradox” follows a group of astronauts aboard a space station, the Cloverfield, as they attempt to solve some sort of energy crisis that is afflicting Earth. We’re never given much more information on what that crisis is exactly, but this station will attempt to use a particle accelerator to solve it.

The crew tasked with saving Earth: Ava Hamilton (Gugu Mbatha-Raw), Kiel (David Oyelowo), Schmidt (Daniel Brühl), Mundy (Chris O’Dowd), Monk (John Ortiz), Tam (Ziyi Zhang), and Volkov (Aksel Hennie). We get bits and pieces of Hamilton’s backstory, but nothing about any of the other characters. They’re all very distinct characters, and played well all around, but it’s a little tough to connect with characters you know nothing about. Still, we’re here to see them get this accelerator up and running to save humanity. Of course, it’s not that easy, since it doesn’t actually work.

In a really great opening title sequence, we see glimpses of the crew’s failed attempts to get the device working. A gripping score from Bear McCreary brings us through the titles as time passes on the ship. Eventually, somewhere around two years after they started their mission, the accelerator comes to life. The downside? They made the Earth disappear.

This is the type of thing that makes this movie exciting. There are plenty of these WTF moments that reel you in. The EARTH just went ahead and DISAPPEARED. The crew realizes that their device must have messed with the space-time continuum and sent them to another dimension. In doing so, it also made a bunch of strange stuff start to happen on the ship. The walls move and shift, the ship malfunctions unpredictably, and things start to disappear and reappear in places (Or…people) they don’t belong. The majority of these moments are really gripping and well executed. Some of the imagery, like an arm crawling on the ground, is pretty cool. The problem is that they don’t always move the plot anywhere.

We’ve had decades of space station movies, so we know all the tropes by now. Unfortunately, “The Cloverfield Paradox” checks them all off. The sad video chat with the loved one back home, the crew members being picked off one-by-one, the hero who locks himself away to be a sacrificial hero; we’ve seen these all done to death. It’s absolutely nothing new. The most surprising thing about this film is that it doesn’t even attempt to subvert the genre or avoid cliches.

When the film isn’t going back and forth between interesting space-time glitches and boring cliches, we get brief pictures of what’s happening with Hamilton’s husband back on earth. It’s painfully obvious that these are the “Cloverfield” additions to the movie. These scenes don’t connect to what’s happening on the station in the slightest. There is no connective tissue, and nothing to make you care what her husband is doing. In fact, I can’t even tell you what was happening in his scenes, because I didn’t understand it. It never felt organic. It’s all an afterthought.

Though there is plenty of creativity here, the film doesn’t keep the audience updated on what’s actually happening, mistaking confusion for intrigue. There were far too many times that I genuinely didn’t know what was going on. It seemed as though any time there was a narrative lull, it was just time to kill off another crew member. We’ve seen this process time after time after time, so it’s hard to care when everyone starts dying off. It’s so predictable.

There was so much potential in this movie. It’s tough to see some of the creativity go to waste here, along with this strong cast. Unfortunately, old tropes, unnecessary “Cloverfield” fluff, and poor plotting are all hard to overlook. While the first two installments in the “Cloverfield” series brought something unique and interesting to the table, “The Cloverfield Paradox” feels more like a low-tier “Black Mirror” episode.