The Case For “Destroyer” 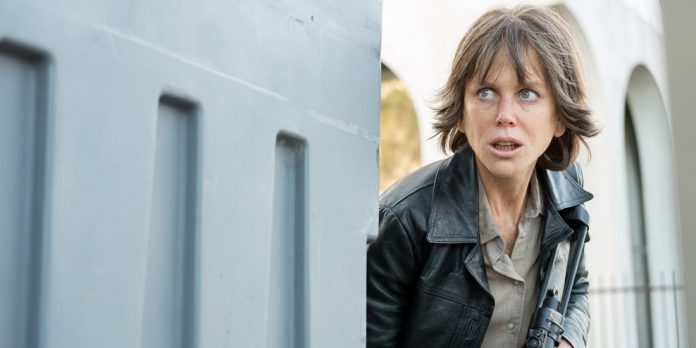 ​Nicole Kidman. Woman director. Rule-bending gender roles. Film noir. Physical transformation. These are some of the terms that have built the profile of Karyn Kusama’s “Destroyer” on the national stage over the past few months. The buzz for Kidman’s performance commenced as soon as the first reactions dropped out of the elite Telluride Film Festival in September. While Kidman’s characterization of the protagonist has been universally praised, the film itself has divided viewers and critics in every which way. For instance, the New York Times and the Los Angeles Times — two of the largest national newspapers in the country — split in the way they interpreted the film: Manohla Dargis (NYT) wrote one of the most positive reviews the movie received and Justin Chang (LAT) one of the most negative. After seeing the film, I can report that the movie lives up to that distinction. “Destroyer” is the most interesting motion picture of the year, one that deserves to be analyzed, debated, and discussed.

​Kidman’s Golden Globe nomination for Best Actress is the only major awards traction the project has accomplished thus far. Sadly, the film deserves much more attention than it is receiving. “Destroyer” will stand the test of time and will gain a reputation as people revisit it over the next decade. As Oscar nomination voting gets underway, I implore you to consider “Destroyer.” Kusama crafted a piece of filmmaking that left a deep, visceral impact with me. I haven’t experienced that kind of reaction in a long while from watching a movie. The film’s statement lingered with me for days after seeing it. “Destroyer” will shoot you down. Bang. Bang.

“Destroyer” is an existential study of guilt and the human condition. The film depicts the way guilt can eat away at a person and how someone can let it infect their past and destroy their future. The brilliant screenplay creates maximum impact using a tricky structure for the arc of the film. In addition, the way the audience views Erin Bell morally begins more heroically than it ends, adding to the overall complicated effect of the story. A choice Erin is revealed to have made in her past, one based on weakness and circumstance retroactively alters the way we judge her as a character and her journey overall. The film ultimately focuses on the consequences of Erin’s decisions, and how they have led to the deterioration of her as an individual and mother. Erin’s arc is redemptive to an extent, but also one of acceptance of responsibility and a declaration of agency.

Screenwriters Phil Hay and Matt Manfredi have taken a lot of heat for creating the film’s most popularly cited flaw: the writing being messy. However, I respectfully dissent; those critics should give the screenplay more of a deserved reflection. If it were up to me, “Destroyer” would receive a Best Original Screenplay nomination at the Academy Awards. In addition to the structure and themes discussed above, Hay and Manfredi bring to life the most fascinating film character of 2018 in Erin Bell, bar none. While the audience is not directly given a detailed synopsis about Erin’s life outside the two periods of time in which the plot takes place, the writers delicately provide hints about who she was as a child, who she was as a mother in between the two timelines, and how she evolved over the course of her life. The subtle and smart depiction of Erin makes a full picture of a human being. The script for “Destroyer” is an intricate character study and investigation of themes disguised as a stylized film noir and crime story.

At its core though, Kidman’s central performance is the main event of “Destroyer.” I’ve always considered Kidman to be an actress who excels at the inner workings of character, as opposed to someone like Cate Blanchett whose talents are best severed in theatrical roles. Therefore, it was to my surprise that Kidman’s performance as Erin Bell was as physically conceived as it was emotionally. She portrays the damaged LAPD officer from the inside out, and there’s not a single moment in the script she doesn’t make work. Of course, every critic’s canned line about Kidman’s performance is “it’s unlike anything she’s ever done.” That’s entirely accurate, but not for the makeup, guns, and violence – no. Rather, it’s the way she balances the physicality of a performance like Joaquin Phoenix in “The Master,” while commanding consistent confidence of naturally embodying a pulpy character, as we’ve seen from Kate Winslet in “The Reader.” Believe it or not, a lot of Kidman’s sensational performance, achieved through character acting, is lived in and organic. My favorite scene of Kidman’s acting is a conversation Erin has with her daughter in a restaurant in act three. It’s such a defining moment for the character, and Kidman’s performance in that scene specifically is perfect, delivered with a similar composition and skill as her very own train station scene from her Oscar-winning “The Hours.”

The other indisputable highlight of the movie is the film score. “Destroyer” has the most underrated original musical composition of the year. The Emmy-nominated composer Theodore Shapiro (“Game Change”) underlines the film with a haunting, cathartic score which blends the darker noir aspects of the central plot and the emotional journey of the protagonist. Shapiro’s work is worthy to stand next to Nicholas Britell’s in “If Beale Street Could Talk” and Justin Hurwitz in “First Man” this year at the various award shows, but for some reason, it’s not being recognized. You won’t hear another movie like “Destroyer” in 2018, which adds further novelty to a film that’s already freshly executing a classic setup.

In fact, everything in “Destroyer” is of its own distinct artistic choice, and that is thanks to the directing by Kusama. Her firm hand is what keeps the third act twists, payoffs, and flashback/circular structure intact. She has an eye for framing and focus while capturing the suspense and emotion appropriately. Kusama and cinematographer, Julie Kirkwood, work on the same wavelength to stage remarkable camerawork that’s both unique and aesthetically striking mis en scene. She furthers her directorial stamp with the help of film editor, Plummy Tucker, who proficiently sews together the two timelines, builds several potent montages, and tightly constructs a few adrenaline-inducing action sequences. The united perspective of three women in the holy trinity backbone of the filmmaking process proves to be cinematic magic. What other 2018 film can say it has a female director, editor, and cinematographer working together to uniquely tell a feminist story? No major release or awards season vehicle by my count.

Part of why “Destroyer” is being received mildly as opposed to emphatically is because it will challenge you — it’s a hard film in which to invest and want to love. However, time will favor its success. A few years down the line, people will revisit the film and rescind their initially resistant reactions. Because of the tangled structure of the screenplay, I imagine going into the film on a rewatch and knowing what to expect will provide a smoother ride to absorb the craft of the production and the incisive, heavy themes. As I said earlier, “Destroyer” is the most interesting film of the year. The script and score are outstanding, Kidman memorializes a one-of-a-kind portrayal, and its all-female team’s vision is exquisite. Consider it.

​So what do you think? Have you see “Destroyer” yet? What re your thoughts on it? Let us know in the comments section below or on our Twitter account.