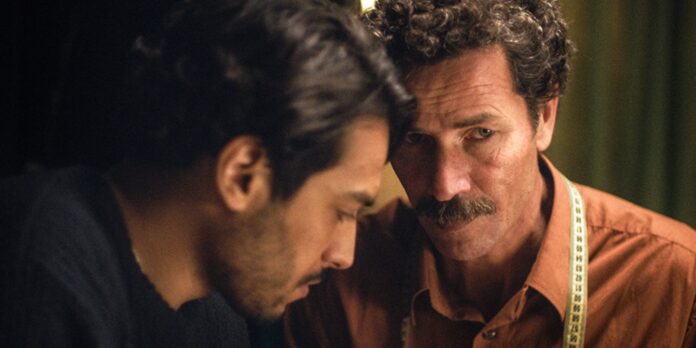 THE STORY – Halim and Mina run a traditional caftan store in one of Morocco’s oldest medinas. In order to keep up with demanding customers, they hire a talented young man as an apprentice. Mina slowly realizes just how much her husband is moved by his presence.

Love is a many-splendored thing. Love lifts us up where we belong. All you need is love! The poets have been extolling the virtues of love throughout the ages but have only rarely talked about how complicated and thorny an emotion like love is. Maryam Touzani’s “The Blue Caftan” fully acknowledges this, crafting a story about three people desperate for love, who all need different forms of it in different ways, and for different reasons. It is, on the surface, about Halim (Saleh Bakri), a secretly gay married man who works as a maalem (a traditionally trained dressmaker of sorts) in the medina of Salé, Morocco. But it is just as much about his wife, Mina (Lubna Azabal), who works the front of his shop and is experiencing a recurrence of a terrible illness that has plagued her for years. And it is also just as much about each of their relationships with Youssef (Ayoub Messioui), the young man whom Halim has just hired as an apprentice at a time when vanishingly few young people are interested in learning the trade. The relationships are complicated on multiple levels, and Touzani’s screenplay (co-written with her producing partner Nabil Ayouch) gives them equal weight and care, allowing us to empathize with each person. The ultimate kindness that she shows to each character – and that they show to each other – guides the film to a beautiful conclusion, and the journey there makes it one of the year’s most graceful cinematic pleasures.

The film starts with what any good maker of clothing starts with: the fabric. The brilliant blue fabric of the titular garment is shot so sensually that you can practically feel it through the screen. As Halim painstakingly works on its intricate gold embroidery, we watch it slowly transform from a mere piece of fabric into a full garment, one that is strongly crafted enough to last for decades with the proper care. Touzani is not subtle about connecting the work that goes into making the caftan to the work that goes into a loving relationship, but she does it in a way that doesn’t feel forced or overwrought. Halim may be attracted to men, but he has still been in a relationship with Mina for many years, and even with the secrets he keeps from her, nobody in the world knows either of them better than the other. Their relationship is complicated – an early sex scene between the two may be instigated by her. Still, he doesn’t shut it down, giving her the attention her body craves even though he may have to throw his mind elsewhere in order to do so. As Mina succumbs more and more to the disease (heavily implied, but never stated, to be cancer) ravaging her body, their relationship hits new peaks of openness and generosity, a powerful reminder that love is so much more than sex and physical attraction.

Touzani draws Youssef just as richly as she does Halim and Mina, even though we get less of him. A mostly quiet observer, when Youssef speaks, he is short and to the point, only interested in living as honestly as he can in this society. Messioui is a wonder in his debut performance, bringing such weight to each glance that we understand him perfectly even though his screen time is limited. His face has an openness that captivates, even through the character’s stoic nature. Messioui’s navigation of the knotty love triangle between Youssef, Halim, and Mina is indicative of a true talent. Azabal and Bakri do their part, too, delivering two of the best performances of the year as a couple in crisis finding renewed connection even as they are being led apart. Bakri’s hangdog face does a lot of work to bring us into Halim’s melancholy, but the way he captures Halim’s pride as a skilled craftsman and wonder as both Mina and Youssef surprise him in different ways is just as palpable, allowing us to watch as Halim slowly opens up to the world around him. Azabal quietly gives the best performance in the film, as impressive for its interiority as its exteriority. Her emotional range is stunning, especially in Mina’s ever-changing feelings toward Youssef. But it is her physicality that really makes the performance. She charts Mina’s physical decline without the aid of prosthetics, contorting her body and letting her face hang in ways that look like her body is truly being destroyed from the inside. It is a tremendous feat of physical acting, one that makes it impossible not to feel for Mina, who could so easily have been the villain of the piece.

By the time the film reaches its beautifully sad yet ultimately hopeful conclusion, all you can feel is the love that connects the three main characters. It is love in many forms – sexual, fraternal, familial, respectful – but always unconditional, the one thing love should always be. “The Blue Caftan” is very much about three people learning the full extent of what love is, how love can change over time, how it can be tested, and how it tests us. In the deeply complicated, often messy humanity of its main characters, the film does indeed become a many-splendored thing, with the generous performances and graceful direction lifting us up where we belong. Maryam Touzani has shown us how the world could be if we open ourselves up to love and let love rule.