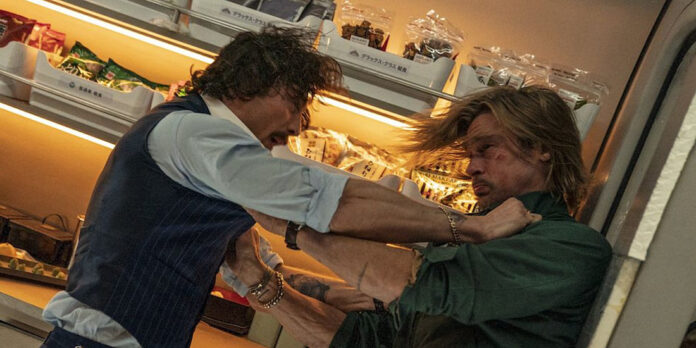 Next Best Picture’s weekly analysis of the box office and what the numbers mean for the industry, films, filmmakers, and the Oscar race is back for another week! This is a re-occurring post every Monday morning, so stay tuned for more box office information and hopefully more additions to these posts in the future. Familiar holdovers and a slate of niche releases took center stage during the quietest weekend of the summer movie season so far.

The high-energy action/comedy hybrid “Bullet Train” remained in first place with a $13.4 million gross. The second-weekend performance here represents a 55% decrease from last week’s decent $30 million opening. I would say both weekend performances so far deserve a similar solid-yet-unspectacular appraisal.

Why hasn’t “Bullet Train” broken out? The simple answer is that the film did not live up to expectations. A 53% score on Rotten Tomatoes and a B+ CinemaScore are underwhelming considering the all-star ensemble and potent premise on display here. Releasing an R-rated blockbuster also puts an extra barrier on the film’s financial potential. Even if the film isn’t a smashing success, distributor Sony likely isn’t sweating these results. The film only decreased by 40% in its second weekend internationally. It also remains a viable worldwide player with a $114 million total so far. Considering the $90 million budget, “Bullet Train” will be a modest success story as long as the film holds better than its lukewarm second weekend.

Holdovers remained in control throughout the weekend. “Top Gun: Maverick” rose above the crowd with $7.1 million in third place. A savvy re-release strategy by distributor Paramount jolted this week’s performance 1.5% above last week’s total, which adds up to whopping $673.8 million domestically/$1.38 billion worldwide grosses so far. Tom Cruise and Paramount are taking several victory laps for confidently staying the course on the film’s theatrical release after fielding several streaming inquiries.

“DC League Of Super-Pets” ($7.11 million in second place) and “Nope” ($5.3 million in fifth place) enjoyed slight drops in the 30% range after underwhelming second/third weekends. I still consider “Nope” a solid-enough enough win for the Peele Brand ($107.5 million domestic so far on a $68 million budget), while “DC League Of Super-Pets” continues to draw tepid results as an expansion of the DC Universe ($109.7 million so far on a $90 million budget).

After earning the second best per theater average in its debut, “Bodies Bodies Bodies” enjoyed moderate success in its nationwide expansion. The film’s $3.2 million gross in eighth place matches the debut of another summer horror vehicle from distributor A24, “Men,” despite a smaller theatrical count for “Bodies Bodies Bodies” (1,290 theaters for “Bodies Bodies Bodies” versus 2,212 from “Men“). My initial thoughts on this “Bodies Bodies Bodies‘” expansion were mixed (I foolishly predicted a $6-$9 million weekend total last week), but I should have considered some essential factors. Opting for a slower rollout versus an immediate nationwide is building for a longer run. It’s a strategy that could pay dividends during the dessert of August releases. The buzz is also really growing here, and I can attest personally to it being an audience favorite with late-night crowds. With $3.5 million in two weeks, “Bodies Bodies Bodies” is performing respectably for indie stalwart A24. If the film can captivate some momentum in its next nationwide push, I could see director Halina Rejin’s horror satire carving out a steady place in the late-August box office window.

On a new release front, a slew of intriguing genre entries floated around the Top 10. The Lionsgate horror ride “Fall” slid in the tenth spot with $2.5 million in a 1,548 theater debut. I give the distributor credit for escalating the marketing push before its opening week, but the title remained a relative sleight item in their release calendar. Still, a $1,618 per theater average is nothing to scoff at, considering the film’s low-profile prospects. Some will argue this should have gone directly to streaming, but I respect Lionsgate for maintaining the course theatrically. The studio took a sensible bet on a $3 million production, with the results likely inspiring enough goodwill for the distributor’s minimalist production.

The Diane Keaton body-switch comedy “Mack And Rita” flatlined with $1 million in 13th place despite possessing the highest theatrical count for a new release (1,930 theaters). Distributor Gravitas Premiere is admirably stretching its ambitions with broader theatrical releases as a mid-budget distributor. That said, the results continue to uninspire (The King’s Daughter struggled with $723,150 thousand in its 2,170 theater debut earlier this year). I still think the distributor can have better results going forward, especially considering Mack and King’s received little fanfare from critics and audiences (“Mack And Rita” earned a shocking D+ CinemaScore this weekend).

The Sundance standout “Emily The Criminal” accumulated a respectable $668,990 thousand in 473 theaters. The Aubrey Plaza crime thriller parleyed its critical standout status successfully for distributor Roadside Attractions (the film earned a 93% score on Rotten Tomatoes). I think the studio’s more niche rollout is a sensible choice during this busy summer weekend. An expansion in the film’s second week will be more telling, but Roadside likely considers this a strong-enough start to build upon.

I think many will write off this week as a disappointment for what’s been a prosperous summer financially for Hollywood. The Top 10’s combined $65.2 million domestic total scored lower than the $73 million Top 10 total of the May 20-22 weekend to make for the lowest weekend gross of the summer movie season. It’s a meager total, but that isn’t necessarily uncommon for the quiet August calendar. The month is typically synonymous with blockbuster holdovers, risky big-budget productions, and a wide array of indie/genre films. I do think one of the major distributors should have taken a chance moving a September or October title up. Universal’s “Bros” or “Tickets to Paradise” would have presented some appeal as counter-programing offerings.

Next weekend brings the debut of the Idris Elba-led survivalist thriller “Beast.” The film boasts an old-school Hollywood charm in its earnest approach to shlock entertainment. Combined with Elba’s movie star presence, I can see enough appeal for this to open at number one with a debut in the $11-$15 million range.