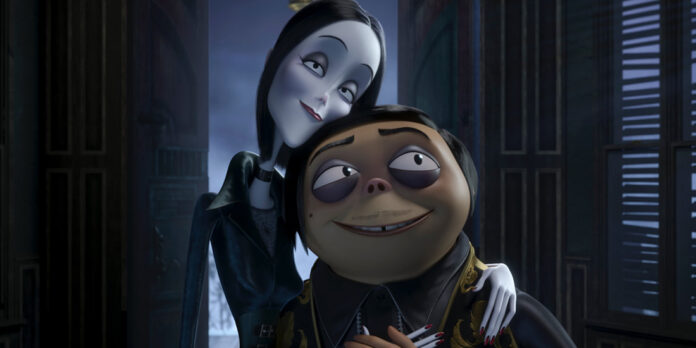 THE STORY – Members of the mysterious and spooky Addams family — Gomez, Morticia, Pugsley, Wednesday, Uncle Fester and Grandma — are readily preparing for a visit from their even creepier relatives. But trouble soon arises when shady TV personality Margaux Needler realizes that the Addams’ eerie hilltop mansion is standing in the way of her dream to sell all the houses in the neighborhood.
​
THE CAST – Oscar Isaac, Charlize Theron, Chloë Grace Moretz, Finn Wolfhard, Nick Kroll, Snoop Dogg, Bette Midler & Allison Janney​

The film opens with the marriage of Gomez and Morticia Addams in an unnamed ‘old country’ village, and just as they are about to be joined over a lime and coconut beverage, the local villagers come with their pitchforks and torches to chase the Addams clan away. In despair of ever finding a place that will allow them to hide, the newly married Addamses travel to New Jersey and find a haunted and abandoned insane asylum to set up their family. 13 years and two children later we come upon the Addams again as they are preparing for a special ceremony, the ‘mazurka’ to be performed by Pugsley (Finn Wolfhard) in front of the whole Addams clan.

Unknown to the Addams’, a celebrity home improvement/interior designer icon, Margaux Needler (Alison Janey) has built a stylish conglomerate neighborhood, just below the Addams house, leaving them exposed to the locals. Her rebellious daughter takes a liking to Wednesday (Chloe Grace Moretz), eldest of the Addams children and the two form a fast friendship over their desire to rebel from their parents. Determined to either force the Addams to assimilate into her community or leave, Margaux embarks on a campaign of disinformation and hate that ultimately brings the Addams and Miss Needler into a direct confrontation.

MGM made a distinct effort to emulate the style of the original Charles Addams comics, at least with the Addams characters and settings. Otherwise, the style feels reminiscent of certain Dreamworks productions and the two designs clash in a way that was probably meant to illustrate the differences between the two groups, but ends up looking unintentional and poorly thought out. The animation is pretty, but it isn’t anything special like some of the other films released this year. The film does its best to engage modern audiences with current music, including the strange inclusion of ‘Drop It Like It’s Hot’ (Snoop Dogg voices Cousin It) complete with the word pimp, but as in the 1990’s films, it is in glaring contrast to the rest of the film.

By far and away the best part of the movie is the voice acting. Oscar Isaac and Charlize Theron shine as Gomez and Morticia and Nick Kroll offers an entirely different but thoroughly enjoyable Uncle Fester. Finn Wolfhard barely gets an opportunity to speak and unfortunately, Chloe Graze Moretz is limited by the poor scripting and plot choices for her character. The movie crams in every big name it can with the side characters and includes cameos from folks like Martin Short and Bette Midler and while each does a great job, none gets more than a line or two begging the question why they are included at all.

“The Addams Family” is for the younger set, the most appropriate viewers being ages 8 and below. Due to the low age level, the film never engages with its darker side, a serious detriment to an Addams Family story, especially for older audiences. The heavy-handed message is about being yourself and accepting others but it does this in the most obvious of ways and it feels derivative of other kids’ films. For those looking to introduce their young children to the joys of darker comedy and spooky stories, this is a good start, but for a longtime fan or older children, this is probably too tame to really be enjoyable.