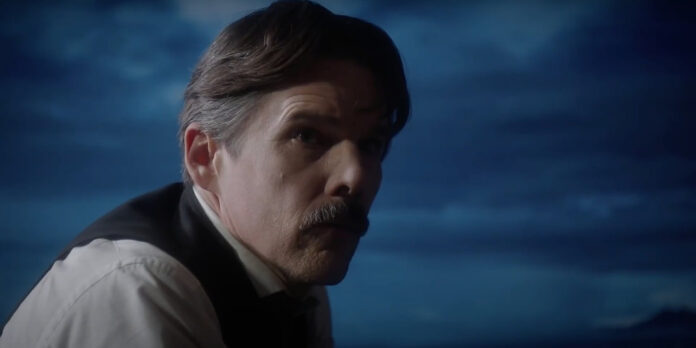 ​​​Most audiences are well-versed in the tropes of biopics, so much so that it makes sense for a film to attempt to throw off the typical trappings of the genre. Two films this year attempt this in remarkably similar ways. “Radioactive,” and “Tesla” each use flash-forwards and a style-over-substance approach to tell the story of a late-19th century innovator. While Marjane Satrapi’s “Radioactive” mostly worked thanks to Rosamund Pike’s chilly turn as Marie Curie, “Tesla” can’t fully be saved by Ethan Hawke’s performance. Nikola Tesla is a fascinating figure, but quite a bit gets in the way of telling his story here.

To be clear, writer/director Michael Almereyda’s big stylistic swings deserve acknowledgment for the daring, unconventional choices that they are. “Tesla” is narrated by Anne Morgan (Eve Hewson), the daughter of J.P. Morgan (Donnie Keshawarz). While Anne is a contemporary of Tesla and a character in the film, her anachronistic narration often breaks the fourth wall and features her sitting with a computer and projector, occasionally googling information about Tesla. Elsewhere, a scene between Tesla and Thomas Edison (Kyle MacLachlan) plays out while the men lick ice cream cones, until the scene cuts and replays, this time without the ice cream cones and with much more tension.

It’s so much easier to talk about these stylistic choices rather than the plot of the film itself because Almereyda seems much more interested in the former. He eschews realism at every turn, which is admirable though highly distracting. Many scenes feature painted or projected backdrops that are intentionally noticeable. Tesla is one of the most overlooked inventors in history, but the most memorable moments in this film have little to do with his story. In one scene, Edison pulls out an iPhone. Perhaps one of the only images that will stick with me from the film is when Tesla performs a karaoke rendition of Tears For Fears’ “Everybody Wants To Rule The World.” No, really. But it’s memorable not because of any emotional impact, just because of how utterly strange it is.

These experimental choices might have had a greater impact if the film had as much energy to engage the viewer. For me, few of them enhanced the greater narrative or brought a new perspective to the inventor. Instead, they distracted, and more often than not, perplexed me. It doesn’t help that the film only touches on moments of Tesla’s life without diving deep into each section. As someone who only has a passing knowledge of the inventor, I don’t feel that I left the film knowing too much more about his life. Thankfully, Morgan’s Google-driven PowerPoint presentations provide some much-needed information, though often disrupt any sort of flow the film is trying to find.

Hawke’s take on Tesla similarly throws off historical accuracy, though with greater success. He doesn’t attempt to mimic Tesla’s Serbian accent and doesn’t really age his character up or down despite the years that span of the story. But these choices help to focus his performance on emotion rather than setting, creating a strong character. His performance highlights the great difference of personality and business savvy, but not intellect, between Tesla and Edison. Throughout the film, Tesla misses opportunities because of his lack of social skills, often wearing the deep stare of being lost in thought.

Perhaps Tesla himself would prefer throwing off conventions and challenging the status quo to tell his story. Maybe it’s an appropriate way to honor this groundbreaking individual and his achievements. It’s possible that, like the innovator himself, “Tesla” is ahead of its time and will be more appreciated in years to come. More likely, though, is that the film is just a fascinating misfire.