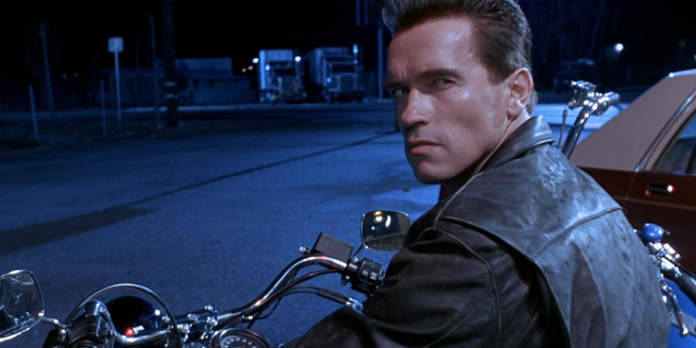 ​THE STORY – In this sequel set eleven years after “The Terminator,” young John Connor (Edward Furlong), the key to civilization’s victory over a future robot uprising, is the target of the shape-shifting T-1000 (Robert Patrick), a Terminator sent from the future to kill him. Another Terminator, the revamped T-800 (Arnold Schwarzenegger), has been sent back to protect the boy. As John and his mother (Linda Hamilton) go on the run with the T-800, the boy forms an unexpected bond with the robot.
​
THE CAST – Arnold Schwarzenegger, Linda Hamilton, Edward Furlong, Robert Patrick & Joe Morton

“Terminator 2: Judgment Day” may very well be the best film of writer/director James Cameron’s career. It is certainly regarded as a classic film of the action genre, and a perfect example of how to do a sequel right. The special effects were groundbreaking for their time and the pacing is relentless, thus allowing for a breezy good time at the cinema. Despite a few missteps in its screenplay, the characters and how Cameron expands upon them from the first film is where “Terminator 2: Judgment Day” transcends its predecessor.

It’s the late 90’s in Los Angeles and Sarah Connor (Linda Hamilton) is living in an insane asylum due to her hard to believe proclamations that the world will soon be engulfed in an ongoing war with machines controlled by Skynet. Where before the Terminator (Arnold Schwarzenegger) was sent back in time to kill a still pregnant Sarah Connor, this time, he is sent back to protect her from an even greater enemy known as the T-1000 (Robert Patrick) that threatens to kill her now fully grown teenage son, John Connor (Edward Furlong). Together Sarah, John, and the Terminator must find a way to stay alive for as long as they can and attempt to shut down Skynet in hopes of preventing Judgment Day.

There have been too many times in the history of film where a unique voice such as James Cameron’s comes along and gives us a surprise hit, which the studio rushes to make a sequel for. Most of the time, that sequel is not as acclaimed as the first film for it’s usually a rehashing of the same storyline, but with a bigger budget. “Terminator 2: Judgment Day” is certainly bigger than “The Terminator.” And yes, the main concept of sending two opposing sides from the future to secure a target in an attempt to either destroy or save humanity is used here again as well. However, where “Terminator 2: Judgment Day” improves upon its predecessor is with the handling of its characters. Linda Hamilton is not playing the damsel in distress this time around. Instead, she is in control of her own fate (Or so she wants to believe) by going full blown “commando” in the role of Sarah Connor. She plays the role authentically and gives the character much-needed depth, which shows a clear character arc from the last film to this one. As for Arnold, it’s a little bit more challenging as he is a machine deprived of any human emotion. His likability, however, starts to shine through as the film goes on due to his interactions with John Connor. While John simply thinks he has a walking/talking robot fully capable of obeying his every command, he establishes a bond with the unexpressive machine who doesn’t understand emotions such as fear, love and sadness. All of these qualities are expressed through the troubled teenager John Connor and it’s where the film establishes its emotional connection to the audience.

Without this emotional connection, the action scenes would not work as well as they do. Thankfully, Cameron pulls off enough spectacle that “Terminator 2: Judgment Day” would’ve been still an unequivocal hit. Just not a very good one. The special effects were way ahead of its time, especially for the T-1000 who is fully made up of liquid metal and can transform into many items such as knives and even other people. It is here though that Cameron’s biggest faults as a filmmaker shine through and that is his ability as a screenwriter. There are a lot of loopholes that present themselves in the story, especially in regards to the T-1000 and why he can do certain things but not other things (How exactly does he travel back through time if he’s made of liquid metal when the franchise establishes that only human flesh can pass through time?) There are more than a few times throughout the film where if you think too hard about the time travel concept that your brain may start to hurt. And if that doesn’t do it then James Cameron’s ear for dialogue unsubtle and unoriginal dialogue will do it. Cameron has throughout his career, established himself as an excellent storyteller with fantastic ideas and vision, but with hammy scripts. “Terminator 2: Judgment Day” is no exception.

So while “Terminator 2: Judgment Day” certainly has its faults, there is no mistaking that this is still one of the most entertaining action films of all time. It’s that rare sequel that is better than the original (Although the first film does have its champions) and gave Arnold Schwarzenegger one of the biggest roles of his career. The real star of the film is James Cameron. But not James Cameron the writer. James Cameron the director. There are certain set pieces in here that all these years later still hold up with their masterful blending of practical special effects and digital wizardry that was in its early stages in the 90s. Subsequent sequels failed to deliver as satisfying groundbreaking special effects and character work (Mostly due to the absent involvement of James Cameron), that is found in “Terminator 2: Judgment Day.” As a result, it still stands as the defining film in this franchise.