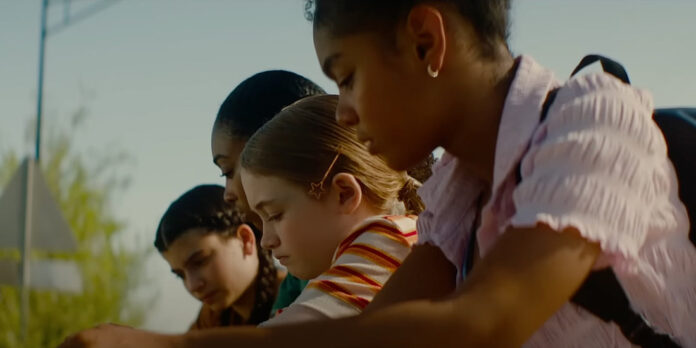 THE STORY – Four best friends on the brink of starting middle school realize their lives are about to change forever. On the last weekend of summer, they set out to make the most of it.

​​​​Many people can relate to the feelings that come with the summer before middle school and high school. You’re aware that you’re about to switch schools, and with that comes the potential to make new friends, lose old ones, experience things for the first time, and possibly even find change within yourself. At that point in life, adulthood and the future feel so far, but it always ends up finding a way to creep up on you when you’re least expecting it.

Four female friends in “Summering” know that change is coming as they enjoy their last few days of summer break before starting middle school, but what lies ahead is beyond their imagination. Before they dive head first into a new stage of their lives, they stumble upon their own “Stand By Me” adventure in James Ponsoldt’s latest film. But, sadly, the homage to the classic film falls flat in several ways, mainly with how “Summering” struggles to figure out what type of film it wants to be and its lack of development with its characters.

The film opens with what appears to be the start of a slasher film as three young girls are cowering in fear in a bathtub. As a giant, scary shadow appears on the other side of the curtain, it’s revealed to be another young girl chasing after them in a friendly game. As the four girls frolic outside — with some dreamy shots captured by cinematographer Greta Zozula — it seems like there’s not a care in their world.

However, their innocence is quickly cut short when they discover a dead body one afternoon. Rather than calling the police, which Mari (Eden Grace Redfield), the most reasonable of the bunch, suggests, they instead set out to solve the mystery surrounding the man’s death. We also soon realize that these young girls are experiencing personal struggles other than just starting a new school year. Daisy (Lia Barnett) has a tough home life that includes a distant mother and a father who recently disappeared; Mari is worried about going to a Catholic school and being away from her friends; Spiritual Lola (Sanai Victoria) and more down-to-earth Dina (Madalen Mills) also seem to be drifting apart. It’s a tough period in childhood for anyone to navigate, and these four girls each have plenty of anxieties that keep them up at night.

Unfortunately, the script fails to develop these characters in a nuanced way. Though we know the girls’ problems, there’s no other development among them throughout the film. Daisy seems defined by her unfortunate home life rather than any other character trait. There’s also nothing memorable about the three other girls. Rather than being complex humans — all preteen girls are quite multifaceted, in case you didn’t know — they become these two-dimensional characters who are, in all honesty, boring to watch. Not even the dialogue sounds remotely close to what young girls, or any preteen, would say. “In case you haven’t noticed, growing up isn’t great,” is uttered at one point. When have you ever heard a child say that? A female writer was desperately needed on the team to add something, anything more to these characters.

This lack of depth is also caused by a film that seems confused by the direction it wants to take. It goes from this dreamy, idyllic opening to a mystery that ends up folding into a coming-of-age story. By the end of it, there was no point in having the dead body in the film anyway since there wasn’t a whole lot of mystery to be solved, and there wasn’t anything interesting that happened. Instead, the film should have just let preteens be their messy preteen selves. It’s the strongest when the girls get to talk about everything and nothing in particular, like how most kids speak. At the start of the film, the girls discuss what they’d rename themselves and the pros and cons of wearing school uniforms. It’s sweet, innocent conversations like this that actually make a coming-of-age film so pure and enjoyable to watch, not forced conversations that do nothing but try to progress a shallow story forward.

“Summering” could have been something special if it let its four female heroes shine and show their true selves, but a messy script with an uninteresting mystery took precedence. It’s easy to say the script and plot, like its characters, have much growing to do, but with an 87-minute runtime, it thankfully doesn’t overstay its welcome.