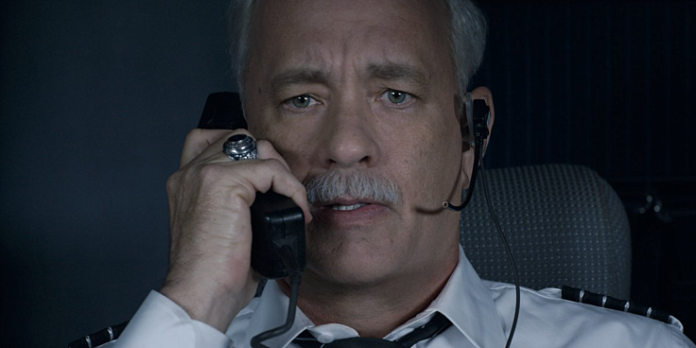 THE STORY – On Jan. 15, 2009, Capt. Chesley “Sully” Sullenberger (Tom Hanks) tries to make an emergency landing in New York’s Hudson River after US Airways Flight 1549 strikes a flock of geese. Miraculously, all of the 155 passengers and crew survive the harrowing ordeal, and Sullenberger becomes a national hero in the eyes of the public and the media. Despite the accolades, the famed pilot now faces an investigation that threatens to destroy his career and reputation.

​Director Clint Eastwood can be very hit or miss for me. For every “Mystic River” and “Letters From Iwo Jima” we get a “Hereafter” or “J. Edgar” with something like “American Sniper” somewhere in between. Eastwood is an old school director and his latest film “Sully,” is an old school movie which portrays how in a society reliant on computer technology (Something Eastwood has never defaulted towards as a filmmaker), there’s still a professional mentality that can only come from a human being’s instincts based on years of experience. This is the film’s most interesting aspect as Eastwood and writer Todd Komarnicki struggle to find a compelling story within the true heroic story of “The Miracle On The Hudson.”

Based on a true story which took place on January 15th, 2009 in New York City, Captain Chesley “Sully” Sullenberger (Tom Hanks) pulled off what would be known to the nation as “The Miracle On The Hudson.” After experiencing dual engine failure moments after takeoff at LaGuardia Airport at an extremely low altitude, the experienced captain made the decision to land the plane on the Hudson River with an attempted water landing. The landing is a success and all of the passengers, the crew, including Sully himself, are all rescued and survive. Despite the fame and adoration from millions of people, Sullenberger’s actions, along with his co-pilot Jeff Skiles (Aaron Eckhart), are investigated and called into question by the NTSB (National Transportation Safety Board) where both of their professional careers hang in the balance.

Tom Hanks is one of, if not the most reliable actors in all of Hollywood. His everyman image and earnestness which he brings towards every role always help to elevate the film around him (See “Saving Mr. Banks” and even this year’s “A Hologram For A King”). In “Sully,” Hanks channels the paranoia, trauma, moments of self-doubt mixed with moments of  confidence, to give a layered performance of the famed and heroic Chesley “Sully” Sullenberger. Everyone else around him does not have the same level of depth with which Hanks is able to find in the role as great actors such as Aaron Eckhart, Laura Linney (Who plays Sully’s wife over the telephone back at their home) and “Breaking Bad’s” Anna Gunn (Who plays one of the NTSB investigators) are all here for show in roles that anyone else could have played.

And therein lies the problem with “Sully.” The story is simply not that interesting enough to be converted into an effective and exciting film. Eastwood knows this and as a result promoted his longtime assistant editor Blu Murray to head editor on this film and the result is a lean mean 96-minute machine. It’s the breeziest Eastwood film possibly ever, as most of his films tend to be over 2 hours long. To fill this time, the incident with the plane is played multiple times throughout the film from different perspectives so that the audience can be left in suspense as to whether Sully and his co-pilot are going to lose their jobs and pensions for this incident. Writer Komarnicki and Eastwood understand that most people know everyone survived the water landing. However, they also understand that audience members may not understand the aftermath of the incident and how this supposed “hero” may have had an opportunity to possibly land the plane at the airport instead of the Hudson River and in the process may have jeopardized all of the 155 on board. It is here where the film finds its storytelling structure and its fine all around, but nothing revelatory nor vital.

The best scene in the film is actually not the crash, nor the board room hearings where Sully and Skiles must explain themselves before the NTSB, but in the aftermath of the landing where the freezing January weather threatened every passenger on board in the Hudson River while they awaited rescue. Eastwood does a great job of showing all of the forces of New York City coming together to save these individuals before they succumb to hypothermia and the results are impactful and rousing. “Sully” is ultimately a film all about heroes, which is a common theme through other Eastwood films (“American Sniper,” “Invictus,” “Gran Torino”) and he gives equal weight to the law enforcement, members of the red cross and others just as much as he does to “Sully.”

Despite a few narrative struggles to get through, Eastwood does the best he can with what is ultimately a fine pairing of his directorial strengths towards the material. His greatest asset is Tom Hanks as the film’s lead but everyone else is wasted due to the tight nature of the story (Laura Linney’s scenes only happen over a telephone with Sully). “Sully” is an old school movie made by an old school director who wants us to have heroes to look up to in moments of great need. He idolizes them and is fascinated with exploring them, especially in a technology-reliant society where the actions of a hero can be called into question by a computer. “Sully” is a film all about professionalism, heroics and celebrates the act of getting the job done.