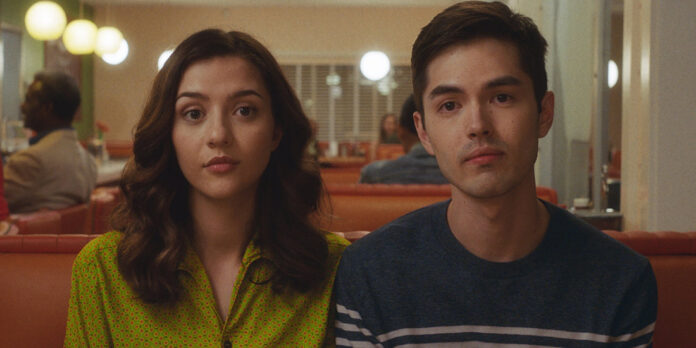 THE STORY – Todd and Rory are intellectual soul mates. He might be gay but she might not care.

​​It continues to be fascinating how stories about the LGBTQ+ experience evolve. There are so many different shades that can be explored within this community, particularly from the perspectives of younger people. There’s great potential to discover new perspectives that exist within shades of complexity in terms of these experiences, and getting the chance to discover one that’s artfully told is a true pleasure. “Straight Up” is another such example that looks at the shifting focus that sexual identity plays within the pursuit of romance, and the results are effectively charming with an authentic, emotional resonance.

The film centers around Todd (James Sweeney), a young gay man filled with anxiety over the many problems in his life. Whether it’s his obsessive-compulsive disorder or complicated relationship with his parents, he’s always on the edge of a breakdown showcasing heightened neuroticism. After witnessing one failed attempt at a relationship after another, he surmises that maybe his salvation lies in the other sex. A chance meeting with Rory (Katie Findlay), an aspiring actress dealing with her own uneasy nature about her troubled life, sparks an odd romance between the two. They discover a great bond with each other, but that compatibility is tested quickly and often.

Sweeney not only stars but also serves as writer and director. Even as a debut solo feature, it’s an incredibly accomplished work. The filmmaking and dialogue are so tightly controlled that it skirts the danger of being overwrought. The direction incorporates precise framing to mirror the static world Todd likes to imagine himself in, which balances the looser camera that circles Rory. The choices presented in the direction are very confident and often striking, leading to some impressive technical sequences that help to illuminate the emotional state of these characters. It all results in a great example of how a low budget film can still feel as if it has a fierce perspective in terms of the filmmaking.

The screenplay is just as controlled as the direction, though it’s here where some of those decisions can become a bit strained. The fast one-liners can often be quite humorous, though there are occasions when they don’t always land. Many times, the story comes across as too precious regarding its jokes that don’t rise above basic sitcom level mix-ups. Still, this exploration of millennial angst, one that dives into the complexity of identity and isolation, feels grounded and profound. Despite some overtness with the writing that can come across as overdone, there’s a deeply affecting story at its center that looks to uncover the inner turmoil of lonely people.

An element of success that’s relied on regarding stories about romantic interests is the chemistry between its principal actors. Fortunately, Sweeny and Findlay excel here and offer incredibly endearing portrayals. Sweeney has slightly more of the focus, and his manic energy perfectly fits the tone of the piece. He fires off quips quite naturally with a fearless delivery. However, it isn’t all just humorous asides. There’s a complex emotional core underneath that’s exposed as he gets drawn further out, and Sweeney manages to have some incredibly effective moments revealing a damaged and vulnerable young man. The same is extended to Findlay, operating a slightly more free-spirited persona that still wades through a sea of insecurities. She perfectly captures an individual masking sensitivity with a strong demeanor, and the balancing act is well realized. Both of them are great on their own and work magically together.

While Sweeney and Findlay are the highlights of the cast, the supporting players do their part to make their appearances engaging as well. The best among them is Tracie Thoms as Todd’s therapist who always manages to keep up with his erratic projections while never falling into unrealistic histrionics. There’s a warmth she exudes that’s never overplayed. Some of the friends in the circle of the protagonists are fine as well, though there’s a slight disappointment in the characters of Todd’s parents. Betsy Brandt and Randall Park are good in their own right, but their presence in the story provides some surface-level exploration into Todd’s mental state and ends up feeling a bit wasted. The performances themselves are decent, but they exist in a section of the film that feels rather tedious.

At times, the film does become too self-indulgent in its quirkiness, and those are the moments where the humor falls flat. Additionally, some characters are less interesting and the story itself as a result. At the same time, so much of “Straight Up” still manages to have a resonant commentary on what’s truly valued in our relationships, and this story is told in such a poignant and captivating way. Sweeney’s writing and direction are bold and interesting, while his performance manages to be exceptional as well. The same compliments for Findlay for a fantastic achievement in playing such a layered character. This film stands as another great example of the ever-evolving landscape of films trying to find the unique sides to a diverse landscape of stories. One can only hope future developments from this team yields similar results.