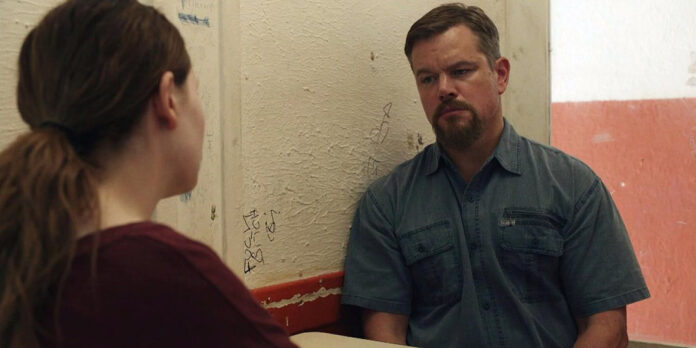 THE STORY – An American oil-rig roughneck travels to Marseille, France, to visit his estranged daughter, in prison for a murder she claims she didn’t commit. Confronted with language barriers, cultural differences and a complicated legal system, he soon builds a new life for himself as he makes it his personal mission to exonerate her.​
​
THE CAST – Matt Damon, Camille Cottin & Abigail Breslin

Tom McCarthy has always been a filmmaker who places characters at the forefront of his stories despite how simple or complicated they might be. “Stillwater,” his return to dramatic storytelling following his Oscar win for “Spotlight” (he directed the underseen “Timmy Failure: Mistakes Were Made” in between the two projects). His latest film is his most complex and ambitious yet, clocking in at nearly two and a half hours long. Borrowing elements from the true-life Amanda Knox murder case, “Stillwater” tells a story that constantly shifts gears and evolves into something new with each passing act in the screenplay. It may not always come together as well as some of McCarthy’s other films have before. However, his dialed-in focus on his characters remains his most significant asset, elevating this material to something worth watching.

Although the film is titled “Stillwater,” the story does not spend much time in the Oklahoma city. Instead, McCarthy’s latest follows conservative Bill Baker (who claims he didn’t vote for Trump because he had a criminal record from many years ago) in a “fish out of water” story as he builds a life for himself in the French city Marseille. He doesn’t know the language (as the film constantly calls attention to with some light humor), doesn’t understand the customs, and is dealing with lawyers and private detectives who prove useless in his attempts to free his daughter Allison (Abigail Breslin) from prison for the supposed murder of her lover, a murder she claims she did not commit while she was living abroad. She’s been in prison already for five years, with four more years still to go as her hope for release dwindles. Bill is well-intentioned but flawed as he attempts to take matters into his own hands. Situating himself within the city, conducting his own investigation, Bill meets and gains help from and a single french mother named Virginie (Camille Cottin), and her daughter Maya (Lilou Siauvaud), creating a new and unexpected life for himself as time passes.

“Stillwater” follows a traditional three-act structure, but the directions the story goes in and evolves into is filled with surprises at every turn. Without getting too much into spoiler-filled territory, the first act is what’s being sold in the film’s marketing and trailer. It functions as a straight-up thriller you would typically find in a Liam Neeson starring action vehicle (minus the action). Bill navigates his way through the French city, exploring every angle he possibly can to free his daughter, even if it means putting himself in harm’s way. Then, there is a setback and the second act begins. This is where the movie fundamentally switches gears and turns into an unexpectedly meditative character study, with a much slower pace than what came before it. This will probably prove to be divisive for most viewers. Still, the increased focus on Bill’s character growth and his relationship with Virginie and Maya wisely sets us up for the third act, which turns into a melodrama, mixed with some of the tension we experienced in the first act coming back into play. There are some plot contrivances involved to make the plot work, but what sells it all is the reserved and grounded performance from Matt Damon.

A god-fearing redneck who may not be the sharpest tool in the shed (although he’s quite a handyman in said shed), Bill is a character who many will have pre-conceived notions about when the story begins. However, by the time the story reaches its profound and reflective end, if Tom McCarthy and Matt Damon especially have done their work correctly, you’ll think much differently of Bill by the time the credits roll. Damon’s work has an obsessive quality not just in how the character is motivated to achieve his daughter’s freedom but also how much Damon imbues the character with a soul, exploring every nook and cranny of what makes this man tick. The way he walks, talks, and carries himself is all slightly altered from Damon’s usual persona but not in a way that is ever too showy that it distracts from the story at play. His chemistry with Camille Cottin and Lilou Siauvaud is permeated with many small moments of warmth, kindness, and empathy that, by the time we get to the film’s finale, all of the careful groundwork it’s spent time laying out pays off with an emotional gut punch. It’s one of Matt Damon’s finest performances. Credit should also be given to Abigail Breslin, Camille Cottin, and Lilou Siauvaud, who McCarthy does not skimp out on either. He provides them all with enough material to deliver fully rounded performances, which serves the narrative’s goals and compliments Damon’s work.

“Stillwater” is a curious film by Tom McCarthy in that it sees him exploring new ways to tell his character-driven stories, but in the end, that’s what it all comes back to. For all of the twists the story takes, McCarthy never forgets that it’s his characters who are the ones that will develop a connection with the audience and make the journey worth caring about. It’s a story not just about making mistakes in life but learning how to live with those mistakes and pushing on despite everything that comes from them. How do we create a new home for ourselves once the old one has been taken away from us? It may hit a few bumps in the road regarding how jarring its mood swings can be, but this is still a thoroughly engaging effort from McCarthy and Damon filled with moments of tension, drama, humor, and lots of heart.