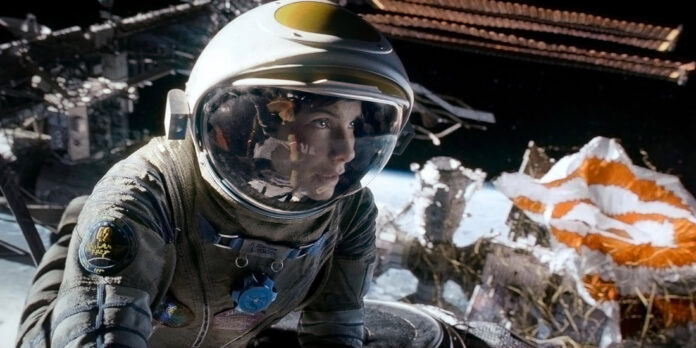 ​THE STORY –  Dr. Ryan Stone (Sandra Bullock) is a medical engineer on her first shuttle mission. Her commander is veteran astronaut Matt Kowalsky (George Clooney), helming his last flight before retirement. Then, during a routine space walk by the pair, disaster strikes: The shuttle is destroyed, leaving Ryan and Matt stranded in deep space with no link to Earth and no hope of rescue. As fear turns to panic, they realize that the only way home may be to venture further into space.
​
THE CAST – Sandra Bullock & George Clooney

​​Back in 2013, nobody could resist the pull of “Gravity.” Critics, audiences, and most notably, the Oscars all heaped praise and plaudits onto Alfonso Cuarón’s space-set exercise in tension. And while it’s an undeniable example of expert filmmaking, it’s a bit muddled as a piece of storytelling. It mostly stays true to its science fact-not-fiction genre – until it suddenly doesn’t – but its themes are a bit overwrought and obvious. Still, it’s a well-crafted film that pushes the limits of what the medium can technically accomplish.

Medical engineer Dr. Ryan Stone (Sandra Bullock) is circling the globe in her first-ever space mission. Accompanying her is Matt Kowalski (George Clooney), an astronaut on his final voyage after many years floating amongst the cosmos. Their mission is simple, but a destroyed satellite swept up on a gravitational collision course brings damage and disaster to their shuttle. Stone and Kowalski must rely on their survival instincts and quick thinking to make it back home and not find themselves floating away into the vast expanse of endless outer space.

The main draw of “Gravity” is its unparalleled special effects, both auditory and visual. The way the sound is mixed is one of the film’s more genius choices – sound doesn’t travel in the vacuum of space, and the sounds used in “Gravity” are only ever heard in reality with how the astronauts would actually hear them. Sounds are echoed through their suits, often sounding muffled, almost as if they’re underwater. Conversely, huge, cataclysmic events that would create a titanic sound on Earth are entirely silent, making them seem somehow more frightening. Visually, the film contains so much CGI and created environments that it’s practically an animated movie, save for the moments where we can see Bullock and Clooney. The visual effects are not only believable, but they’re also gorgeous. An opening, expansive shot of Earth as seen from space is striking and detailed. And our beautiful blue planet looms in the background for most of the film, serving as both a reminder of where the characters hope to return and a visual indicator of just how small we all are. In a film about the basics of survival and what it takes to exist as a simple human, seeing our giant planet from above sells the idea that we’re all united in our existence and have been ever since we first crawled out of the primordial soup. This, combined with the consistently exceptional cinematography from the always good Emmanuel Lubezki, help to make the film a thing of inarguable beauty. While much of the film takes place in either tight close-ups on the actors’ faces or in first-person shots from inside their spacesuits, Lubezki smartly chooses to pull the camera far away from the action occasionally. This makes the characters and their manmade space stations appear tiny in the vastness of space, further selling the idea that humanity is but a small factor in the infinite universe.

Such a simple visual metaphor effectively emphasizes the film’s themes. Unfortunately, some of the dialogue and more ham-fisted images work a bit too hard to make thematic points. Across his filmography, Cuarón is obsessed with exploring the pains and hardships of motherhood. “Gravity” is no different, as it’s quickly revealed that the source of Stone’s pessimism and loneliness is her own experiences as a mother. This becomes something she must overcome throughout the film, and Cuarón uses some striking yet unmistakable maternal, parental, and childbirth images to constantly remind the audience of what exactly he hopes to achieve narrative-wise. Plus, the screenplay doesn’t score any points for subtlety. There are some lackluster moments of dialogue that are meant to endear the audience to the characters, but they instead only make them seem unexceptional. And worst of all, the film’s emotional climax features a strange moment of deus ex machina, which is a far cry from the realistic approach the rest of the film takes.

Bullock turns in a fantastic performance as our main character. We’re with her for the entire film, and she manages to find different levels to the near-constant fear her character feels. She’s at times scared, panicked, and accepting of her fate, to varying levels of intensity. It’s stunning work that quickly sympathizes the audience with her character. Clooney is a bit too knowing as the been-there-done-that veteran astronaut. Unfortunately, his devil may care attitude, and constant overplaying of charm make it seem like he’s merely playing a slightly fictionalized version of himself. Still, he does come across as very experienced, and it’s easy to see why Stone is so trusting of his expert knowledge.

“Gravity” is a tense and thrilling journey exploring the unending resilience of humanity’s survival instincts. While its screenplay doesn’t entirely take off, its sound and visuals make this journey into outer space an unforgettable cinematic experience.