“STANDING UP, FALLING DOWN” 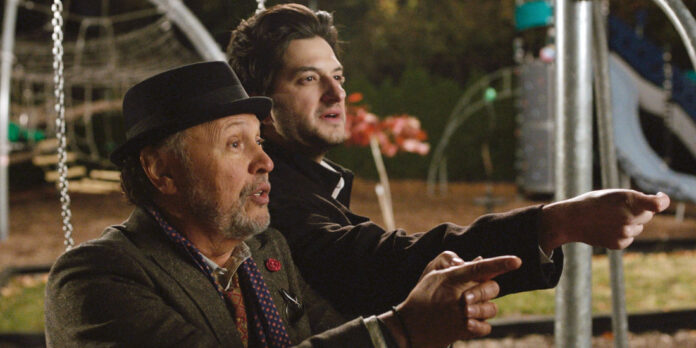 THE STORY – A failing stand-up comedian and an alcoholic dermatologist give each other the confidence to face the failures in their lives.

​​​​​​Producer Matt Ratner’s feature directorial debut is a small but charming film that bills itself as “a comedy about second chances” – a bit of truth-in-advertising if there ever was one. The comedy premiered at the 2019 Tribeca Film Festival and was a centerpiece at January’s Palm Springs International Film Festival, ahead of its opening in theaters and on VOD on February 21. The film is a familiar kind of domestic comedy that you have likely seen before, but there’s one performance in the film that will make you sit up and take notice.

Convinced that he can become stand-up comedy’s next big thing, Scott Rollins (Ben Schwartz) decides to leave his Long Island home to go to L.A. and jump-start his career. Several years later, when he’s reduced to delivering his lame routines in front of a coffee shop’s men’s room, Scott finally realizes that his career has hit rock-bottom. With his tail between his legs, a broken Scott returns to Long Island and moves back in with his family. His parents (Kevin Dunn, Debra Monk) and prickly sister (Grace Gummer) are supportive, but Scott has a sense of disappointment about himself that he really can’t shake.

One night at a local bar, he meets boozing dermatologist Marty (Billy Crystal), who, at age 70, is still determined to be the life of the party. Scott recognizes a kind of desperation in Marty’s jokes that reminds him too much of himself, so, not surprisingly, the two men become fast friends. If Scott seems to be wallowing at times in his own self-pity, he soon learns that the twice-widowed Marty has heartaches of his own, particularly involving his two children, who have become estranged from him over Marty’s alcoholism. Eventually, however, each man has an idea as to how the other can have a much-needed second chance.

The comic premise of an adult child moving back in with his parents is, to be tactful, extremely familiar, and the prospect of seeing yet another made my heart sink a little. But Ratner has a secret weapon in his back pocket: his casting. Beginning with filling his supporting bench with such great character actors as Dunn, Monk, and Gummer, who, as a sub-ensemble, help to create a far-from standard movie family. Add to that a wonderful performance by Eloise Mumford as Becky, the girlfriend Scott left in the lurch when he moved to L.A., but who has since moved on with her life.

Schwartz, best known as Jean-Ralphio Saperstein from “Parks and Recreation,” and whose improv skills are celebrated in comedy circles, delivers an unexpectedly layered performance as Scott. Yes, there’s the loosey-goosey improv comedy side there, but in between the bits, he offers a portrait of a man whose dreams have been quietly shattered, and now he has no idea what to do with his life. In these scenes, Schwartz offers work that’s surprisingly subtle and very effective.

The real reason to see “Standing Up, Falling Down,” though, is the work of Billy Crystal. We all know that Crystal is a fine actor from a film career that has endured for over 40 years, but at times he has been cast in roles that have forced him to use his jokey persona as “Billy Crystal, the entertainer.” Not here. Marty knows that he’s a broken man, thanks to his past actions that have estranged him from his children, and no matter how he tries in vain to make amends to them, that pain inside him still remains. This is a Crystal we’ve never seen before, and while many of us have suspected that he has always had it in him, “Standing Up, Falling Down” is proof that Crystal may still have a second productive career as a great character actor.

It’s a shame that this revelation is contained within such an otherwise forgettable film. With any luck, however, a better writer/director sees this performance and can soon offer Crystal a role truly worthy of his dramatic talents.