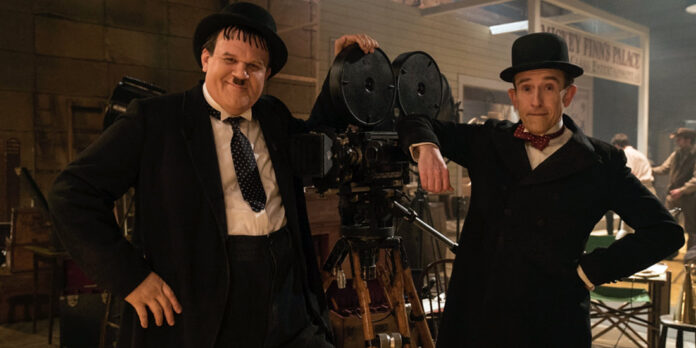 THE STORY – Already legends by 1953, beloved comedy duo Stan Laurel and Oliver Hardy set out to perform live shows for their adoring fans. The tour becomes a hit, but long-buried tension and Hardy’s failing health start to threaten their new act and friendship.

​​​​Laurel & Hardy are one of the most iconic double acts of all time. The latter’s mustache may not have stood the test of time (hardly his fault), but their trademark brand of cheeky slapstick has had a lasting influence on the cultural landscape. In “Stan & Ollie,” Jon S. Baird steps away from his grittier comfort zone (“Filth” & “Vinyl”) to tell the story of their final performances in London, and dive into a layered, turbulent partnership otherwise masked by a whimsical dance to The Cuckoo Song.

John C. Reilly and Steve Coogan were tasked with bringing the pair to life; a casting which looked good on paper and has materialized well to the screen. They share the screen with a natural dynamic and deliver with impeccable comic timing bettered only by the real Stan & Ollie. The prosthetics are lifelike (especially on John C. Reilly) and the makeup punctuates the early 20th century Hollywood design which oozes wonderfully throughout the movie.

The strength of “Stan & Ollie” lies in Baird’s use of in-jokes and pastiche to capture the essence of Laurel & Hardy. One particular scene in which they struggle up a flight of stairs in a railway station with their prop trunk only to let it fall back down at the last moment is a direct reference to the famous piano sequence in 1932’s ‘The Music Box’. The entire film is interlaced with references to their work, and this discreet intertextuality practically creates a Laurel & Hardy film within a film about Laurel & Hardy, often lifting us out of the story just enough to laugh with the filmmakers. This is not a true-to-life adaptation, but a homage and Baird’s transparent delivery is endearing.

However, the surprise double act of the film was not Reilly and Coogan, who could at best meet the lofty expectations and do little to surpass them, but their wives. Shirley Henderson and Nina Arianda, who plays Lucille Hardy and Ida Laurel respectively, have surprising chemistry, and in many scenes produce more laughs than their counterparts. If their sleazy agent represented their brains, then Lucille and Ida were the comic duo’s hearts, constantly supplementing the emotional backbone of the film whilst managing to steal the spotlight. In fact, a film in which they were the catalysts of the story is not totally unimaginable, such is the strength of their performances.

Despite all of the glowing positives, the narrative fails to propel itself adequately, and you may leave the theatre struggling to give a precise recap of what you just saw. “Stan & Ollie” feels a little less than the sum of its parts. On the one hand, this shows loyalty to the source material, but on the other, it condemns it to nothing more than a pleasant weekend cable movie.

That said, the exposition and characterization are carefully played out, posing neither as less likable and allowing both characters’ failings to emerge, all targeted towards their inevitable acceptance that their time has come; their ride to the top rapid, but their struggle to stay away from the bottom slow and grueling. As their tussle between fame and family comes to a head, Reilly particularly personifies a troubled star whose passion, health and star power never quite align. Rather, like the end of the film, that final piece is missing.

“Stan & Ollie,” enjoyable as it is, lacks the indefinable ingredient to make it great. Everything is there but it feels unfinished. It is very watchable yet uncompelling, precisely executed but sloppily conceived. However, it succeeds in its ability to introduce millennials to the legacy of Laurel & Hardy, and it succeeds in restoring the allure of classic Hollywood. It is a film that should be watched, even bought and owned, but it will not make anyone’s best of 2018 lists.