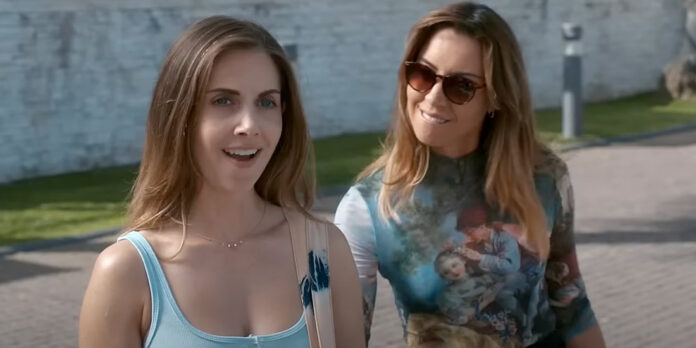 THE STORY – Flown to an Italian immersion programme on her company’s dime, what starts as a romantic getaway devolves into chaos.​

​​​​​​​​​What kind of a film is “Spin Me Round?” The plot – involving a straight-laced chain restaurant manager named Amber (Alison Brie) going on her first trip outside the US to a selective management workshop at the Tuscan villa of the chain’s handsome, reclusive owner – is a pure romantic comedy. However, the absurdity of the characters she meets pushes it more towards satire.

The opening credits are purposely styled to evoke the 70s, and the score often calls to mind Hollywood melodramas of the 40s and 50s, but not much else about it feels retro in any way. It is an odd beast of a film, but given that it was written by Brie and Jeff Baena (“The Little Hours“), who also directs, this should be precisely what they envisioned. But even after watching it, it’s hard to tell what exactly their vision was.

The cast is full of very talented people doing what they do best. Molly Shannon plays unhinged, Zach Woods plays an overconfident nerdy type, Aubrey Plaza plays the coolest (possibly deranged) chick in the room, and Alison Brie plays the uptight, incredulous straight man. And yet, as good as they are individually, they never quite gel as an ensemble. This may be by design, as these people have been somewhat randomly thrown together, and each has their own agenda for coming on this trip. But there’s no strong sense of rhythm to the scenes with more than two characters, and we don’t get to know much of anything about most of these characters outside of what is immediately apparent. Brie is a strong center for all the wackiness to orbit around. Still, since the character feels so lost so often, it sometimes feels as though Brie herself hasn’t quite figured out what’s going on and has decided to just look incredulously at everything going on around her until something makes sense.

The plot for “Spin Me Round” never quite makes complete sense of itself, though. At the end, it’s unclear what Amber’s ordeal was for – she seems more or less the same person and neither significantly happier nor any more or less satisfied with her life. This is not so much the fault of Alison Brie, the actress as Alison Brie, the writer. The screenplay is trying to do a lot, and every directorial decision seems to be pushing a satirical agenda. But the material is trying to satirize so many things – rom-coms, corporate management, foodies, Americans abroad, romance novels – that it doesn’t do any of them well. Throwing absurd characters at the thing you want to satirize isn’t enough to make a satire; you need to have a point of view on the thing you’re satirizing, and the only thing that “Spin Me Round” has to say is that these things are absurd. That’s barely enough to make a passable satire, let alone a good one. There is probably a pretty good rom-com satire to be made out of this premise, but in trying to satirize so many other things on top of that, “Spin Me Round” gets dizzy and ends up flat on its ass.