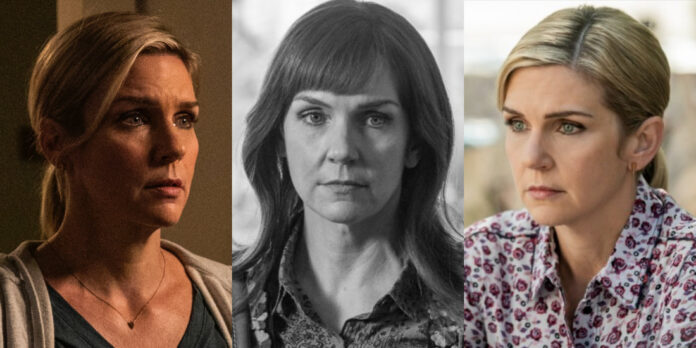 We’ve been advocating for Rhea Seehorn to get her deserved recognition from the Television Academy for AMC’s “Better Call Saul” for years, and it finally happened this year when she was nominated for Outstanding Supporting Actress in a Drama Series (along with a second nomination for Outstanding Actress in a Short Form Comedy or Drama Series for other show “Cooper’s Bar”). Now that she’s finally at this point, the show is officially over after the series finale aired this past Monday. Nominated for her performance in the first half of the season, with her submission episode being “Hit And Run,” Rhea will have an opportunity to contend for a win both this year and next year for the show’s second batch of episodes. With Emmy voting set to close next Monday evening, it’s time for voters to finally recognize what it took them already so many years to figure out: that Rhea Seehorn is the heart of “Better Call Saul.” And with these final episodes, she not only proved that again, but she went a step beyond to shattered all expectations and deliver one of the most multi-faceted and memorable character arcs to ever come out of a television series.

When Kim Wexler (Rhea Seehorn) first appears in AMC’s poetic legal drama, “Better Call Saul,” as an unknown in a world of established characters from the “Breaking Bad” universe, she lets Jimmy McGill (played brilliantly by Bob Odenkirk) take a drag of her cigarette. Shadows half eclipse their faces as they stand alone together in the parking garage of HHM law offices. The scene lights up with intimacy and comfortability. Sparks fly. Moments later, Kim heads back inside the building and fixes a garbage bin Jimmy had knocked over earlier. Without a word, she cleans up his mess. No explanation is given, nor is one necessary — a fitting introduction for an enigmatic character who unfolds with complexity. Inscrutable and without preconceived notions, Kim has one of the most fascinating character developments in television history. “Better Call Saul” creators Peter Gould and Vince Gilligan left open a door for Kim to evolve organically. With remarkable multi-layered storytelling and an exquisite performance by Rhea Seehorn, Kim Wexler becomes her own storybook within a carefully constructed world. She chooses her words so precisely that it’s a wonder what she keeps suppressed.

The sixth and final season of “Better Call Saul” is an acting showcase for Seehorn. From an emotionally cathartic breakdown on a bus to a heartbreaking monologue on poisonous love, she is the ultimate supporting player to the bittersweet end. Kim carries the weight of her own troubles while also reinforcing this series’s most consistent and prominent themes: love, self-punishment, and the gray areas of morality. As a viewer, you often become her closest confidante, observing the way she reacts to and absorbs her surroundings. Her performance is a meticulous depiction of willpower and composure in light of crumbling moral pillars. Through the trajectory of Kim’s experiences, you come to understand her magnetic attraction to the rebellious impulsiveness of Jimmy and her capacity to chart stormy weather when his messes worsen in impact.

The journey of “Better Call Saul” didn’t start with complete knowledge of who Kim really is or who she would become in a Saul-centric world. Seehorn’s ability to step into this setting and build on the character is invaluable to the story. Echoing the effect of Aaron Paul’s performance as Jesse Pinkman in “Breaking Bad” – he’s so good he changed the trajectory of what was initially planned for his character – Kim Wexler wouldn’t exist as she is without Rhea Seehorn. Not a moment of screen time goes by without her bringing extraordinary detail to this character. Kim has always shown fierce determination to make a name for herself in a profession she loves. Always on her game, she usually outthinks her way out of situations without coloring outside the lines of what is right. But as she swiftly discovers, good versus evil and legal versus illegal is not entirely the same game.

Kim’s character being introduced in “Better Call Saul,” having not been included in “Breaking Bad,” must have been an exhilarating challenge. Seehorn more than rises to the occasion. She gives Kim rich subtext and leaves you in a perpetual state of wonder. With each new layer peeled, you fall in love with how well-written the character is and grow increasingly worried for her safety when the stakes continue to rise (reaching ultimate danger in season six). It’s Seehorn’s attention to detail that shapes who Kim is. It’s every shrewd glance, every line drawn in the sand; every moment she shuts Jimmy down in a heartbeat whenever she suspects he has broken the law. Does she know herself well enough to nip Jimmy’s rule-breaking in the bud before she herself can be swayed? Does Kim guilelessly fall off the rails, or is she suppressing dark impulses? Seehorn’s work is full of subtle shifts, tiny moments of greatness that have accumulated to some of the most emotionally charged, devastating scenes in the entire series. She had been on the periphery of awards chatter over the past five seasons. To see her finally receive long-overdue Emmy recognition for the first half of the final season, and considering all the episodes that have aired since her nomination, the honor feels extra justified.

While “Better Call Saul” has received glowing critical acclaim from day one, season six, in particular, is a towering achievement. Masterfully sticking the landing has invited a social outpouring of admiration as more viewers catch up with all the passionate chatter. With that came a whole new level of love for Kim Wexler. Given the final round of Emmy voting is currently underway, the skyrocketing support around Seehorn happened in the nick of time. Please make no mistake, her work has long been admired, but the emotional weight of Kim’s character this season was met with an even more reverberating level of appreciation. While not all eligible at the Emmys this year, her dazzling showcase scenes aired at a prime time for voters to consider just how much of an impact Kim has made on “Better Call Saul.” Seehorn’s Emmy nomination may only be for a select number of episodes in the final season. Still, her vital importance to the series’ success is more recognizable now than ever and I’m sure her nominated co-star Bob Odenkirk would surely agree (don’t worry, we’re rooting for him too). After years of brilliant work, Seehorn is far beyond “welcome to the club” worthy. For Outstanding Supporting Actress in a Drama Series, I implore dear Television Academy voters to “better call Rhea.”

Do you think Rhea Seehorn should win the Emmy this for Outstanding Supporting Actress in a Drama Series? Do you think she’ll win next year instead? What’s your favorite episode that best showcased her talent in the final season of “Better Call Saul?” Please let us know your thoughts in the comments section below or on our Twitter account.