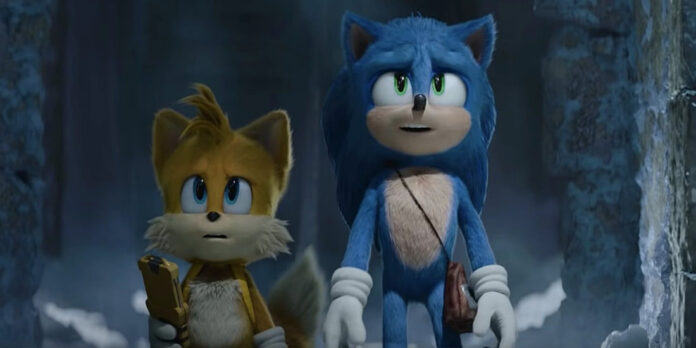 THE STORY – After settling in Green Hills, Sonic is eager to prove that he has what it takes to be a true hero. His test comes when Dr. Robotnik returns with a new partner, Knuckles, in search of a mystical emerald that has the power to destroy civilizations. Sonic teams up with his own sidekick, Tails, and together they embark on a globe-trotting journey to find the Emerald before it falls into the wrong hands.
​
THE CAST – James Marsden, Ben Schwartz, Tika Sumpter, Natasha Rothwell, Adam Pally, Shemar Moore, Colleen O’Shaughnessey, Lee Majdoub, Idris Elba & Jim Carrey

Paramount’s “Sonic The Hedgehog” was a surprising success, even after the pandemic hit its theatrical release. It gave the studio the green light to move forward with a sequel, and thus, we have “Sonic The Hedgehog 2.” The characters you love (or found annoying depending on your feelings towards the first film) are back, along with some new additions, which helps to elevate this sequel slightly above the original. There’s more action, humor, tie-ins to the video games, and more Jim Carrey wackiness to boot. But does more necessarily mean better? In some cases, yes, and in other cases, no.

Following the events of the first film, Dr. Ivo Robotnik (Jim Carrey) is marooned on the mysterious Mushroom Island until suddenly, a portal opens up, and out comes Knuckles (voiced by Idris Elba), an anthropomorphic red echidna warrior who is searching for the Master Emerald, which can put one’s thoughts into action. Looking to settle an old grudge with Longclaw and anyone who gets in his way, Knuckles forms an alliance with Dr. Robotnik in exchange for the Master Emerald and gets him off the Mushroom planet and back to Earth, where Sonic (voiced by Ben Schwartz) is regularly fighting crime at night (calling himself “Blue Justice”) but is not always being the perfect hero he wants to be. His buddy Tom (James Marsden) thinks he’s being too reckless, despite the hedgehog’s good intentions. When Tom and his wife Maddie (Tika Sumpter) leave Seattle for Maddie’s sister (Natasha Rothwell) Rachel’s wedding with her fiancé Randall (Shemar Moore), Dr. Robotnik attacks Sonic along with Knuckles. He is saved by Tails (voiced by Colleen O’Shaughnessey), an anthropomorphic yellow fox who can fly with his two tails. Tails reveal he has been watching Sonic with his self-invented gadgets ever since the first film’s events, and together, the two set off to stop Robotnik and Knuckles from claiming the Master Emerald and become friends in the process.

“Sonic The Hedgehog” has two target audiences: kids and fans of the video game franchise. If you don’t fall into either of those two groups and didn’t enjoy the first film, there’s a good chance “Sonic The Hedgehog 2” will not change your mind. However, if you were even a bit mixed on the last film, “Sonic The Hedgehog 2” could be considered an improvement primarily due to the inclusion of Knuckles and Tails. There’s more focus placed on them and Sonic this time around as opposed to the human characters (and whatever time is spent on the human characters, outside of Jim Carrey, is pretty awfully executed) and the dynamic the three of them create is at times genuinely funny, heartwarming and compelling to watch. The visual effects for each character vary from scene to scene, though they seem to struggle the most when there’s an abundance of light. Take particular notice of the scene with Sonic and Tom in a boat on a lake and how the scene’s lighting highlights the imperfections in Sonic’s fur. But then there will be a visually dazzling and fun sequence such as Sonic snowboarding down a mountain as he avoids Rocotnik’s robots or running across the surface of a large body of water (this movie makes it a plot point to mention Sonic can’t swim) that will counterbalance these imperfections.

Luckily, each of these anthropomorphic characters are brought to vivid life by the vocal performances, making the scenes they share the best of an otherwise silly and inconsistent sequel effort. Jim Carrey is doing a tremendous amount of heavy-lifting once again, delivering a bonkers go-for-broke performance similar to his high-wire energized work in the 90s. You can tell every take of his performance was wildly different from the last, and it’s always refreshing to see Carrey just going for it with 1000% effort, no matter the outcome. I just wish he had better material to work with because frequently, the humor does not land as it should, opting for one too many pop culture references (although, one line, “You’re as useful to me as a backstage pass to Limp Bizkit” got me to laugh pretty hard) and insistently placing a quip on nearly every line of dialogue rather than let the comedy be organic and witty. Although they have reduced screentime, the rest of the human characters suffer the most from the thoughtless writing as the whole Hawaii wedding sequence continues to slow down the film’s momentum with its bland cinematography, overacted hysterics, and nonsensical storytelling.

Clocking in at 122 minutes, “Sonic The Hedgehog 2” is bigger in many ways, but for such an inconsistent film, it would’ve been served better with maybe a 90-100 minute runtime instead. What saves this sequel from being just as bad, if not worse, than its predecessor are the characters Tails and Knuckles and how they interact with Sonic. Particularly, the friendship that forms between Sonic and Tails is quite heartwarming. At the same time, Knuckles adds splashes of humor to his character later in the third act, giving the vengeful character a believable arc that sets him up nicely for future movies. The post-credits scene (after a clever end-credits sequence, which faithfully recreates scenes from the movie using the original SEGA game’s graphics) clearly shows that there will be a third film with another exciting character from the video games to be introduced. Unfortunately, due to Jim Carrey’s recent retirement announcement, this might be the last time we see Dr. Robotnik in these movies. Still, if that means fewer human characters so we can get more of these lovable CGI creatures added to the mix, then I’m all for it.