“FANTASTIC BEASTS: THE SECRETS OF DUMBLEDORE” 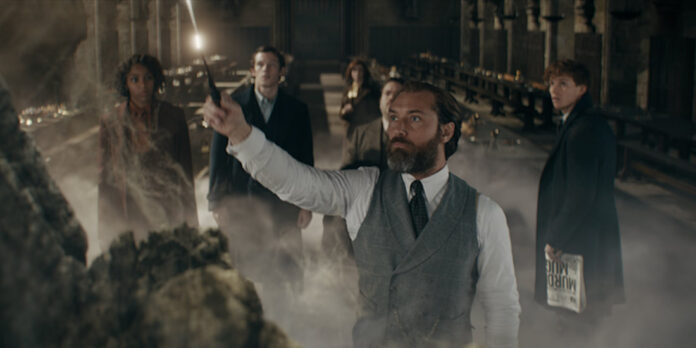 THE STORY – Professor Albus Dumbledore knows the powerful, dark wizard Gellert Grindelwald is moving to seize control of the wizarding world. Unable to stop him alone, he entrusts magizoologist Newt Scamander to lead an intrepid team of wizards and witches. They soon encounter an array of old and new beasts as they clash with Grindelwald’s growing legion of followers.

​It seems destined that beloved properties from youth will never be able to keep their magical grasp on audiences indefinitely. Despite the warm, nostalgic memories these works can produce, the elation can quickly turn sour when the years of uninspired follow-ups seemingly lose sight of what made the original incarnation so special. Many franchises have fallen victim to such methods, chief among them being the “Star Wars” and “The Lord of the Rings” films, which found their inventive wonder squandered by shoddily assembled extensions. The same is true for “Harry Potter,” though this series has an added demerit of toxic authorship. Still, the intention to plot the origins of many characters within this universe has spawned the “Fantastic Beasts” series. The two previous entries left a lot to be desired, leaving room for this newest installment to deliver some kind of improvement. It does manage to accomplish this bare minimum of a task but also struggles to become thoroughly engaging.

The Wizarding World is still struck with uneasy strain as the rise of an antagonistic force threatens peace in both the magical and non-magical realms. Grindelwald (Mads Mikkelsen) is amassing his political power in an effort to become an official leader and sanction his violent conflict. On the other side is Dumbledore (Jude Law), the former friend and lover who cannot physically fight Grindelwald due to a powerful spell. This is why he once again enlists Newt Scamander (Eddie Redmayne) and his compatriots to upend the villainous schemes, with this particular one involving the protection of an enchanted creature that holds the key to Gindelwald’s success. It’s a race against time to ensure the encroaching aura of evil is kept at bay as a significant threat looms large.

What marred both of the predecessors in this new series was an utter lack of intriguing characterization and compelling storytelling to make them worthwhile endeavors. While this film is somewhat an enhancement, it does not create a sense of momentum that keeps one invested. J.K. Rowling is no longer the sole screenwriter here, sharing that credit with longtime “Harry Potter” scribe Steve Kloves. Together, they indulge in a darker tone that establishes the more dangerous stakes at play. Unfortunately, this is buried underneath a plot that moves at a tedious pace thanks to its episodic unfolding. The story itself doesn’t adequately build off its established relationships, and the attempts to expand the mythology of this world are only met with convulsed rules and messy motivations. The political connotations embedded within are shallow observations that mean very little as the film races towards a whimper of a climax. Overall, the screenplay feels like it has a more focused goal than previous pursuits, but the enterprise is still lifeless and tedious.

It’s always been challenging to discuss the directorial sensibilities of these films because ever since David Yates took over the franchise beginning with “Harry Potter and the Order of the Phoenix,” his visual style has not progressed a great deal. Apart from some of the shadowy aesthetics incorporated by Bruno Delbonnel in one of the films, Yates’s approach has been relatively nondescript. There isn’t any real sense of evolution to the filmmaking; it’s never distractingly subpar but never containing any inventiveness either. There are occasional set pieces that establish a more violent atmosphere to the setting, and that is an innovative chapter. At the same time, Yates continues to show that his authorial voice has not expanded in the fifteen years he’s been helming this franchise, not helped by the inconsistent quality of the visual effects. He continues to merely present a competency in crafting a film without any real sense of individuality.

As most of the cast here are returning players, there isn’t much here in terms of performances that stick out from the core group. Redmayne is thankfully not quite as grating as previously seen, but Scamander is still an uninteresting character that he struggles to make more inviting. Dan Fogler, however, does infuse his role with an equal measure of oafish buffoonery and tender emotion that inexplicably works for what is needed, and Law has an effective demeanor that’s endearing if wasted. Much of the new additions don’t make much impact, though Jessica Williams delivers a magnetic screen presence as a new witch. Truly, Mikkelsen is the one exceptional highlight of this ensemble. Replacing Johnny Depp in the role, he brings a level of menace that is captivating to witness, conceiving an evil persona that can quietly realize a great peril. Simply put, he brings real “Hannibal” energy to the screen, and that’s a wonderful addition to break the monotony. It’s a shame that he isn’t accompanied by strong support from the writing, but he absolutely makes this character far more alluring than what’s on the page.

By this point, one will already determine if “Fantastic Beasts: The Secrets of Dumbledore” will be an appealing expedition. While this episode is not as much a chore to endure as the previous one, that does not mean success has been achieved. Yes, the performances feel like a more comfortable fit, with Mikkelsen doing the heavy lifting to construct a beguiling portrait. It is true that the slight shift in tone makes way for set pieces with a denser air of tension. However, none of that forgives the sluggish pace, flat characters, and anonymous direction, all the while being suffocated by stale writing. With every passing moment, it becomes harder to hold onto the magic the “Harry Potter” films inspired, as the subsequent movies and even knowledge about Rowling’s social views come further to light. Perhaps this is a sign of better horizons for the future. Yet, not being as bad as your predecessor does not make for a recommendable experience.