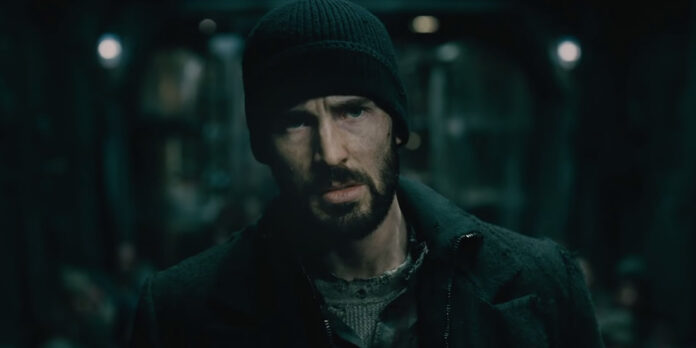 THE STORY – Survivors of Earth’s second Ice Age live out their days on a luxury train that ploughs through snow and ice. The train’s poorest residents, who live in the squalid caboose, plan to improve their lot by taking over the engine room.
​
THE CAST – Chris Evans, Song Kang-ho, Tilda Swinton, Jamie Bell, Octavia Spencer, Ewen Bremner, Ko Asung, John Hurt & Ed Harris

“Snowpiercer” was director Bong Joon-ho’s (“Parasite“) first English language speaking film and was the movie that was supposed to get him on the radar of a more mainstream audience. Starring Captain America himself, Chris Evans, with Oscar winners Octavia Spencer and Tilda Swinton in supporting roles, “Snowpiercer” came soaring in and faced many production issues and delays, mostly due to behind the scenes clashes between producer Harvey Weinstein and Bong. But now, years later, mostly everyone has caught up with Bong Joon-ho’s post-apocalyptic action film and regards it as the unique and inspirational film that it is, even spawning a television series adaptation.

Cw7 has been dispersed into Earth’s atmosphere to prevent global warming. However, it backfires, and the entire Earth over freezes, leaving most living creatures extinct. 17 years later, it’s the year 2031 and whatever is left of humanity is on a train that continuously circles the globe. The population on the train is divided between the poor and deprived in the tail section and the cruel and wealthy at the front. Curtis Everett (Chris Evans) is planning an uprising alongside his mentor Gilliam (John Hurt), after 17 years of abuse and inequality from the front. Alongside his best friend Edgar (Jamie Bell), Tanya (Octavia Spencer) who’s a mother desperate to rescue her son from the front, and a bunch of others, Curtis leads the tail section car by car, against waves of enemies and other unforeseen challenges led by Minister Mason (Tilda Swinton) and the train’s creator Wilford (Ed Harris), who resides in the engine room, the last car of the train. With the help of a kronole (a drug in this universe) addicted father (Song Kang-ho) and his daughter (Go Ah-sung), Curtis manages to get the doors to each train car opened, but the farther he goes, the more the secrets of the train and its purpose are revealed.

What makes “Snowpiercer” stand out amongst other action films of its kind is its sheer originality and vision from Bong Joon-ho. The production design and world-building for “Snowpiercer” is world-class and a brilliant form of storytelling as each new train car is subsequently opened. The colors, feel, and overall design changes every time, making Wilford’s train truly feel like its own fully realized world with variety and a sense of wonder and discovery. Structured almost like a video game, there is a great build of momentum as Curtis pushes forward despite the heavy losses he experiences along the way. The world-building is also not just in the production design and wonderfully contrasted costumes for the tail section and the front. It’s also in the dialogue which is conveyed little by little as the story moves forward. The history of the train is being documented by sketch artists as it is happening and by most accounts, barely any of them can remember their lives before the train existed. As a result, there is 17 years of exposition which has to get communicated to the audience and screenwriting team Bong Joon-ho and Kelly Masterson (“Before The Devil Knows Your Dead”) spread it out so that it is easily digestible and never overwhelming.

The performances in “Snowpiercer” are well rounded with such a diverse cast. The tail section members of the cast are more grounded in their work while the front gets to display over the top eccentricities, once again giving the world of “Snowpiercer” an unusual flavor that doesn’t feel like our world today. Tilda Swinton disappears (as she normally does, so it is) into the role of the Minister, Wilford’s right hand. Donning fake teeth, a bizarre speaking cadence, and a horrible wig, she is a blast to watch in this despite the horror her character inflicts onto the tail section. Chris Evans has honestly never been better than he is as Curtis, a reluctant leader who carries survivor’s guilt with him from years of living on the train. He not only gets to display his physical skills (especially during the hatchet massacre scene over the Yekaterina bridge) but he also receives the opportunity to cover some really dramatically heavy territory that we rarely see him tap into as an actor. His monologue towards the end of the film recounting just how far the tail section will go in order to survive is gut-wrenching and absolutely horrifying. Everyone else contributes nicely in their designated roles (no pun intended), never overshadowing their other castmates and all working cohesively under Bong’s direction to tell this fascinating story.

“Snowpiercer” is many things. It’s an action film. A science-fiction film. A post-apocalyptic film. A film about human survival. It’s about class warfare. It’s also about global warming. Bong Joon-ho is one of the world’s best filmmakers precisely because his films are so multi-faceted. They can never be pegged down. As a result, “Snowpiercer” gives us just enough to make this ingenious world feel fully realized in only two hours. It does this, not just with its story and its aesthetics. But also by engaging our imaginations, allowing us to fill in the blanks and create our own history for the world and for the characters that live in it. I guess that is why a television series, which does have the extended runtime to expand on this world was not a surprise to me when it was first announced. “Snowpiercer” has a lot to offer outside of its genre trappings, because at its core, it reveals to us just what it exactly means to be human.