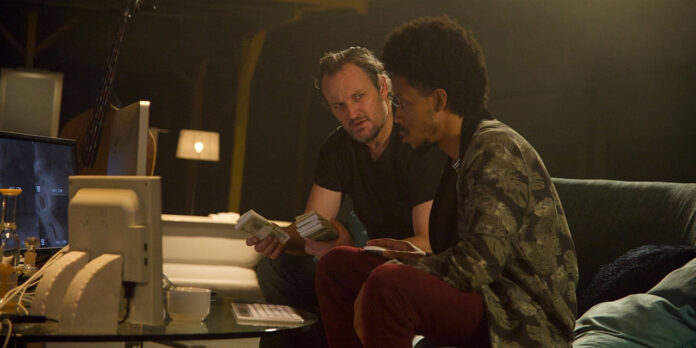 THE STORY – Young, idealistic and driven to succeed, Ross Ulbricht creates Silk Road, the internet’s first unregulated marketplace. When the site becomes a multimillion dollar pipeline for illicit drugs, Ulbricht draws the attention of Rick Bowden, a dangerously unpredictable DEA agent who uses any means necessary to take him down.

There is no shortage of stories in the world that look to pull back the curtain on recent events that may have gone unnoticed but still feel relevant to our times. It’s an opportunity to expose a truth to the world that is a powerfully profound message to convey. The landscape is littered with such tales that are ripe for riveting dramatization and the proper execution can provide an intriguing film to watch. That is no doubt the intention “Silk Road” aims for but it ultimately is a mostly empty exercise that treads on far too familiar tropes without much innovation.

Nick Robinson stars as Ross Ulbricht, one of those typical white twenty-somethings whose intellectual genius has mastered countless arenas but is unsatisfied with what he’s created so far. Ross sees himself as an innovator and is unfulfilled with all the other half-measures he’s taken in life that have yet to determine his sense of purpose. That’s what leads him to create Silk Road, an untraceable online marketplace used to procure illegal substances, mainly drugs. As the site grows and the money rolls in, so does the scrutiny of the federal government. DEA Agent Rick Bowden (Jason Clarke) sets his eyes on this case, traversing this difficult new territory with frustration while creating messes of his own. Stakes only escalate as the two fight for victory by any means necessary.

One can already sense the energized and somewhat irreverent tone the film is going for, embodied right off the bat by the “American Hustle” style disclaimer pertaining to the story’s authenticity. Tiller Russell certainly attempts to maintain that tone throughout but his efforts are generally hollow in terms of one’s investment in this world. There are some fairly well-executed moments of tension to his credit, particularly as the cat-and-mouse chase between the two main characters begins to intensify. However, that mainly appears in the last act and does not compensate for the mundane efforts that proceed most of that switch in focus. The filmmaking is competent but hardly engaging, though the synthy score does a lot of the heavy lifting.

While Russell’s direction is not particularly extraordinary, at least it is not as taxing as his screenplay. The entire structure feels disorienting in its presentation, jetting between storylines in a way that disrupts the rhythm. It’s a constant source of frustration but not as tedious as the plethora of insufferable personalities that fill this story and don’t inspire much empathy. This isn’t to say that an effective story needs likable players. Still, with characters that act on every selfish motivation with a complete lack of self-reflection, it becomes a tiresome experience that makes one disengage from the plot. The absence of any altruism is baked into the narrative but the exploration is shallow and ultimately unfulfilling. The film wants us to see a complicated world filled with bad actors with some good tendencies but none of these characters are interesting enough to justify whatever thematic commentary is provided. They circle around a tale that ends up repetitive and stale by the end.

The actors assembled here are not giving exceptional performances by any stretch but they do manage to embody these roles in an authentic way that’s at least appropriate for this film. Robinson manages to carry himself well enough, even though he is shackled by wooden dialogue, which forces a bland performance. Clarke is an actor who embodies a particular type at this point, and sure enough, his gruff and grizzled persona with softness buried deep inside is shown once again. It’s a role he can do in his sleep but not to the point of being distracting. Neither may be revolutionary but they are serviceable, particularly as the tensions rise as the conclusion approaches. The rest of the supporting cast is utterly wasted, particularly Alexandra Shipp in the thankless role of Ross’s suffering girlfriend. The only bright spot is a brief appearance from Paul Walter Hauser as he brings an off-beat energy that infuses the film with the appropriate amount of entertainment when it’s desperately needed.

By far, the biggest issue that is attributed to “Silk Road” is just how uninspired the execution ends up being. There isn’t much here that is appalling from a storytelling perspective but hardly anything present here elicits any form of a strong opinion. The filmmaking is not inventive but it’s not subpar either. The performances are pretty banal but they also manage to fit the mold of the characters. The screenplay is the major element actively working against this narrative’s success, and it ends up highlighting a derivative premise without intriguing characters or a compelling thematic discussion. It all ends up being quite forgettable, and in a sea of similar stories waiting for their own moment of examination, that is hardly a benefit.