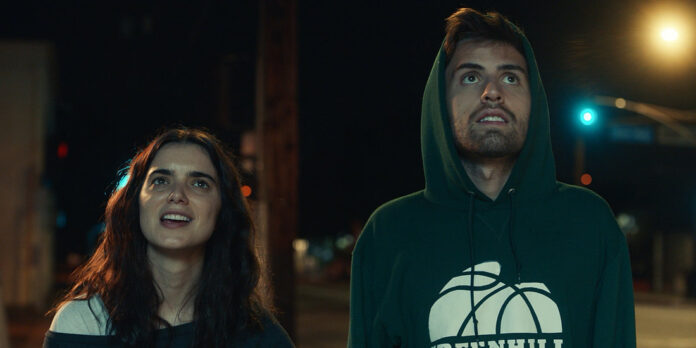 THE STORY – A lonely college freshman forges a strong connection with his resident assistant during a fraternity party.​

​At just 22-years-old, Cooper Raiff won this year’s South By Southwest Grand Jury Prize (Narrative Feature) for his film “Shithouse,” a tale of college student Alex struggling to adjust to life as a freshman. Alex has no friends on campus unless you count his beloved stuffed dog (with whom he communicates). Maybe you could count his hard-partying roommate Sam (Logan Miller), but the two don’t really have much in common. Alex is still tied to life at home in Texas, where he keeps in frequent contact with his mom and sister. Acclimating to college isn’t at all what he expected. One night, he reluctantly agrees to go to a party with Sam at Shithouse. It’s there that he hits it off with his RA, Maggie (Dylan Gelula), a social butterfly who loves college. The two are wildly different but help each other with the highs and lows of the college experience.

Cooper Raiff breaks out with a strong directorial debut that he directed, wrote, produced, edited and stars in the titular role. He balances just the right line of comedy and drama with some moments that feel surprisingly emotional and some that are laugh out loud funny (a particular “13 Going on 30” reference is brilliant). The film has a strong “Before Sunrise” vibe set in a college town as Maggie and Alex spend half of the movie wandering around campus, learning all about each other in just one night. The dialogue is so realistic, witty, and humorous that you can’t help but feel invested in these characters and their lives. What will they do next? Will they end up together? I was captivated by their story from beginning to end.

Cooper Raiff is great as the lead of the film. He embodies the awkward energy that we’ve all experienced in late teens/early twenties. He makes the film feel painfully realistic as Alex deals with heightened anxiety. His presence at the party at “Shithouse” brilliantly captures the awkward feeling of being an invisible presence stuck in the corner at a party. Yet when he gets comfortable with Maggie, it’s a moment of calm. He can exhale because he’s found someone he can talk to that really sees him. Alex struggles with adapting to the next step in life, and Raiff excels in bringing that aspect to the screen. The truth is adapting from high school to college is a tough road for many, and Alex’s journey reflects that realistically.

Dylan Gelula is quick-witted and charismatic as Maggie, with deadpan delivery but just the right comedic timing. On paper, Maggie seems like the polar opposite of Alex. She comes from a divorced family, fears commitment, and loves the college experience. However, the two end up bonding through their past, shared on-campus experience, and uncertainty of the future. Raiff and Gelula’s chemistry is terrific.

Although the title sounds like you’re getting an entirely different kind of movie, “Shithouse” is a “Before Sunrise” style reflection of the college experience. Cooper Raiff’s directorial debut is a heartfelt, honest, and witty coming-of-age film. Don’t miss this one.