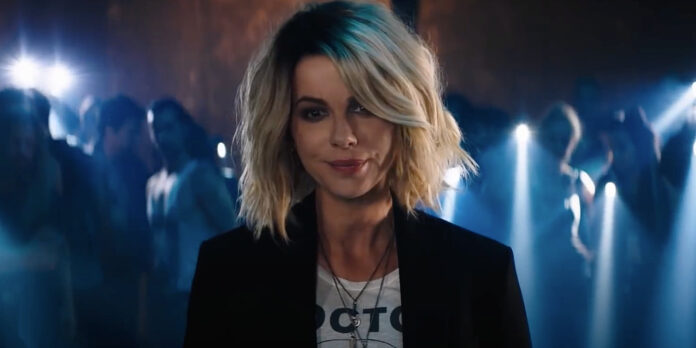 THE STORY – A bouncer with an anger-management problem goes on a revenge-fueled rampage after the murder of a friend.

Tanya Wexler’s “Jolt” might not be a masterpiece, but it sure is fun. The director’s follow-up to “Buffaloed” is about a woman with an anger management disorder who is determined to track down the murderer of her new boyfriend. Though Scott Wascha’s script has some issues and the filming is occasionally messy, the cast is clearly having a great time, and it’s easy to relax into the film and enjoy it.

The film opens with a sequence about Lindy’s (Kate Beckinsale) difficult childhood that has the sheen of a commercial for anti-depression medication, especially because of its dramatic voiceover. (I’m honestly not sure if that’s on purpose or not.) When we flashforward to the present day, Lindy has found a treatment for her intermittent explosive disorder, which causes her to lash out in violence towards people. A breakthrough treatment — a vest that jolts her with electricity when she feels violent ­– ­has allowed her to come out of isolation, and she frequently checks in with Dr. Ivan Munchin (Stanley Tucci) to make sure his invention is still working.

Lindy doesn’t date much, but Justin (Jai Courtney) charms her on a first date, and she immediately becomes protective of him when their waitress mocks his food allergies. However, just as she’s starting to open up to love and her violent impulses are fading, she finds out that he’s been murdered. Despite Detective Nevin (Laverne Cox) and Detective Vicars (Bobby Cannavale) protesting her involvement, she decides to hunt down her boyfriend’s killer herself.

The film has unusual and playful action sequences, particularly the comical effects when Lindy imagines herself causing harm to people, like spurting blood. There are also moments of creative cinematography. It’s refreshing to see a film that doesn’t take itself too seriously, and Beckinsale — in her blonde, rough-edged, English-accented glory — seems to be having a great time. It’s been a while since she’s played a role like this, and she’s a delight, though the character is never given much depth.

The writing ultimately is what fails it with weak character motivations and their underdevelopment. None of the side characters are given much to do, though it’s still a joy to see Tucci onscreen. Much of the plot also hinges on Lindy caring enough about Justin after only two dates to risk everything to track down his killer. The romance is too fast, but at least Lindy herself admits that their relationship was actually in its early stages. This film makes a fatal flaw in how determinedly it attempts to set up a sequel. The last fifteen to twenty minutes is filled with plot twist after plot twist, landing with an ending that feels unfinished. It feels out of line with the pacing of the rest of the film and even a little confusing because of how fast everything happens.

“Jolt” is something a bit different, with a unique approach to its action scenes. It’s nothing extraordinary, but it’s enjoyable to watch, and you can always find appreciation when actors are showing their enjoyment while making it.