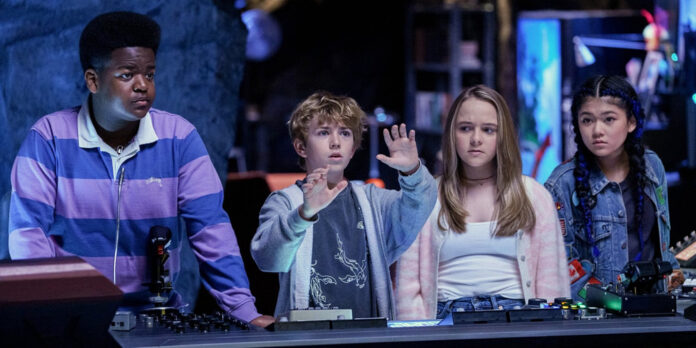 THE STORY – A kid discovers the secret headquarters of a powerful superhero hidden beneath his home and must defend it with his group of friends when villains attack.

​​​Many of us probably grew up thinking our parents/guardians were superheroes. They protected us from harm’s way while sometimes yelling at us for getting in dangerous situations. They definitely could read our minds and always knew what we were up to, especially if it involved something messy. But maybe most importantly, they saved the day when we procrastinated on a school project (sorry, mom). As we grew up, we realized that they aren’t the spandex-wearing superheroes we see in movies, but they’re still extraordinary in their own regard.

But what if that childhood fantasy was actually a reality, and our parents were the people the whole world counted on to keep us safe? Would it be the coolest thing ever or a life filled with so much drama that you couldn’t even wrap your head around? Henry Joost and Ariel Schulman’s “Secret Headquarters” shows that it’s a bit of both, as one teenager discovers his father’s biggest secret in this silly, by-the-numbers superhero tale.

The movie starts off with a strange incident in the woods that draws Jack (Owen Wilson) to a crashed UFO and a mysterious Air Force captain (Jesse Williams). A glowing orb flies into Jack’s hands and chooses him to be The Guardian of the plant. To say it changed his life forever is an understatement, in more ways than none. Though he has a super life, things have been tough between him and his son Charlie (Walker Scobell). The once happy family is now separated and filled with missed baseball games, dreaded birthdays, and lots of last-minute cancellations because of “work.”

When Jack has to run off for another work emergency — Charlie doesn’t know what his dad really does — the 14-year-old decides to call his best friend Berger (Keith L. Williams) over for a “rager.” Brainy Lizzie (Abby James Witherspoon) and Charlie’s longtime crush Maya (Momona Tamada) come along too, and the four have one hell of a night: They discover The Guardian’s lair, filled with all the high-tech gadgets, gizmos, and fanny packs one could dream of. Charlie’s friends all seem to understand that his dad is The Guardian. Still, it’s hard for the teenager to make the connection, especially since he idolizes the superhero for being there for everyone when his own father can’t make it to one of his games. The group later gets themselves in trouble when they attract the attention of evil CEO Ansel Algorn (Michael Peña) and the Air Force Captain, who has been after the glowing orb, known as The Source, for years. What ensues is a classic game of kids vs. adults as they try to outsmart the other and see who will win in the end.

Each of the young actors has a blast in this movie, and who wouldn’t when it comes to superheroes? When they get their hands on The Guardian’s cool technology, it’s cute to see these kids be kids. They fly around with jetpacks, make their heads disappear through a portal, and even find a clever way to cheat on a test and show off at a baseball game (the visual effects are pretty solid in these moments and throughout the film). Scobell, fresh off his “The Adam Project” role, continues on his hero journey and might just be the next young leading man in Hollywood. Williams and Witherspoon have some pretty funny one-liners — particularly a Britney Spears reference — and Tamada is fun to watch as the cool, calm, and collected Maya who makes Scobell’s Charlie adorably nervous. When it comes to the adults, they seem to be having a good time on screen, too, even if their characters are your usual hero vs. villain tropes. Wilson keeps up his usual loveable schtick while Peña gets to flex his bad guy muscles.

There’s nothing new presented with this script compared to any other children’s superhero movie. You have a hero, a villain with his crew after something that the hero has, and a band of children who get themselves into a sticky situation but get to have the last laugh in the end. You’ll be able to see the plot points and ending coming from miles away — even the title reveals a major detail in the movie — but that doesn’t mean young audiences and families won’t enjoy “Secret Headquarters.” There’s humor, even if every joke doesn’t land, kids having a good time and seeing a fantasy that everyone dreams of at least once in their life come true, and sometimes that’s enough for a fun time.