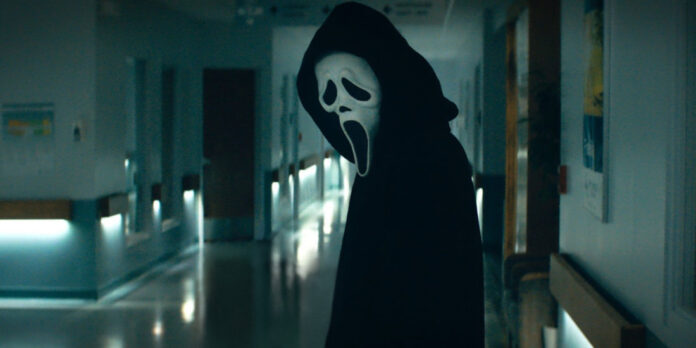 A little over twenty-five years since the original “Scream” was released and eleven years since the premiere of “Scream 4,” the influential horror franchise has returned for a fifth installment, the first not to be directed by original helmer Wes Craven who tragically passed away in 2015 (“Scream 4” would be his final directed film). The Radio Silence team is taking over the reins with Matt Bettinelli-Olpin and Tyler Gillett directing and Chad Villella producing. Their last effort, “Ready or Not,” was well-received by horror fans, but “Scream” is such a beloved franchise with a myriad of devoted fans from all over the world who have shaped their identities through its characters and story. As a result, it’s reasonable to be somewhat doubtful and left wondering if the franchise would be in the right hands for yet another sequel. Just when you thought the franchise had run its course, Bettinelli-Olpin and Gillett, along with screenwriters James Vanderbilt and Guy Busick, decided to do something bold and ingenious: turn the franchise back on its fandom. As the characters in this film proclaim, this isn’t a prequel or a sequel. Instead, it’s a requel. It is a story that connects the subject matter of an earlier film (in this case, the original “Scream“) but is not a remake or a linear continuation of its plot. You need to give the fans what they want, which is something typical but fresh at the same time, and it gives me great pleasure to say that’s precisely what “Scream” is. For lack of a better phrase, it stabs.

A quiet suburban home in the middle of the notorious town of Woodsboro is occupied one evening by teenager Tara Carpenter (Jenna Ortega), all by her lonesome. She answers the phone, thinking it’s her best friend Amber (“Once Upon A Time In Hollywood’s” Mikey Madison), and surprise, surprise, it’s the voice of Ghostface (brought to audible life once again by Roger L. Jackson). She is violently attacked in her home by the unknown masked serial killer, which triggers a response from her older estranged sister Samantha (“In The Heights’s” Melissa Barrera), or Sam, as she prefers to be called by others. Sam has been living her own life away from Woodsboro with her new boyfriend, Richie Kirsch (“The Boys‘” Jack Quaid), for a few years after a terrible secret caused her to separate from her family. Upon returning to Woodsboro, she realizes her hidden past could be the key to the killer’s motives and may help her figure out who is next on their kill list. Sam and Richie reach out to an “expert” on these types of killings: the now-former Sheriff Dewey Riley (David Arquette), who is suffering from nerve damage, living alone, and is a former shell of himself as he watches his ex-wife Gale Weathers (Courteney Cox) on the morning news from his RV trailer. Dewey reaches out to both Gale and Sidney Prescott (Neve Campbell) to warn them that Ghostface has returned, which brings them back to the town where it all started for them. This time there is a whole new generation of kids who, in some cases, are highly acquainted with the “Stab” movies and know where the story might be heading (see Randy Meeks’s niece and nephew Mindy and Chad played by Jasmin Savoy Brown and Mason Gooding respectively) and some who are entirely clueless and prefer “elevated horror” instead (You know, basically A24’s entire horror catalog). Only together can they uncover the mystery of who is behind the white mask this time and why.

It’s awe-inspiring how “Scream” is continually able to stick to what made it a household name in the first place (gnarly kills, a meta affinity for the horror genre, and likable characters) while updating its approach to feel reenergized and new, especially for a 2022 audience who may not be familiarized with the original films and the films which inspired them. “I still prefer the Babadook” proclaims one character, and twenty-five years since the original “Scream” reinvigorated the slasher genre, a lot has changed in terms of the type of stories being told and how. Wes Craven already took a slightly different approach beyond the initial trilogy with the fourth film, which touched on elements of generational legacy, found-footage horror movies, and internet fame. With “Scream” (I really hate that this isn’t just called “Scream 5,” but at least the screenplay makes a joke of it at one point), the topic is all focused on toxic fandom –how fans think they know what is better than the artist themselves because they love these movies (in the “Scream” universe, it’s their love for the “Stab” movies) so much that they’re willing to create their own fanfiction to satisfy their bloodthirsty passion. It’s an innovative and daring approach to take in an age where anyone can take to the internet and angrily voice their displeasure about a star, a filmmaker, a story, or how their favorite character was handled in the latest installment of a franchise they hold near and dear to their hearts. But Radio Silence does not seem to care, and quite frankly, history will likely be on their side when all is said and done. We’ve seen time and time again how toxic fandoms can ruin what was once an enjoyable franchise and turn it into something ugly, and such despicable behavior has rarely ever been called out in the way it’s provoked here in “Scream.”

As mentioned earlier, “Scream” retains the hallmarks that made the franchise endearing to this very day. The kills are some of the most brutal we’ve ever seen from this franchise before, with multiple stab wounds, throat slashings, and, as Dewey rightfully reminds us at one point, gunshots to the head. It’s bloody but never gratuitous in its violence, and it’s all backed by the legendary tongue-in-cheek self-referential humor which gave this franchise its originality for the horror genre. The characters are more self-aware of what kind of situations they’re dealing with than we’ve ever seen before. Dumb decisions (“Don’t split up!” “Don’t go in the basement alone!”) are called out and addressed as the screenplay pays respect to both the new and legacy characters. Seeing Sidney, Gale, and Dewey interacting with each other again after all of these years is a nostalgic joy but what’s more remarkable is how the screenplay provides these characters with commendable material allowing them all to remain faithful to who they are and not throwing in unnecessary twists to subvert our expectations. We’ve lived with the original trio for five films now. If the formula isn’t broken, don’t fix it, and luckily, “Scream” does not even attempt to. Instead, it doubles down on how experienced, badass and formidable the original trio is in the face of such terror. The new cast holds their own as well, with Melissa Barrera, Jenna Ortega, and Jack Quaid each delivering standout performances. Still, truthfully, the entire cast does a fantastic job across the board with not a single low-grade performance amongst the group.

As the camera tracks across the suburban homes, Matt Bettinelli-Olpin and Tyler Gillett know exactly when to turn down the laughs and increase the tension through some thoughtful misdirection of jumpscares (one particular scene of “13 Reasons Why’s” Dylan Minnette preparing dinner for him and his mother, Sherrif Judy Hicks, played by a returning Marley Shelton, is quite clever) and shocking twists. One particular reveal involving Melissa Barrera’s Sam will have audiences discussing furiously for years through various think pieces and heated debates over whether the inclusion of a CGI legacy character and what it means for her character arc was a good decision or not. Suffice to say, it’s clear that this franchise is running out of ways to continue the already concluded story of Sidney Prescott and successfully pass the torch (oh, does that get a memorable and fiery shoutout at one point in the third act) to the next generation. It may have worked with “Scream 4,” and despite all of the reluctance, it managed to work here again, even more so. For as sad as it was not to have Wes Craven back, having a unique set of creatives behind this film, one that mixes the old with the new, was the direction this franchise needed to remain relevant, and honestly, I think he would be proud and for Radio Silence, I’m sure it’s been “an honor” as Ghostface says menacingly to one of the legacy characters at a crucial turning point in the film. There’s a moment where Richie tells Sam as he’s watching the “Stab” movies on Netflix to help him prepare for what they’re about to deal with, “The whole franchise goes off the rails after number 5.” It’s pretty clear the filmmakers are aware that there isn’t anywhere else the story can go from here without altogether redefining itself and starting anew. But who knows? Maybe in another five, eleven, or twenty-five years, the current state of the cinematic horror genre will have changed enough to give Ghostface another reason “to come back to life, for one last scare.”