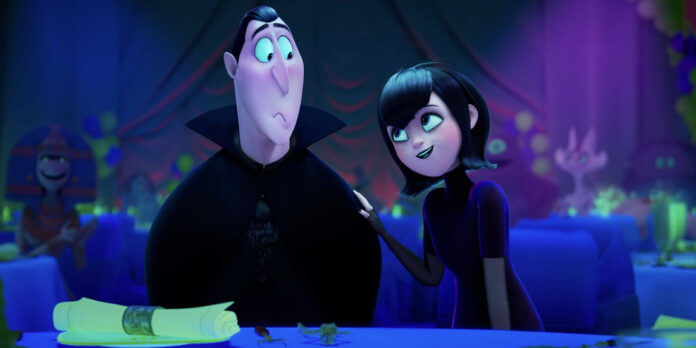 THE STORY – Van Helsing’s mysterious new invention transforms Drac and his pals into humans, and Johnny into a monster. With their new mismatched bodies, Drac and the pack must find a way to switch themselves back before their transformations become permanent.

The youngsters and parents – and animation lovers – who have followed the “Hotel Transylvania” franchise over the course of 10 years have seen it all with this rambunctious group of monsters. Drac (Adam Sandler) lost his marbles when his daughter Mavis (Selena Gomez) fell in love with a human; he feared that his grandson wouldn’t have a little monster in him, and they all even went on a family vacation with high stakes. Even though audiences have had fun along the way, it’s time to say goodbye to the gang with “Hotel Transylvania: Transformania.” While there are new ideas at play, unfortunately, it’s not a very memorable closing chapter.

The gang is back for another adventure, only this time, things aren’t quite the same. Drac (voiced by Brian Hull and not Sandler) is ready to retire and hand over the business to Mavis (Selena Gomez) and Johnny (Andy Samberg), but after seeing how Johnny almost destroyed the whole place during an anniversary party, Drac’s not too confident in the decision. Johnny, who has never truly felt like part of Drac’s family, believes that the biggest issue is the fact that he’s a human, so with the help of Van Helsing’s (Jim Gaffigan) mysterious invention, the “Monsterification Ray,” Johnny gets monsterfied. Of course, things don’t go according to plan, and Drac and the pack – Wayne (Steve Buscemi), Griffin the Invisible Man (David Spade), Murray (Keegan-Michael Key), and Frank (Brad Abrell) – accidentally get turned into humans themselves. In their new mismatched bodies, Drac, a powerless, not-very-sleek human, and Johnny, a green dragon, fly across the world to find a cure and switch themselves back before their transformations become permanent and before Mavis and Ericka (Kathryn Hahn) – the monster hunter turned Drac lover from “Hotel Transylvania 3: Summer Vacation” – find out.

This one feels the dullest and formulaic among all of the “Hotel Transylvania” installments. Once the first 20 minutes pass by, it’s easy to see where this movie is going: Drac and Johnny will be forced to spend a lot of time together, they’ll bond, and Drac will finally recognize his faults. There’s really not a lot of creativity going on with the plot, aside from the changes among the characters – highlights are human Frank’s constant duck lip selfies and Griffin the Invisible Man’s wardrobe malfunctions. It’s obvious that the series has met its end, and the novelty factor has worn off by this point. Getting a series such as “Toy Story” that builds on itself and only gets better with each film (although some might disagree with the fourth film) is rare, so it’s not disastrous that “Hotel Transylvania” didn’t completely stick the landing. But young children who watch the fourth installment will still learn a valuable life lesson: you’re perfect just the way you are, and you don’t need to change yourself to gain approval from others.

This is the first “Hotel Transylvania” film to be headed by someone other than Sandler – it’s still unknown why he was not involved with the project, but you probably won’t notice the difference unless you’re listening very closely. Hull does a great job of keeping Drac’s iconic accent while adding a touch of something new to his human persona. The rest of the squad brings a familiar comfort level to their characters and remains as goofy as they have in the past. With this story focused on the next generation, it’s nice to have Gomez and Samberg take more of a front seat role and lead adventures of their own. Overall, all four of these films are easy to jump into even if you haven’t seen the previous ones, so people of all ages will be able to have fun with this installment (seeing Drac go through human problems, like the worst plane ride ever, is ultra relatable).

“Hotel Transylvania: Transformania” isn’t a mind-blowing fourth installment, but it leads to a natural conclusion for our favorite monster pals. With Mavis and Johnny growing into their own and taking charge, it seems like a proper send-off for youngsters, too, who have watched these movies over ten years and are ready to move on to the new phases of their lives. While they might not see what the future has in store for the hotel, hopefully, they remember the lessons they’ve learned along the way: be true to yourself, follow your heart, don’t judge others before you get to know them, and always stay weird.