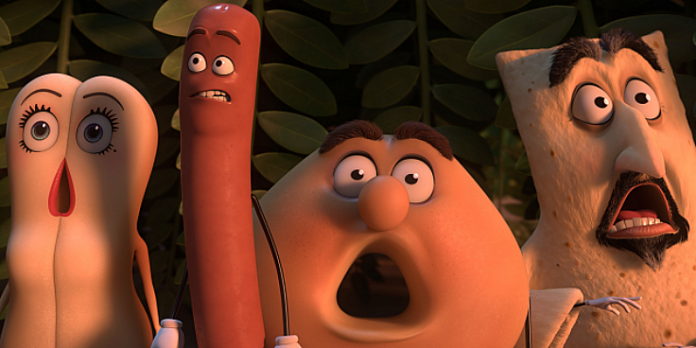 ​There’s no easy way to say this so I’ll just come right out and say it….”Sausage Party” is one f****d up movie. It currently stands as the most offensive, ludicrous and outrageous animated film I have seen since Matt Stone and Trey Parker’s puppet film “Team America: World Police.” “Sausage Party” may stumble a bit in its first two-thirds but the final act of the film and it’s surprising thematic complexity regarding stereotypes, religion and our different beliefs towards the afterlife makes for one memorable experience that is sure to not be forgotten anytime soon.

Every morning at the local supermarket, the food all wake-up and sing a happy song (Written by the great Alan Menken) about how one day the Gods (Humans) will take them beyond the doors of the supermarket and into the great beyond where they are destined to be with them forever in peace and harmony. However, a sausage named Frank (Seth Rogen) learns the horrifying truth that beyond the doors, the Gods will inevitably murder the food for their own consumption. Desperate for his life and the lives of his girlfriend, a pair of hot dog buns named Brenda (Kristen Wiig), he sets off to warn the other foods about the truth. The other foods such as Sammy Bagel Jr. (Edward Norton), Kareem Abdul Lavash (David Krumholtz), and a deformed sausage named Barry (Michael Cera) believe him as they are a diverse group with their own set ideas of what will take place once they leave the supermarket.

The animation within “Sausage Party” is nothing to write home about. However, when an animated film is packed to the brim with the thematic ideas that can challenge Pixar for their storytelling ability, the film might as well be sketched on a piece of paper. Story is king within a film and “Sausage Party” boasts a clever idea (Food being alive, with thoughts, goals, and emotions) backed by the world’s different viewpoints towards our purpose on earth and the afterlife, thus making for a film which has unexpected depth despite all of the raunchy humor contained within. The jokes themselves are flat for the most part. Once the “one joke” mentality of the food being alive wears off, writers Seth Rogen and co. resort to mindless cursing for a response from the viewer which is when I feared that the film would lose me completely. And then the third act came.

It is best to go into the final act of this movie without any idea of what is coming because even if someone tells you about it, you’ll probably find it hard to believe them and I cannot blame you. The final 20 minutes of “Sausage Party” pushes the boundaries of what is possible in an animated film (Or live action for that matter) and still manages to snag its R-Rating instead of being slapped with an NC-17. I have to commend the filmmakers for having the balls to so explicitly show us what they believe to be is the true meaning of why we are on this earth. It’s insane. It’ll make your jaw drop the floor. And it all makes sense.

Despite the lazy crude humor within the first two-thirds, the voice cast is stellar and boasts a tremendous amount of talent. Seth Rogen conveys the same lovable humor and warmth he brings to his live action roles. Kristen Wiig is quirky and emits a ton of spunk as Brenda Bunson. Edward Norton does an incredible Woody Allen impression as a Jewish bagel. But for me, its Nick Kroll as Douche (Yup, that’s not only his name but the object he is portraying as well) who gives the most memorable voiceover performance as an over the top meat head type who concludes nearly every sentence with bro. His energy and asinine attitude makes his dialogue the most quotable and memorable within the film. There are a lot of other voice talents who come and go within the film such as James Franco who has a brief scene as a human on bath salts, Danny McBride as the crazed Honey Mustard and Bill Hader who has four different roles. Everyone is terrific and brings their comedic talents to the table.

“Sausage Party” is unlike any other film I have ever seen before. It will most likely offend and shock you to some degree or another. I must say with emphasis that you SHOULD NOT take your kids to see this film. Despite the cute character animations, the colorful world, and bubbly personalities, this is the “Deadpool” of animated movies. The third act alone is the most over the top (Yet hysterical) piece of cinema I have seen this year which makes the humor and ridiculousness of “Swiss Army Man” look like child’s play. For this portion of the movie alone, I am rewarding “Sausage Party” an extra half a star as I still feel that the first two-thirds are a bit messy in its execution despite the excellent voice acting from everyone involved and surprisingly deep message on modern day religion. Bet you didn’t see that one coming. But that is the joy of “Sausage Party.” It’s full of surprises. Just don’t say I didn’t warn you.