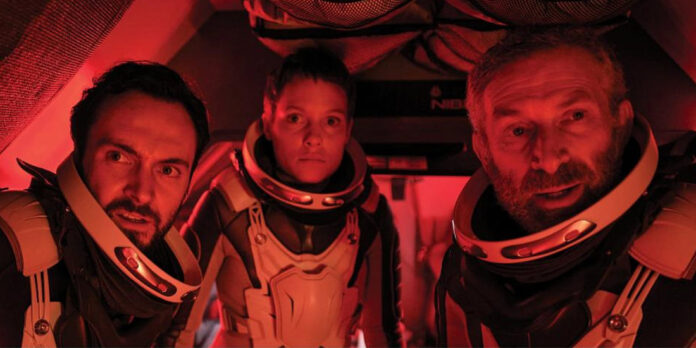 THE STORY – Following a catastrophe on Earth, the planet is covered in a toxic fog. The crew in the space station, must decide whether to risk their lives to get home and search for survivors, or stay safe in the station’s “algae symbiosis system.”​
​
THE CAST – Julia Franz Richter, George Blagden & Mark Ivanir

​​​​When thrillers toss their characters into the vastness of space, oftentimes, the smart thing to do is to scale things down. From “2001: A Space Odyssey” all the way up to “Gravity,” many movies that are set off-planet have wisely used a small cast to tell their story. This juxtaposition of a minuscule human presence facing the endless vacuum of the universe is usually an efficient way to turn conflicts that are literally otherworldly into something surprisingly relatable; everyone can sympathize with a character up against an indomitable force, especially when they have little help from their fellow man. “Rubikon,” the new film from director Magdalena Lauritsch, does just that, locking three people inside a space station and sticking to them for most of the runtime. Unfortunately, the drama they find themselves encountering is not nearly engaging enough and often leaves the audience feeling as if they, too, are floating aimlessly through space.

Set in the fast-approaching future of 2056, the film follows a trio of crewmembers (Julia Franz Richter, George Blagden, and Mark Ivanir) who are stuck on the space station Rubikon. A sudden cloud of toxic pollution has enveloped the Earth, ostensibly ending life on their home planet. Trapped in their celestial prison, the three astronauts have nothing to do but wait, as their lives are made possible by a symbiotic algae that provides them with oxygen. But when a distress call is discovered, they must face the question of whether or not they should venture to their old terrestrial home to attempt to rescue those who remain.

At the start, the film’s premise intrigues. Only a few years removed from the present day, the world as depicted in “Rubikon” has changed completely. All countries have been dissolved, and the Earth’s power now belongs to corporations and their ruthless CEOs. As such, the general attitude of most of the characters is one of resigned apathy. This mood even permeates when disaster strikes, as if the awful world in which the characters live has prepared them always to expect the worst and not to be surprised when it actually occurs. And while this directing choice makes some logical sense, it can make the film feel airless. Rather than coming across as a searing critique of the direction in which our current existence seems to be heading, the film is mired in hopelessness in a way that exhausts rather than captivates.

Further distancing the audience is the specifics of the astronauts’ mission. The screenplay is filled with hastily tossed-off technical jargon and complicated scientific schemes. At a certain point, it’s easy to get lost in the complications of just what exactly the characters are hoping to achieve moment to moment. Notably, the film’s best part occurs shortly after the trio has become resigned to their fate and spend their days on the spaceship watching movies, drinking, and falling in love. This return to basic human activity is a welcome reprieve from the serious-yet-dull energy of all that comes before it and, regrettably, shortly after.

Still, not all is misery in the world-above-the-world of “Rubikon.” The design of the titular space station, while not necessarily being anything particularly new for sci-fi films, is stylish and well-constructed. And Blagden turns in a magnetic performance as the harried Gavin. He’s appropriately stressed in certain dire moments and finds surprising charisma in his character’s anxieties. But these factors can’t support a film that otherwise struggles to totally lift off and launch itself into a dynamic orbit of dramatic storytelling.