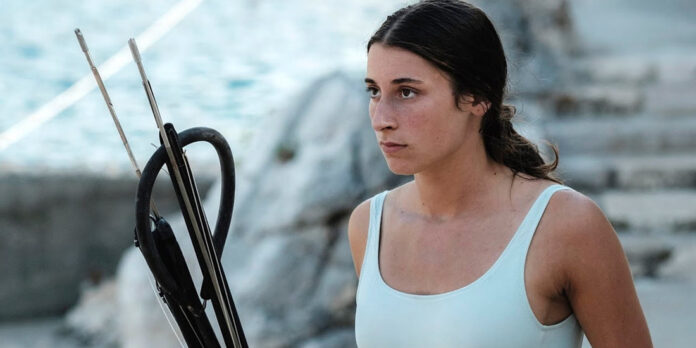 THE STORY – Tensions rise between restless teenager Julija and her oppressive father Ante when an old family friend arrives at their Croatian island home.

​​​Anyone who grew up in the Balkan region or has family from that part of the world will recognize the familial relationships at play in Antoneta Alamat Kusijanović’s “Murina.” There is such tension between Julija (Gracija Filipović) and her father Ante (Leon Lucev) that they rarely share a kind word with each other. At the same time, the teenager is much warmer with her mother, Nela (Danica Čurčić), although Ante’s domineering reign affects their bond too. That toxic masculinity and chauvinism are so deeply rooted in Balkan society that most people just learn to live with it. Still, Julija doesn’t want to give up her ambitions or a better life for herself as she thinks her mother did.

Those tensions cloud every picturesque moment in Kusijanović’s Camera d’Or-winning film as the director juxtaposes the stunning Croatian coast with the anger and violence found behind closed doors. Julija faces hurtful words, physical assaults, and a will to leave her life behind, and when a familiar face stays at her family’s home for a few days, that desire grows even more in this coming-of-age drama.

Julija spends her days spearfishing for sharp-toothed moray eel – called murina in Croatian – with her father. The sea is a sort of refuge for her – she can escape her father’s domineering ways for some time, although she can’t feel entirely at ease in the water. At one point, she says she doesn’t like to swim in areas where she doesn’t know what’s under her, and there’s certainly plenty of danger lurking in these waters. But the hypnotic and dreamy blues of the sea – shot beautifully by Hélène Louvart – help her feel free when otherwise she’s expected to follow and listen to whatever her father says. Though she finds ways to rebel at times – huffing about having to go spearfishing or generally not wanting to do tasks that her father assigns – she knows what is waiting for her if she doesn’t.

The tension only grows more when her father’s longtime friend Javier (Cliff Curtis), who also has a romantic history with Nela, arrives. Ante is trying to sell some land to his friend, which would allow the family to move to the capital in Zagreb. Ante sees money signs whenever he looks at Javier, but Julija considers a different kind of potential. Knowing the past between him and her mother, she can’t help but scold Nela over the life she could have lived if she married Javier instead of Ante. Julija, in a sense, begins to encourage her mother to return to him because she sees him as an escape from her father and her miserable life.

Once this realization comes to her, the film really picks up and makes audiences wonder just how far things will go. But as Julija is at odds with the life around her, Ante becomes even more of a terror. In one scene, as the group is heading to one of the plots of land Ante wants to sell, he wants to go through a rocky area even though Julija advises him it won’t be safe due to the low tide. After he clears the area, he pushes her overboard for doubting him. Later on, as she puts on her mother’s beautiful, red velvet dress – essentially to impress Javier – Ante knocks down her confidence in an instant when he tells her she has boy’s shoulders. That constant back and forth between father and daughter is captured brilliantly by Filipović and Lucev. She always looks like she’s on the verge of exploding, while he is a literal firecracker set off by anything she does, and it’s scary to see what that anger can do. Čurčić also wonderfully showcases a mother who wants to protect her daughter but doesn’t know exactly how due to her husband’s controlling nature.

There are parts in the middle where the film begins to lose steam, but it roars back for an explosive third act filled with even more shocking moments. The drama builds to a jaw-dropping underwater finale that will make you literally hold your breath. Once again, Louvart expertly captures a tranquil landscape both above and below water, but Kusijanović shows that there are more than just sea creatures to worry about in the deep blue.