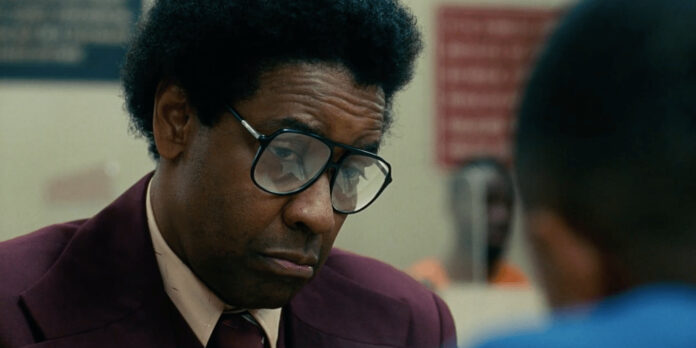 THE STORY – Roman J. Israel, Esq. is set in the underbelly of the overburdened Los Angeles criminal court system. Denzel Washington stars as a driven, idealistic defense attorney whose life is upended when his mentor, a civil rights icon, dies. When he is recruited to join a firm led by one of the legendary man’s former students – the ambitious lawyer George Pierce (Colin Farrell) – and begins a friendship with a young champion of equal rights (Carmen Ejogo), a turbulent series of events ensue that will put the activism that has defined Roman’s career to the test.

​The opening voiceover of the film “Roman J. Israel, Esq.” (Still one of the worst film titles of the year) tells us that in three weeks time, Roman will be a filing a case against himself and defending himself, for his own disbarment from the law. What happens over the course of those three weeks leading up to this moment is the story of “Roman J. Israel, Esq.” After coming off of the critically acclaimed and much beloved “Nightcrawler,” Dan Gilroy had some very high expectations to meet. While the reactions coming out of this year’s Toronto Film Festival would lead you to believe that “Roman J. Israel, Esq.” is a complete disaster, some extra time in the editing room has resulted in a clearer, more concise film with a strong performance from Denzel Washington that could be labeled as a disappointment at best. It’s nothing special, nor is it anything memorable, but it’s not atrocious either.

Set in Los Angeles, Roman Israel (Denzel Washington) is a civil rights lawyer who works mostly behind the scenes at the office for his partner, mentor, and the owner of their law firm: William Henry Jackson. When a heart attack renders Mr. Jackson incapable to run the office, Roman suddenly finds himself without a job. Due to his lifelong commitment to being an activist and a beacon of hope for those who need it, Roman’s financial life is practically non-existent as he has always chosen to not work for the larger law firms such as the ones run by George Pierce (Colin Farrell), another lawyer who looked up to Mr. Jackson and extends an offer to Roman to offer him a job at his own firm. Roman takes pride in his work and declines the offer, instead choosing to seek employment from the National Assembly Of Civil Rights run by Maya (Carmen Ejogo). When his financial situation worsens, Roman, a man who has never once received a break in his life, is suddenly offered another opportunity, one that should he take it, will start a chain of consequences that could lead him to a better life, but at a price.

After seeing that opening, it works as the perfect hook for an audience who very much loves and knows who Denzel Washington is. One of the last true movie stars of our time, audiences not only relate to Denzel but they understand the types of characters he tends to play: good-hearted, complex individuals. Outside of the occasional full-blown villain (“Training Day”), Denzel is easily able to make us root for his characters, mostly because he is Denzel Washington and his decade’s amounts of work speak for itself. In “Roman J. Israel, Esq.” I would not say his performance is one of his best but it is surely one of his most unique. Playing a much more sensitive, frail and insecure type of persona who’s only strength and confidence comes from his knowledge of the law itself, Roman Israel is a righteous man who is fighting the good fight in a world that is too cynical and dark for his idealism.

Gilroy’s themes that he is getting at in “Roman J. Israel, Esq.” are certainly profound and interesting enough to keep us along for the ride (But let’s be clear, most of the reason why this film barely survives is because of Denzel). The film is mostly about circumstance. It is because of the circumstances surrounding one’s arrest, that determines how the law can either help you or hurt you. It is because of circumstance, that Roman is forced into making a decision that goes against everything he believes in. He concludes that purity cannot survive in this world but whether or not we are supposed to agree with that is irrelevant. After exploring similar themes set in Los Angeles in “Nightcrawler,” Gilroy’s screenplay gets murky here with a questionable third act conclusion to Roman’s actions that leaves us wondering what Gilroy’s stance on his own screenplay’s themes really is.

There are moments of comedy in “Roman J. Israel, Esq.” that comes from Washington’s innate ability to charm us and make us care for the characters he is portraying on screen. We enjoy his success, we feel for his low points and we fear for him in all the right places. I’ve heard many people complain that there is a tonal imbalance with “Roman J. Israel, Esq.” but after finally seeing the film myself, I believe that to eliminate the lighter moments of the script would’ve resulted in a much more dour film with not as many redeeming opportunities for Denzel to find nuance with the character. Gilroy’s film is filled with a lot of virtuous lines of dialogue (Some involving the details and intricacies of the law, that those without law degrees with certainly find hard to follow) about the nature of good and evil, injustice and man’s own flaws. These moments may come off as unbelievable, that anyone could be saying those things within the real world but Roman Israel is a larger than life character who, for all his quirks (Doesn’t drive a car, loves his iPod classic, prefers paper to a computer) comes to life for us due to Denzel Washington. “Roman J. Israel, Esq.” is not a perfect movie by any means. It has its fair share of problems and maybe my expectations were so low that it had the advantage to impress me. While I can say the film never impressed me outside of Denzel Washington, “Roman J. Israel, Esq.” is certainly worth a look. Just don’t expect anything as impressive as “Nightcrawler.”

Powered by JustWatch
Share
Facebook
Twitter
Copy URL
Previous articleSurveying The Oscar Field – Who Is Still In The Hunt For The Best Actress Oscar This Year?
Next article“Justice League” And The Difficulty Of Shared Universes