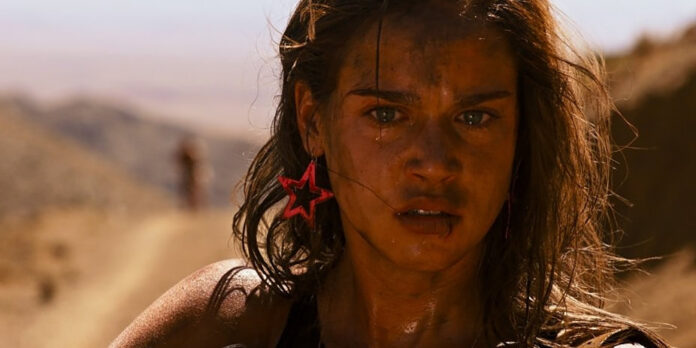 THE STORY – Jen is enjoying a romantic getaway with her wealthy boyfriend — until his two sleazy friends arrive for an unannounced hunting trip. As tension mounts in the house, the situation abruptly and viciously intensifies, culminating in a shocking act that leaves Jen left for dead. Unfortunately for her assailants, she survives and soon begins a relentless quest for bloody revenge.
​
THE CAST – Matilda Lutz, Kevin Janssens, Vincent Colombe & Guillaume Bouchède

​​Actions speak louder than words, and Coralie Fargeat ensures that with her debut thriller “Revenge,” the actions are what we’ll remember. Though this could be considered a French film, the dialogue is subpar compared to the visceral and brutal physicalities, both from the performers and the camera. “Revenge” will grab your preconceived notions of nudity, horror, and damsels by the throat and wring them out to dry. This film is not for the faint of heart, but it is a testament to the female perspective— a woman’s version of “Inglourious Basterds” where the worst case scenario becomes the winning, albeit untrue, hand.

Set in an expansive desert wasteland, “Revenge” is aptly named. Hot pink manicured and vivacious Jen (Matilda Lutz) and her married lover Richard (Kevin Janssens) arrive via helicopter to his mod vacation home, complete with a reflective pool and neon-colored glass window panes. All is going well until the unexpected arrival of Richard’s two churning and cloddish friends, Stan (Vincent Columbe) and Dimitri (Guillaume Bouchède). They have a fun evening of dancing and conversation, and all three men are enraptured by Jen’s sexuality and confidence. The next morning, Jen is left alone with Richard’s friends, and Stan commits a heinous act. When Richard doesn’t react the way Jen expects, she ultimately runs for her life across the desert as the three men follow in pursuit. As the situation intensifies, a shocking event leaves Jen near-death and out-of-options, except for one: revenge.

Saturated with succulent, punky attitude and unapologetic sensuality, “Revenge” is the kind of gut-punch thriller-western that feminist dreams are made of. Cinematographer Robrecht Heyvaert utilized experimental techniques to highlight the film’s brutal and sexual juxtapositions— from kissing sequences that transition to moonlit backdrops, to splashes of blood falling on a lone ant as well as one of the most disgusting chocolate gummy bear eating scenes ever filmed, “Revenge” is psychedelic in nature. It’s also bloodier than most American cinematic endeavors, which shouldn’t come as a surprise to the French horror cinema virtuoso. However, while the gore could be considered its own character, it doesn’t detract from the film’s symbolism and depth. The special effects associated with pulling shards of glass out of feet or gouging out eyes looks amateur at best, but it still carries with it warranted reactions of unease and discomfort. Indeed, writer/director Coralie Fargeat wants to make you feel many things, but comfortable is not one of them. She has created a visceral world full of high-powered action sequences and bloodied battlefronts doused in thematic messages of gender roles, power plays, and the horror genre in its entirety. With the 108 minutes allotted to her, Fargeat manages to give a middle finger to all the demoralizing and overly-sexualized horror films of past generations by creating one of her own and inverting every necessary element.

Take nudity, for example. Regardless of whether the film is mainstream or underground, the horror genre is flooded with female nudity. Usually, this nudity is associated with a terrified and naked woman trying and failing, to escape her assailant. Many genres, but especially horror, correlate female nudity with weakness and vulnerability. On the contrary, “Revenge” exemplifies what it means for a woman to be proud of her body. When Matilda Lutz’s Jen first meets Stan and Dimitri, she’s minimally clothed. Despite this, she isn’t embarrassed or weakened by her lack of clothing; rather, she’s empowered and controls that moment. This theme of inverted nudity becomes especially rewarding by the film’s end, when one of Jen’s assailants finds himself bloodied, nude, and, ultimately, weak— a cutthroat finger-point at the ridiculous nature of nudity expressed in many horror films.

“Revenge” is a steroid-induced kick to the face and helmed by the ferocious Matilda Lutz, it packs a heavy punch. Lutz is fearless as Jen, the wronged and revengeful protagonist. She fully commits to her character, evidenced with full-body physicalities and pointed expressions. The most incredible aspect of Lutz’s scrappy Jen, though, is the power she possesses on screen with so little dialogue to back it up. She speaks less than any of the other three actors for the film’s duration, yet is riveting to watch as she literally picks herself up from the brink of death and fights her way to unadulterated justice. She doesn’t need the last word; she “just wants to go home.” In fact, Fargeat’s script is mostly used to enhance the boorish tonalities of Jen’s assailants. Vincent Columbe, Guillaume Bouchède, and Kevin Janssens are crass and easily despised as Stan, Dimitri, and Richard, respectively. Dirty, uncouth, and seething with lust-thirsty misogyny, the men in “Revenge” are scary not because they’re powerful, but because they’re so reminiscent of the real men who terrorize women on a daily basis, from microaggressions in the workplace to college dorm room rape.

This gets to the heart of “Revenge,” which serves as an anthem for any harassed or demoralized women who didn’t get the ending they wanted and deserved. However, the body of “Revenge” is saved for the horror hungry fans, and you, too, will get what you want. A full-throttle adrenaline rush and violent shock to the senses, “Revenge” is an astonishing ride that will leave your body sore from tension by its bloody and rectified end.