Reactions To The 2022 Tony Awards 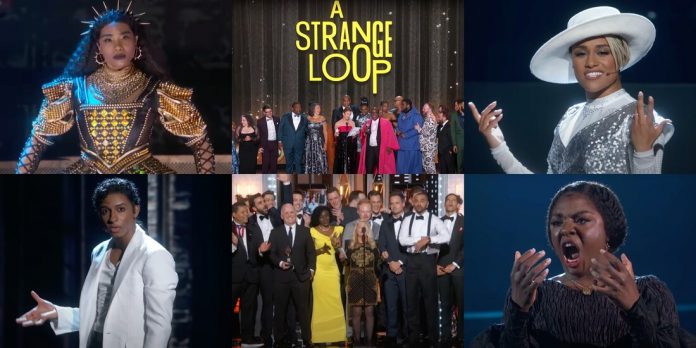 After over a year of Broadway being dark, Broadway is back in full swing. The 2021-2022 season brought life back to the Great White Way with several revivals and new productions. Following last year’s Tony Awards, where there were only a handful of eligible performances and shows due to the halted season from the COVID-19 pandemic, this season provided the theater audiences (and Tony voters) with a vast array of shows.

On June 12, 2022, Academy Award Winner Ariana DeBose returned to New York City and Radio City Music Hall as host for the 75th Annual Tony Awards. For a full list of last night’s winners, you can read them here. But for now, let’s break down the significant events that occurred in celebrating all things Broadway.

Swing Appreciation
Even though Broadway is officially open and is safe for theatergoers to attend a show in an enclosed space, COVID-19 is still prominent. With cast and crew members getting tested multiple times a day, it was not uncommon when a principal actor had to call out sick with the virus. But as the famous saying goes, “The show must go on,” and thankfully, the understudies and swings of Broadway were ready at a moment’s notice, some even returning to productions for a show or two. Tony Award Nominee and Host Ariana DeBose, who began her career on Broadway as an understudy, took a moment to single out the incredible work swings and understudies have done this season to keep the lights of Broadway on. She even took a few moments out of the show to signal out Mallory Maedke, who stepped in when “Six” original cast member Abby Mueller could not perform due to testing positive for COVID-19.

Jennifer Hudson Achieves EGOT Status
With the “A Strange Loop” winning the prestigious Best Musical award, Jennifer Hudson officially claimed her EGOT status as a producer of the musical. Hudson is the 17th artist to win a competitive EGOT – a recipient of an Emmy, Grammy, Oscar, and Tony Award – and is the second Black woman to enter this elite club. “A Strange Loop” earned 11 Tony nominations and won Best Book of a Musical as well.

The Bio-Musical Holds Strong
The Best Actor in a Musical category has caused a massive debate this Tony season. There were strong paths for Jaquel Spivey of “A Strange Loop” and Myles Frost of “MJ.” But it turned out that Frost of “MJ” took the prize. Even though Spivey was the fresh face of the Tony season, having recently graduated from college and making his Broadway debut with “A Strange Loop,” the production overall underperformed at the Tonys by winning only two awards. With Frost’s win and the success of “MJ” altogether, It seems that the American Theater Wing is still attracted to Juicebox biographical musicals, much like Jessie Mueller, Adrienne Warren, and Stephanie J. Blocks’ successes in “Beautiful: The Carole King Musical,” “Tina,” and “The Cher Show” respectfully.

Company Wins Big
After a successful West End production, which resulted in three Laurence Olivier Awards, the gender-flipped revival of Stephen Sondheim’s “Company” received five Tony Awards, including Best Performance by a Featured Actress in a Musical (Patti LuPone), Best Performance by a Featured Actor in a Musical (Matt Doyle), Best Direction of a Musical (Marianne Elliott), and Best Revival of a Musical. In addition, Marianne Elliott is now the first woman to have won a Tony Award in both directing categories, and LuPone and Doyle are the production’s first acting wins ever (crazy, I know).

Broadway Plays Tribute To Stephen Sondheim
The Broadway community lost a massive giant when Stephen Sondheim passed away in November of 2021. Lin-Manuel Miranda opened the homage by stating how he was and still is an inspiration for the future artists of Broadway. He then turned to Sondheim’s longtime collaborator Bernadette Peters, who sang the iconic song “Children Will Listen” from “Into the Woods.” The performance was intercut with interview segments of Sondheim throughout his career, which was a beautiful and touching tribute to the late composer and songwriter.

Deirdre O’Connell Shocks In Best Actress In A Play
Best Actress in a Play was another crowded category of the night. But even with a category as competitive as this one, it seemed like Mary-Louise Parker, who was reprising (20 years later) her leading role in “How I Learn to Drive,” was going to take the Tony home. But it was Deirdre O’Connell of “Dana H.” who prevailed. Even with an extensive career in film and television, this was O’Connell’s first Tony nomination (and win). She enthusiastically accepted her award with some inspiration for the young artists watching at home, “make the weird art.”

Joaquina Kalukango
Joaquina Kalukango won her first Tony Award tonight for Best Actress in a Musical for her performance in “Paradise Square.” And she proved it when she performed with her company on the Radio City stage. Standing center stage with just a spotlight, Kalukango belted “Let it Burn,” which took the audience, both in and out of the theater, by storm that it immediately received a standing ovation.

What was your favorite win, speech, moment and musical number from last night’s Tony Awards? Please let us know your thoughts in the comments section below or on our Twitter account, and be sure to listen to the Next Best Theatre team’s reaction to the show on the podcast, which will be going up tomorrow.