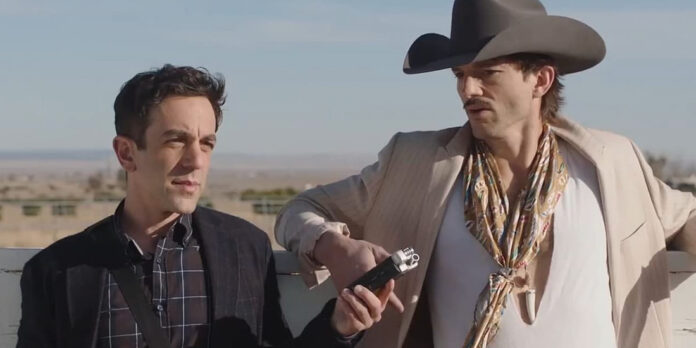 THE STORY – A journalist and podcaster travels from New York City to Texas to investigate the death of a woman whom he hooked up with.
​
THE CAST – B. J. Novak, Boyd Holbrook, J. Smith-Cameron, Dove Cameron, Issa Rae & Ashton Kutcher

6/13/2022
​By Matt Neglia
​
After making his name on the Emmy Award-winning comedy series “The Office” as a writer, actor, director, and executive producer, B.J. Novak is finally taking all of those talents and putting them into a single film that is serving as his feature directorial debut. Upon first glance, “Vengeance” may seem like a typical comedy-thriller in the vein of the Coen Bros. with its rural Texas setting, quirky characters, and crime mystery plot. However, as the protagonist goes deeper into his investigation of what may or may not be a conspiracy murder, Novak plunges us deeper into the darker underbelly of our country’s views and theories on disassociation in the age of social media and the cultural divide that exists between the left and the right.

“Vengeance” opens up with Ben Manalowtiz (B.J. Novak) at a rooftop party in New York City, discussing with a friend how it is better to have options in life when it comes to dating women and how that is the way we live our lives in the digital age now. He’s an east coast intellectual working for the New Yorker as a journalist and podcaster who can make a story out of almost anything. Despite being bright and perceptive, his revolving door of various romantic interests (he has multiple women listed is his phone based on how they met or where they’re from rather than their actual names) makes him a flawed and shallow character, especially when he receives an unexpected late-night call from Ty Shaw (Boyd Holbrook) informing Ben about the death of his sister Abby (played in archival video footage by Lio Tipton) due to an opioid overdose. Ty and the rest of his family believe Ben had a more serious relationship with Abby, whereas to Ben, Abby was just another one of many women he was hooking up with. Guilted into attending her funeral in deep West Texas (this isn’t the cities of Houston or Austin), he meets Abby’s mother, Sharon (J. Smith-Cameron), and sisters, Kansas City (Dove Cameron) and Paris (Isabella Amara). It’s all painfully awkward, but Ben gets through it until Ty suggests that maybe his sister, who was known never to do drugs, didn’t overdose at all, and perhaps, she was murdered. By who? Who knows! What is this hunch based on? Absolutely nothing other than Ty’s gut instinct. The facts don’t matter, though, for the world is unjust, someone is in pain, and someone needs to be blamed, so Ty proposes to Ben that they avenge her death. Realizing there’s a story about the far right’s refusal to accept the painful truth which is being presented in front of them and instead choosing to seek vengeance and craft a conspiracy out of nothing, Ben calls his editor, Eloise (Issa Rae), to turn the story into a true-crime podcast. As he starts interviewing members of Abby’s family and the town locals, including a charismatic music producer (Ashton Kutcher), Ben’s preconceived notions of everyone he meets and motivation aren’t so much about uncovering the truth or the many lies which surround this mystery, but simply finding and telling a good story.

A thematically ambitious screenplay that cuts deep to the heart of many issues plaguing the country to this day on how disconnected we are from each other and reality itself, B.J. Novak’s writing is the film’s most significant asset. His characters are all so well-defined by their environments and viewpoints of the world, especially Kutcher’s Quentin Sellers, with his alluring confidence and smooth-talking relaxed demeanor. It would be easy to trivialize these characters as stereotypes and render them utterly meaningless, but Novak is much more insightful in the way he tackles the comedy of his story (especially its darker elements), crafting an at times absurd but always honestly rooted story populated by personalities which are understandable in their motivations if one would only take the time to listen to them. As Quentin tells Ben at one point, “The problem isn’t that these people aren’t smart. The problem is that they are.” While there are those who come from different parts of the country who might feel almost foreign to us in their ways of life, behavior, and decision-making process, they are still entrenched in the same world as us but with one specific difference: a lack of options. Thus, lives turn to drugs, crime, and conspiracy theories, and with them comes regret, anger, and a strong desire to make things right.

While immense credit should be given to Novak’s screenplay for asking and attempting to answer such large questions, his directing, unfortunately, leaves a bit more to be desired. He manages to get terrific performances from his entire cast, including himself, as they all have to walk a tight rope of dark humor and aching drama, all the while not offending anyone in the process with their red vs. blue state portrayals. The comedy, in particular, leaps off the page wonderfully, creating a broadly entertaining film offering a sharp critique of American theories, ideas, and people. It’s not that Novak is necessarily lacking talent behind the camera. However, there doesn’t seem to be a visual artist there either, one who could command the frame and stand out amongst a sea of other directors who would’ve given this material a more singular identity.

Novak has delivered an engaging comedy-crime thriller for his feature directorial debut that investigates the truth, lies, and the myths we create about American citizens through our preconceived notions of how the other half of the country lives. It’s rich in its setting, characters, dialogue, and ideas. It may not all come together for everyone to create a fully satisfying whole. Still, the cerebral ambition is to be respected even if Novak’s directing isn’t up to the challenge of matching his brilliant screenplay. These are incredibly challenging topics to analyze and convey faithfully in an effort to push conversations and people’s way of thinking forward in the hope of a better understanding of why our country is as socially messed up today as it is. For those looking for such a dense and stimulating story, like the West Texas fast-food chain restaurant Abby’s family adores, Whataburger, “Vengeance” is right there for consumption.