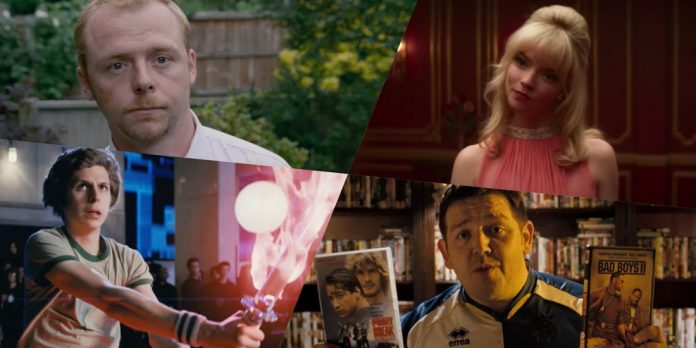 There’s nobody quite like Edgar Wright. As a technician and a visual storyteller, Wright has cultivated a style resulting in some of the most irreverent and clever comedies of the millennium. He may be second to Quentin Tarantino in terms of cataloging obscure film references, but unlike Tarantino, he invites the audience to laugh at them and share in their inherent silliness.

There’s more to Wright than satire, however. He’s proven himself to be a master documentarian and a filmmaker who’s constantly looking to up the ante in terms of form and aesthetic. “Last Night in Soho” is Wright’s latest and most uncharacteristic release. Given the buzz surrounding it, we decided to pull out our collections and determine which Wright films we love most and which ones we’d consider chucking at heads of nearby zombies.

Here is Next Best Picture’s ranking of Edgar Wright’s films, from worst to best.​..

The most notable aspect of Wright’s debut film is that it’s never gotten a proper commercial release. “A Fistful of Fingers” was shot on the cheap in 1995, with the title referencing Sergio Leone’s “Man with No Name” trilogy. There are some imaginative sight gags and pun names, though perhaps with more of a nod to the sillier “Naked Gun” style of parody than the clinical wit that Wright would go on to perfect.

Several gags fall flat, though, whether it be due to poor delivery or awkward framing on the part of Wright. In this regard, it’s an interesting look at a filmmaker who was still finding himself behind the camera. This is more of a completist piece than a proper debut (especially given its bootleg status), but it’s still worth mentioning as the first color on the larger Wright canvas.

“Last Night in Soho” had a deafening buzz on the strength of its aesthetic and its time-hopping mystery. Wright looked as though he would break away from the comedic underpinnings of his earlier works and attempt something more ambitious, at least in terms of dramatic depth. The first half of “Last Night in Soho” achieves these goals to varying degrees, especially when it comes to its seductive critique of blind nostalgia.

Where things fall apart is in the back half. The villain, designed as a takedown of toxic men, feels one-dimensional to the point of unbelievable. The twist ending meant to thread the decade-spanning plot can be seen coming a mile away. There are pleasures to be had in “Last Night in Soho,” but they don’t amount to a satisfying whole.

Wright is best known for his “Three Flavors Cornetto” trilogy, though the trilogy’s legacy primarily rests on the first two installments. The third film, “The World’s End,” is the undisputed black sheep, a comedy that has lots going for it but underachieves compared to its older siblings.

“The World’s End” boasts a hilarious ensemble and some top-notch Wright humor, but the attempts to tinker with the formula of the first two films (Simon Pegg and Nick Frost swap their usual roles as straight man and buffoon, respectively) work better on paper than they do in execution. The alien invasion parody element also cuts a little too close to the setting of “Shaun of the Dead” to register as wholly original.

“Baby Driver” was another departure for Wright. It gave the director a chance to riff on the getaway car subgenre that was kickstarted by one of his favorite films, “The Driver.” As both a parody and a tribute, “Baby Driver” showcases Wright at the top of his game, churning out thrilling chase scenes with a surgeon-like precision that incorporates sound effects and the pop songs being listened to by the titular character (Ansel Elgort).

Now your mileage may vary depending on your feelings towards the cast (the inclusion of Elgort and Kevin Spacey has hurt the enjoyability of the film for many). Still, there are enough twists and turns to keep this heist-comedy feeling sharp no matter how many times you take it for a spin.

“Hot Fuzz” is quintessential Wright. It’s a hilarious sendup of action movie tropes that doubles as a slick vehicle for Pegg & Frost’s comedic antics. Frequently there are multiple verbal and visual gags happening in the same frame simultaneously, making it nearly impossible to catch all the witticisms in one viewing.

The ongoing debate among Cornetto fans is whether “Shaun of the Dead” or “Hot Fuzz” is the better film, but if we had to put our two cents in, we’d say the overreliance on pop culture references in “Hot Fuzz” (“Point Break,” “Bad Boys II” and “Supercop” are just some of the films mentioned by name) knocks it down a peg(g). Still an incredible time, though.

Wright dropped two films in 2021, and the less conventional one turned out to be the standout. “The Sparks Brothers” is a documentary focusing on the career of the band Sparks and the struggles that brothers Ron and Russell Mael had in keeping the band’s musical integrity intact.

The documentary is overflowing with the eccentricities and personalities of its subject matter, which Wright gleefully explores through animated segues and clever integration of footage. It’s as lively a documentary as you’ll see all year, and given the buzz it’s generated around the Sparks, it gives us all hope that Wright will continue to flex his artistic muscles in the nonfiction arena.

If ever a movie were destined to be a cult classic. “Scott Pilgrim vs. the World” is an absolute delight, not only as a detailed adaptation of a graphic novel but as a giddy, colorful world unto itself. The film was Wright’s most ambitious to date at the time of its release, and it’s a testament to his talents that he rose to the challenge and elevated the material further than any of his Hollywood peers could have.

On top of being wildly quotable and packed with future stars (Aubrey Plaza, Chris Evans, Brie Larson, Kieran Culkin, Anna Kendrick, etc.), “Scott Pilgrim” thrives on Wright’s ability to juggle whiplash-inducing sight gags/editing without undermining the dramatic beats at the heart of the story. It remains one of the director’s most rewarding films to rewatch.

“Shaun of the Dead” will always be Wright’s defining film. It was his second crack at a “debut” after “A Fistful of Fingers” was shelved, and he made it count, melding intelligence and moviemaking savvy with a keen eye for comedy. From the opening scene, it’s evident that we’re watching a master at work, carefully orchestrating framing, delivery, and editing to squeeze the most out of a comedic situation.

Simon Pegg and Nick Frost have always been Wright’s most notable muses, and their ability to tap into the broad yet biting humor of the director’s world makes their synergy undeniable. “Shaun of the Dead” is both a horror and comedy classic, and given how well it holds up, we don’t see that changing anytime soon.

Which is your favorite Edgar Wright film? Have you seen “Last Night in Soho” yet? If so, what did you think? Let us know in the comments section below or on our Twitter account.