Ranking All Of The Spider-Man Films 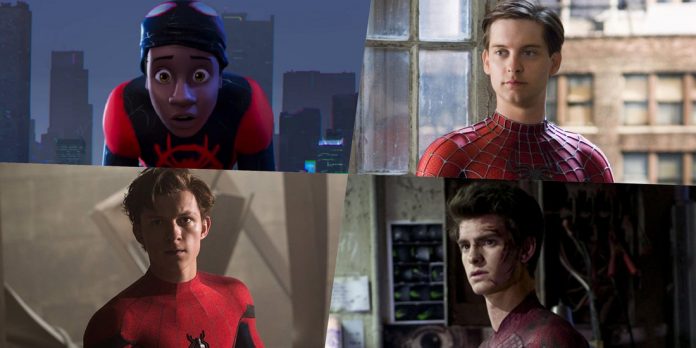 ​Spider-Man has been the most cinematically saturated superhero of the 21st century. He’s had three live-action franchises and an Oscar-winning animated blockbuster (with a sequel on the way). Even his villains, be they Venom or Morbius, are getting their own films. The fact that moviegoers haven’t tired of the web slinger’s antics is a testament to his lasting appeal. He is, with few challengers, the most beloved hero to come out of Marvel’s legendary stable.

“Spider-Man: No Way Home” is now in theaters, and given that the film has been promoted as a nod to the franchises that came before, we thought it the perfect time to look back and rank each installment, from worst to best. Feel free to pull up a web, hang out, and discover where your favorite Spidey adventure winds up!

We all saw this one coming. The errors of “The Amazing Spider-Man” are dialed up to eleven with “The Amazing Spider-Man 2”, courtesy of a scattershot plot, too much exposition, and so many villains that none of them wind up being memorable (at least, in a positive manner). Andrew Garfield and Emma Stone’s chemistry comes dangerously close to being overly cutesy here, and given that they were the saving grace of the previous film, it’s basically a death knell.

Jamie Foxx is aggressively bad as Electro, Dane DeHaan is in another world entirely as the Green Goblin, and Paul Giamatti hits a career-low with his abhorrent Rhino cameo (what a waste of talent). “The Amazing Spider-Man 2” is a textbook example of a sequel that’s so eager to set up future installments that it forgets to be entertaining on its own. “Spider-Man 3” is so-bad-it’s-good, but this one is so-bad-it’s-bad.

Baffling choices abound here. Sam Raimi has been blunt about his frustrations making “Spider-Man 3” and how he was forced to incorporate Venom at the behest of producers. Be that as it may, he leaned into some of his worst filmmaking tendencies and rolled out a sequel that was awkward as it was inconsistent. “Spider-Man 3” is all over the place, throttling between bleak character study and nonsensical farce without so much as a pause to process it all.

Maguire’s shortcomings as an actor really shine through here, as he’s given some truly insipid dialogue (and er, dances) to perform. James Franco and Kirsten Dunst are whittled down to caricatures, and while Thomas Hayden Church is genuinely good as Sandman, he’s forced to take a backseat to Emo Peter and Imitation Peter (Topher Grace’s overly-smug Eddie Brock). It’s entertaining in a so-bad-it’s-good way, but that still means it’s terrible.

Okay, this is where the installments start to really slide in quality. “The Amazing Spider-Man” franchise seems to be the clear punching bag of Spidey’s cinematic legacy, and it’s easy to see why. It’s not that the plot choices for the first film are ridiculous or outright wrong (though much of these critiques would be valid with the sequel); it’s just that the 2012 reboot is, well, bland.

Marc Webb is a solid indie director, though it’s evident that his taste for blockbuster mayhem is nowhere near as refined as his talent for capturing interpersonal dynamics. The relationship between Peter Parker (Garfield) and Gwen Stacy (Stone) is the most distinct element “The Amazing Spider-Man” has going for it, and it keeps things mostly afloat. Given that they’re two of the best actors to participate in these films, it’s a shame they weren’t given more exciting things to do.

“Spider-Man: Far from Home,” like its predecessor, had a mountain of expectation to shoulder. It was the first MCU release after the colossal “Avengers: Endgame,” and its big brother franchise unavoidably overshadowed it. There’s lots to like about “Spider-Man: Far from Home,” be it the handling of Tony Stark’s legacy, the sleight of hand performance by Jake Gyllenhaal, or the chemistry between Tom Holland’s Spidey and Zendaya’s MJ.

Still, there’s something about the film that keeps it from reaching the heights of “Spider-Man: Homecoming.” There’s an attempt to create a pseudo-mentor dynamic with Spidey and Gyllenhaal’s Mysterio, but the latter’s transparency makes the villain twist a bit too predictable. They never reach the palpable intensity of Spider-Man and the Vulture from the first film, even if the final reveal is one for the ages. A solid, if minor installment.

While it falls short of the dizzying heights of originality that “Spider-Man: Into the Spider-Verse” provided, “Spider-Man: No Way Home” manages to be a satisfying conclusion to the MCU trilogy and a love letter to the Spidey iterations that came before it. Some of the plotting is spotty, and there are lines of dialogue that are better left on the cutting room floor or on the internet as memes.

If you’re willing to overlook these blemishes, however, and take “Spider-Man: No Way Home” as an emotionally charged piece of blockbuster entertainment, then it’s a blast. Holland gives his finest performance as the titular web-slinger. Without giving too much away, the chemistry he has with the rest of the interdimensional cast is so enjoyable that one can’t help but be won over. If only all fan service were this good.

The one that started it all, in more ways than one. “Spider-Man” laid the foundation for so much of what we now recognize as the modern superhero template, and it does so with a giddy energy that manages to overcome the dated CG and structural shortcomings (the timid narration did not age well). Raimi’s alternating origin story approach to Peter (Tobey Maguire) and the Green Goblin (Willem Dafoe) trims any potential fat from the runtime, and the latter’s scenery-chewing performance has been catnip for multiple generations of Spidey fans.

That’s not even getting into the triumphant Danny Elfman score, the Bruce Campbell and Randy Savage cameos, or the climactic fight scene, which still ranks among the most brutal and intense in any superhero film. “Spider-Man” was a watershed moment for fans, and it’s a testament to its sturdy construction that it still holds up today.

“Spider-Man: Into the Spider-Verse” was the first web-slinger film since 2002 to have an element of genuine surprise. Nobody quite knew whether the complex, seemingly infinite roster of Spidey variants would be too much for a mainstream audience. Still, directors Bob Persichetti, Peter Ramsey, and Rodney Rothman managed to churn out what many consider to be an all-time release in the genre.

The film manages to juggle a Murderers’ Row of voice actors (Shameik Moore, Jake Johnson, Nicolas Cage, Hailee Steinfeld), but it filters a heartwarming story of family and heroism through a kaleidoscopic animation style. It shatters the preconceived notion of what a Spider-Man story can be, and we couldn’t be more thankful for it.

“Spider-Man: Homecoming” has pressure coming from every direction. It needed to sustain the continued success of the MCU while at the same time justifying its existence in a Hollywood that had already seen two Spidey franchises in ten years. Miraculously, director Jon Watt and company managed to do just that, offering up a relatable and refreshingly low-stakes version of the character.

Holland is a delight as the titular hero, striking the perfect balance between youthfulness (he’s the only Spidey actor who’s legitimately passed for a teen) and tenaciousness. His aspiration for mythic heroism clashes beautifully with Michael Keaton’s blue-collar villain, the Vulture. The car scene, where a stupefied Vulture discovers Peter’s true identity, is among the best scenes in the entire MCU. It’s here, with a grown man threatening to take the life of his daughter’s prom date, that the vulnerability of the Spider-Man character is realized to its fullest potential.

“Spider-Man 2” achieved what few superhero sequels managed to do before, and that is to improve upon the themes and concepts of the original. Years before “The Dark Knight” (2008) and “Captain America: The Winter Soldier” (2014) were breaking new ground and refining superhero tropes, the second Spidey film gave fans a surprisingly focused character study of Peter Parker as a man torn between ordinary desires and extraordinary responsibilities.

The film features way more Peter than Spider-Man, which would be an issue were it not for the memorable, painfully human flourishes of director Sam Raimi. In a day and age where ironclad formula has taken hold in Hollywood, it’s a delight to see something as idiosyncratic as the “Evil Dead”-esque reveal of Doctor Octopus (Alfred Molina) or the now-iconic subway chase, where New York denizens promise to conceal the web-slinger’s secret identity. A seminal superhero release.

Which is your favorite Spider-Man film? Have you seen “Spider-Man: No Way Home” yet? If so, what did you think? Let us know in the comments section below or on our Twitter account.