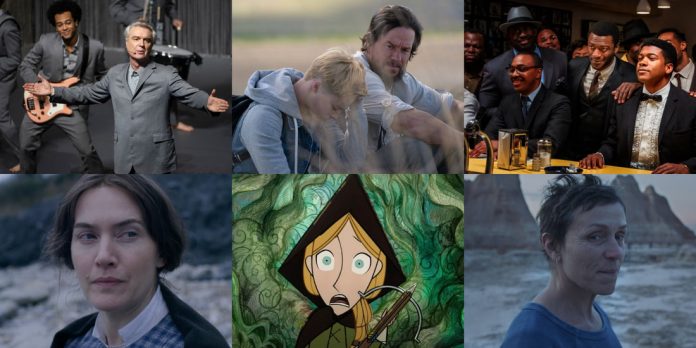 By Dan Bayer
​
The Toronto International Film Festival has become one of the most popular places for Oscar hopefuls to make their presence known. Since 2007, only one of Oscar’s Best Picture winners did not play at TIFF: Alejandro González Iñárritu’s “Birdman.” So, with great anticipation, the film world waited to hear how Artistic Director Cameron Bailey and Executive Director Joana Vicente would make the festival happen amidst a global pandemic that has seen the cancelation of the venerable Cannes Film Festival as well as the Telluride Film Festival. The announcement that the festival would happen locally in Toronto alongside a digital component was met with skepticism, especially with a sparse lineup of premieres that include Thomas Vinterberg’s “Another Round,” a reunion with his “The Hunt” star Mads Mikkelsen; Halle Berry’s directorial debut, “Bruised”; and Francis Lee’s Oscar hopeful, “Ammonite,” starring Kate Winslet and Saoirse Ronan as lesbian lovers. Speculation abounded as to how digital screenings would work, how Press & Industry screenings would work, and what other big films Bailey, Vicente, and their team of Ambassadors could get. The announcement that the amount of accredited press would be severely reduced from normal years also raised quite a few eyebrows.

​I will be attending TIFF for the second year in a row for NBP, from the comfort of my apartment in New York City. I’m excited. Why? Well, mostly because I won’t have to worry about running between theaters to make the next can’t-miss screening. On a more serious note, we know that the films that are screening digitally will be available to watch for 48 hours after they premiere, which will give plenty of time to watch, contemplate, and write about the films I get to see. And while the slate is smaller than usual, that means that if something I wasn’t planning on seeing gets a lot of buzz online, I will actually be able to squeeze it in and see what everyone has been talking about. Unfortunately, some of the higher-profile films, like “Ammonite” and the Anthony Hopkins starring stage adaptation “The Father,” have already been announced as only playing in theaters in Toronto, which is disappointing. But good on TIFF for not forcing filmmakers to make their films available digitally. The filmmakers know the risks of gathering in a theater to watch films, but if TIFF is taking the proper precautions, and they feel strongly about their work needing to be seen on a big screen, they have every right to have their films only shown that way.

But more than any of that, this year’s slate of films actually looks interesting. It may lack the star power of previous TIFF slates, but it makes up for that with the diversity of stories being told, some of which look legitimately fascinating. There are, of course, the remarkably timely documentaries: Frederick Wiseman’s “City Hall” (which, at 275 minutes, I could never fit into my screening schedule onsite, but in this digital age, it might be possible) sees the legendary filmmaker taking his probing eye to Boston’s city government in 2019; “76 Days,” about the outbreak of COVID-19 in Wuhan, China; “MLK/FBI,” an investigation into the U.S. government’s surveillance and harassment of civil rights activist Martin Luther King, Jr.; “No Ordinary Man,” which brings the words of trans jazz musician Billy Tipton to life through a group of contemporary trans performers; and “Notturno,” the latest from “Fire at Sea” director Gianfranco Rosi, shot over two years in communities in the war-torn Middle Eastern region around Syria, Iraq, Kurdistan, and Lebanon.

I’m also looking forward to the latest from several big international directors. The prolific François Ozon is offering his latest, “Summer of 85,” which looks like a more melodramatic, French spin on “Call Me By Your Name.” Japan’s Naomi Kawase has a literary adaptation, “True Mothers,” about a young family who adopted a son after discovering they were infertile, and the young mother who comes back looking for her baby. It looks like a real tear-jerker. Jia Zhangke’s assistant director, Wang Jing, is bringing his first solo film to TIFF. “The Best Is Yet to Come” is a true-life drama about a young journalist who discovers the trafficking of forged health certificates for Hepatitis B carriers at a time when people still believed the virus could be easily spread in public spaces. The director of the Un Certain Regard winner “White God,” Kornél Mundruczó, is back with his first North American film, “Pieces of a Woman,” which stars Vanessa Kirby, Shia LaBeouf, and Ellen Burstyn in a story of a couple who lose a child at birth. Kirby’s star has been rising in the years since “The Crown” – could this be something that lands her in the awards conversation?

Speaking of which, this year’s slate isn’t completely absent of intriguing, star-led American films. Reinaldo Marcus Green’s second narrative feature, “Good Joe Bell,” stars Mark Wahlberg, Connie Britton, and Gary Sinise, and was written by Larry McMurtry and Diana Ossana, the team behind “Brokeback Mountain.” The true story of a man’s man who undergoes a change as his son becomes a victim of horrible bullying seems like a narrative this team could elevate into something truly special. Spike Lee went back to Broadway to film “David Byrne’s American Utopia,” the festival’s Opening Night selection. If it is as dynamic as his take on “Passing Strange,” a similarly unconventional music-based production, then we could be in for something very special. Ricky Staub’s “Concrete Cowboy” stars Idris Elba, Caleb McLaughlin, and Jharrel Jerome – an exciting cast. What’s more exciting is the film’s look at the Black urban cowboys of Philadelphia, a subculture rarely, if ever, seen on film. TIFF also boasts the premiere of Oscar winner Regina King’s directorial debut, “One Night in Miami…” based on Kemp Powers’ play about a 1964 meeting between Malcolm X, Muhammad Ali, Sam Cooke, and Jim Brown. Could the role of the flashy Sam Cooke spell awards success for “Hamilton” Tony winner Leslie Odom, Jr.? There was also the recent announcement that TIFF would screen the directorial debut from David Oyelowo. “The Water Man” is being billed as a “mystical adventure that recalls the beloved family-friendly films of the 1980s,” which at any rate will make it stand out amongst the very adult films that typically populate the festival circuit.

And then, of course, there are new discoveries to be made. Whether it’s the plot, the cast, or the preview images, there’s something intriguing about these under-the-radar selections. Roseanne Liang landed Chloë Grace Moretz to star in her “Shadow in the Cloud,” a Midnight Madness selection about a WWII pilot trying to convince the rest of the all-male crew about an unexpected, sinister presence in their B-17 Flying Fortress. Emma Seligman’s “Shiva Baby,” an expansion of her short that played at TIFF last year, is a cringe comedy about a young Jewish woman dragged by her parents to a shiva call that threatens to expose her many secrets as well as those around her. Being Jewish, this already sounds like something I can relate to. The team behind the gorgeous “The Secret of Kells” and “Song of the Sea” are back with another piece of Irish magic called “Wolfwalkers” about the friendship between two girls in 17th century Ireland. “Get the Hell Out,” another Midnight Madness selection, is a martial arts-infused horror-comedy about a virus outbreak that turns the politicians of Taiwan’s parliament into mutant zombies. It includes “gory slapstick, satirical sing-alongs, and hilarious, fourth-wall-shattering graphics” and likened to the films of Stephen Chow, which just sounds like a lot of my favorite things. Naomi Watts stars in the true-life story “Penguin Bloom” about a woman who suffers a traumatic injury and only starts coming back to life when her family takes in a stray magpie. The part sounds like awards bait, and the supporting cast includes Andrew Lincoln, Jacki Weaver, and Rachel House. There’s also “Bandar Band,” a road movie from Iranian director Manijeh Hekmat that follows a band through the flooded roadways in Iran on their day-long trip to play at a battle of the bands in Tehran. The imagery looks stunning and the trailer has an intriguing mystery to it that makes me even more interested.

There are also plenty of intriguing-looking shorts as well as television series, including Mira Nair’s latest, “A Suitable Boy”; “The Third Day,” a mysterious-sounding project which stars Jude Law and Naomie Harris; “Trickster,” an adaptation of Eden Robinson’s novel about an Indigenous teen whose difficult home life becomes even more difficult when talking ravens, shapeshifters, and other magical, mythological visions start showing up. There’s something to fill every taste at TIFF this year, just as in every year. The fact that it’s a smaller slate than usual only means that we will be able to soak up more of it. And even though the experience won’t be the same as last year, when I was able to travel to Toronto and enjoy the city as well as the films, I’m still looking forward to it.

What are you most looking forward to in this year’s lineup? Anything you’d specifically like to hear our take on? Let us know in the comments section below or on our Twitter account.