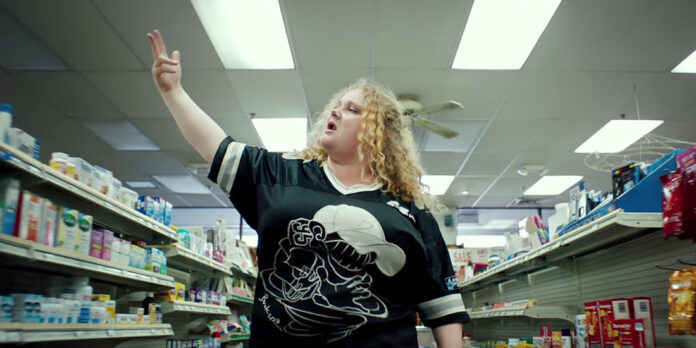 THE STORYFed up with life in her New Jersey hometown, Patricia Dombrowski, aka Patti Cake$, hopes to follow in the footsteps of her idol and hit the road to achieve stardom as a rapper. With help from her best friend, a mysterious musician and her loving grandmother, Patti leads the charge against an army of haters, unpaid bills and the broken dreams that are holding her back.

A big girl, with big dreams and big problems. One would be forgiven for thinking that “Patti Cake$” is an imitation of “Precious.” However, there is enough charm and unequivocal joy found within “Patti Cake$” to help set it apart. The film even makes mention of the “Precious” comparisons at one point. What helps this film rise above those comparisons and predictable storytelling are the lead performance of Danielle Macdonald and the film’s rap music which is so catchy in its own right, that I immediately wanted to download it to my iTunes playlist once it was over.

Patricia Dombrowski (Danielle Macdonald), is a white New Jersey girl with a big figure and big dreams of making it as a rapper. Talented but constantly being held down by the society around her, she finds her chance when she forms the rap group “PBNJ” with her friends Jheri (Siddharth Dhananjay) and Bastard aka “The Antichrist” (Mamoudou Athie). With support from her grandmother (Cathy Moriarty), despite the lack of support from her own mother (Bridget Everett), Patti takes a stand against her critics, her own insecurities, and life problems to do what she truly loves.

“Patti Cake$” is an independent film that is not the most well-shot film you’ll see all year but it is one of the best edited. I was seriously impressed with the editing on display within this film. From quick hard cuts to pictures of a younger Patricia, to our lead character being placed within dream sequences of her superstar life on stage, to certain sequences in the film being edited to the beat of the music, much like “Baby Driver” earlier this year, “Patti Cake$” has an energy and optimism about it that is too hard to resist.

Every year, a complete unknown emerges as a new star. Much like Rebel Wilson but with more dramatic and less comedic talents, Danielle Macdonald puts her foot forward as one of the most exciting new talents to come out of 2017. It’s not only her rapping skills that earned her this title. There is a unique screen presence and vulnerability that seeps through Macdonald’s performance which helps to prove that there is much for this young actress to still explore. One can only hope that she doesn’t fall into any traps regarding her weight within Hollywood and refuses roles that objectify and humiliate her, even if it is for comedic effect. Keeping up with the “Precious” comparisons, while she may not get an Oscar nomination as Gabourey Sidibe did, Macdonald reminds me of Sidibe in how comfortable she appears in her own skin and how much she has to offer us. The other performances in the film are believable. Siddharth Dhananjay and Mamoudou Athie who make up “PBNJ” with Macdonald are both fine but it’s Cathy Moriarty and Bridget Everett as Patricia’s aunt and mother who help to give the movie more dramatic effect and help to elevate the film overall.

A pure joy in almost every single way, “Patti Cake$” may not offer anything new in terms of story but it does present a new star to us in Danielle Macdonald. She carries the film with confidence and is backed by some very catchy tunes which not only help to showcase her talents but will hopefully help this tiny film about following your dreams an audience too. Despite all of the ways that there are to make music nowadays, “Patti Cake$” reminds us how difficult it is for someone to still make it in the music industry even with all of the talents that Patricia possesses. However, there is something joyous and irresistible about seeing a group of misfits who are all dealing with their own issues, coming together to create art because it is what they love to do. A few minor quibbles here and there but when you have Cathy Moriarty singing the letters “P, B N J” into your ears in her raspy voice, what is there not to like?