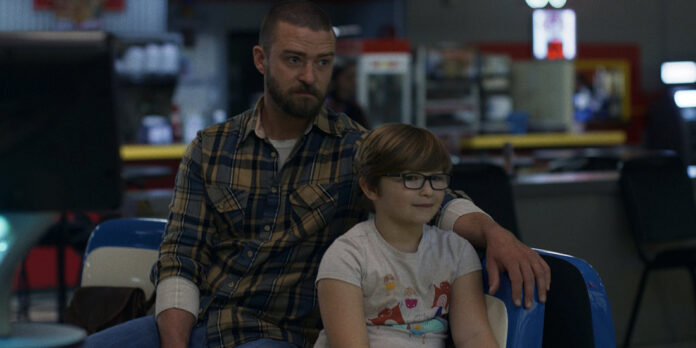 THE STORY – After 12 years in prison, former high school football star Eddie Palmer returns home to put his life back together and forms an unlikely bond with Sam, an outcast boy from a troubled home. But Eddie’s past threatens to ruin his new life and family.

From roles in prestigious films like “The Social Network” and “Inside Llewyn Davis” to comedies like “Bad Teacher” and “Friends with Benefits,” Justin Timberlake has more than earned the right to be called an actor, rather than a singer who is in movies. And yet, it’s surprising to see him at the center of an earnest drama about a man returning from prison and being transformed by the relationships he builds. It’s the sort of troubled-man-turned-good role that you would expect to see an Affleck brother in, yet Timberlake manages to nail it.

Fisher Stevens’s “Palmer,” with a script by Cheryl Guerriero, attempts to stand out from movies of this type. Eddie (who goes by his last name, Palmer) was a high school and college football star but ended up serving years in prison. After getting out, he returns to his hometown in Louisiana to live with his grandmother Vivan (June Squibb). Vivian is caring for her young neighbor Sam (Ryder Allen), whose mother has once again abandoned him.

Palmer finally finds a job working as a janitor at the local school, despite his criminal record, and starts to turn his life around as he bonds with Sam. He even begins a relationship with Sam’s teacher, Maggie (Alisha Wainwright). However, there are all sorts of obstacles that challenge Palmer and threaten to upend the life he’s trying to build for himself.

Some of these are what you might expect from this sort of film: drinking at the local bar and getting involved with his troublesome old friends. However, the film doesn’t spend too long dwelling on the quarterback’s lost potential or the potential to return to bad behavior. Instead, there are somewhat unexpected challenges continually thrown their way.

Timberlake does a good job holding the film together and gives a moving performance without it ever feeling overacted. He does have a crying scene and a big fight scene, but they feel natural for the character. Despite it being different from roles he has played in the past, he plays the sullen and reluctant father-figure well.

The most interesting thing about the film is the character of Sam, a boy who likes traditionally feminine things like playing dolls, helping Vivian with her hair, and a flying princess television show. His classmates bully him for this and at first, Palmer himself pushes back against it. But the movie’s real beauty is watching Palmer come not only to support but defend Sam’s right to enjoy these things. Allen does a fantastic job with the role, making it seem believable and never stereotypical.

The love story is also somewhat unique, partially in that it provides little drama. Instead, the film allows it to be the strong foundation for Palmer’s continuous change. Maggie is also not what you might expect from this kind of movie: she’s a divorced teacher who has moved to small-town Louisiana from Atlanta and definitely has more of a city-vibe to her. Wainwright is charming in the role and also exudes the right kind of teacher energy that makes it easy to see why Sam would be comfortable taking his issues to her.

While at first glance, the film seems like something we’ve seen before, it actually introduces subtle nuances that make it something a bit different — and perhaps, better. It does become overly dramatic at moments and it seems to take on more than it can handle, especially as it veers into abuse and drug use, which it doesn’t take the time to explore with great nuance. But if nothing else, “Palmer” is worth watching to see Timberlake pretending to drink tea from a tiny pink tea set.