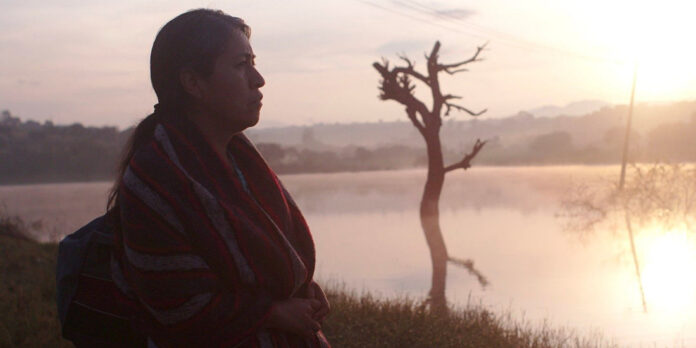 THE STORY – A woman tries to find her son’s whereabouts after he leaves Mexico to find work in the United States.

​It is quite an experience when one is invited to watch a truly invigorating piece of work unfold. There is a power in particular stories that allow one to become enchanted by a landscape that is both familiar yet seems newly discovered. This is especially felt if the artistic voice behind it offers a revealing truth that is communicated through a fascinating lens. These are incredible studies in motivating in-depth examinations in layered characters, and that is often a thrilling encounter to make. “Identifying Features” presents a compelling case for a genuinely inventive story that is boldly executed and thoroughly stimulating.

Set near the northern Mexican border, the story revolves around a community that is suffering from a recent tragedy. Two young men, though more accurately described as boys, abruptly leave their town to find job opportunities in the United States. After an extended period without contact, their mothers are seeking answers. One son’s body was found, but for Magdalena (Mercedes Hernández), there is still some question as to whether her child is still alive. She decides to embark on her own expedition to find answers. Along the way, she crosses paths with another traveler, Miguel (David Illescas). He has recently been deported and is making his way back to his family. The two support each other in their journey and to find the revelations they desperately need, no matter how treacherous the road or dire the circumstances.

It’s almost difficult to imagine that Fernanda Valadez makes her feature directorial debut here. There is such an accomplished artistry to the filmmaking that crafts a meditative and occasionally stylized character study. The enchanting cinematography leaves every frame with a sense of menace and intrigue with its impeccably designed compositions. Even the droning score effectively builds the quiet tension in subtle ways that reflect the strong emotions that simmer just beneath the surface. All of these elements feed into a compelling mystery that keeps one invested throughout. Valadez’s extraordinary direction results in a display of dreamy imagery that emphasizes a rich commentary and an intimate perspective.

Said commentary, as constructed by Valadez and Astrid Rondero’s screenplay, is one that looks to analyze the anguish that is felt in so many immigrant stories. However, the reflection here is not just on the individual making the trip into a new world. It is the pain that’s left behind and the guilt and grief that surrounds those forced to deal with the shards of an altered life. Still, there is no pitiable judgment laid or sensationalized exploitation felt. While the characters themselves can be a bit shallow, their presence is more to explore this story’s themes. One does miss more nuanced characterizations, but the script peels back layers in a captivating way. Its progression does contribute to some pacing efforts that feel strained at times, but it leads to a thematically rich conclusion that is entirely arresting.

Hernández carries nearly all the film’s emotional weight on her shoulders, and she delivers a completely devastating performance that is so engaging. There’s hardly a moment when one isn’t taken in by her inviting gazes that signal so much turmoil that it’s internalized to a masterful degree. She holds the space in a way that immediately draws one to her face, so weary with anxiety yet determined on her mission. There is pride and heartbreak conveyed in subtle methods, and she ends up delivering an absolutely astounding turn. Illescas is impressive as well, demonstrating a quiet strength with an equal amount of devotion to his cause. Yet when the vulnerability needs to be seen, it’s felt just as earnestly. Their performances match the tone of this piece, a steadfast desire to find the courage to persevere even when the world deals nearly supernatural obstacles in your path.

Nearly every moment of “Identifying Features” is a masterful presentation of a provocative narrative. The filmmaking creates a somber mood that is never oppressive with its melancholy but instead showcases a steadfast determination that is visually rich. The direction works well with a script that mines great thematic material out of a story that looks inward on the tortured emotional journey these characters must face. The performances are all outstanding, with particular notice to an alluring central role. All of that more than compensates for the few occasions when the pacing slows or the depth of certain characters feel shallow. Any deficiency doesn’t take away from one of the great cinematic achievements that many will see in this new year.