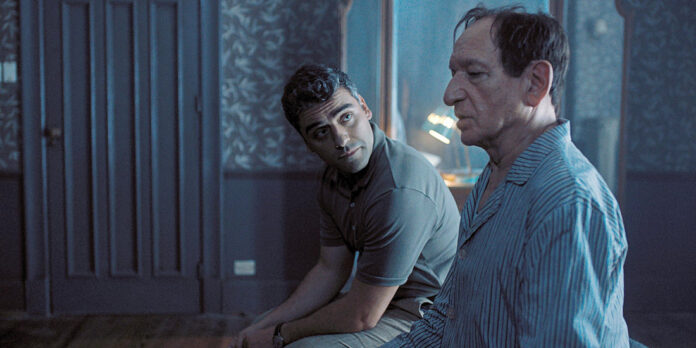 THE STORY – Fifteen years after the end of World War II, a team of top-secret Israeli agents travels to Argentina to track down Adolf Eichmann, the Nazi officer who masterminded the transportation logistics that brought millions of innocent Jews to their deaths in concentration camps. Hoping to sneak him out of the country to stand trial, agent Peter Malkin soon finds himself in a gripping game of cat and mouse with the war criminal — with life and death at stake.
​
THE CAST – Oscar Isaac, Ben Kingsley, Mélanie Laurent, Lior Raz, Nick Kroll & Haley Lu Richardson

​​There’s little else more satisfying than a good ol’ movie about Nazis getting their just deserts. “Operation Finale,” director Chris Weitz’ latest endeavour, seems to possess some winning cards– a first-rate ensemble cast led by Oscar Isaac and Ben Kingsley, a script based off a fascinating and crowd-pleasing true story, and what you’d call “built-in” high stakes– but unfortunately, nothing really clicks into place as it should. Much of this film’s failings can be indebted to its irritatingly formulaic nature and half-assed efforts at creating intrigue and character depth. It’s almost as if the writers felt they had such an interesting story, they only had to meet the audience halfway.

It’s fifteen years after the end of World War II when the Israeli special intelligence agency, Mossad, receives word that Nazi criminal Adolf Eichmann (Ben Kingsley) is hiding under a pseudonym in Buenos Aires. Whereas Hitler, Goebbels, and Himmler evaded justice by committing suicide, Eichmann, one of the chief architects of the Holocaust, continues to live unmarred by the just consequences of his actions. As prime minister David Ben-Gurion (Simon Russell Beale) explains in an urgent speech to Mossad operatives, the capture and formal charge of Eichmann in an Israeli court would represent the first time in history where Jewish families and victims of the Holocaust could “judge [their] executioner.” You could say the pressure is on.

Led by flawed, fearless leader Peter Malkin (Oscar Isaac), Mossad operatives played by Melanie Laurent and Nick Kroll amongst others, go undercover in Argentina to carry out a plan that involves capturing Eichmann outside his home and sneaking him aboard a plane bound for Jerusalem. Naturally, closeted nazis and Argentine bureaucrats get in the way by stalling their departure unless they can obtain a signature from Eichmann himself proving his consent to leave the country.

The first half of the film details the events leading up to Eichmann’s capture punctuated with generic “preparation” montage sequences that add little else aside from close-ups of Isaac in concentration and extra time. Generally with this sort of storytelling conceit, what’s being prepared seems unorthodox or at least difficult so that the execution feels impressive, a clever arrangement of the puzzle pieces. There’s no such innovation here– just some fake passport photo shoots, domestic arrangements, and Isaac’s admittedly laughable assault training– though we occasionally get some (ultimately pointless) sexual tension between Isaac and Laurent. When the team’s original plan to kidnap Eichmann is somewhat derailed by an errant bus schedule, it’s unconvincing that things would’ve gone any smoother had everything gone according to plan. Here, as in the climactic showdown at the airport tarmac, any built-up tension goes limp and audience investment is stunted by obvious artifice.

The second act salvages some merit points by simply thrusting Isaac and Kingsley in a prolonged tête-à-tête where Malkin attempts to butter Eichmann up into signing the consent papers. Malkin, of course, has his unique set of grievances against Eichmann, so the stage is set for a break-down on both ends. Perhaps the best scene of the entire film involves Isaac giving Kingsley a precarious shave with a straight razor. Not what you’d call original, but in the hands of Isaac and Kingsley, the power dynamics of vulnerability and control are suggestive and thrilling.

Isaac delivers a decent performance for Isaac standards, though moments of punkish playfulness contribute to the movie’s tonal inconsistency. Malkin as a character ultimately feels haphazardly constructed, not so much lacking in legitimate traumas or backstory, so much as his relationship and emotional connection to these histories feels insufficiently fleshed out, reliant on slivers of a flashback. Meanwhile, Kingsley’s Eichmann occasionally steals the spotlight all to himself; his depiction of the notorious Nazi bureaucrat is chilling, disconcerting, funny, sometimes even charming, carrying all that haughty, slimy, over-educated demeanor of someone that has rationalized the irrational.

If the story is enough to get you to the theater, then “Operation Finale” makes a fine, occasionally compelling re-enactment of true events. As for the movie bringing to life the capture of Adolf Eichmann and all of its dramatic and political intricacies– not so much.